Your favourite days out round Leeds
Post Reply
48 posts

There's a great shot of the old scratching shed about 4 minutes into this clip of George Best.http://www.youtube.com/watch?v=nplemK3Y4nsIwas at this game - 2-2 draw if i remember correctly. If you look closely you can see Jack Charlton and gary Sprake arguing as to whose fault it was as Best celebrates!
there are 10 types of people in the world. Those that understand ternary, those that don't and those that think this a joke about the binary system.
Top

Some great clips on there, earlier in the piece he scores one against us at the boys pen (kop) end. It was great to see big jack and Sprakey at it, proper passion, unlike today sadly.
Top

Loinerpete/Drapesey,Hopefully, you are still active on this site and able to help with some queries. You may have seen another thread I started entitled "Monksbridge Iron Company". It relates to info about Elland Road that I wanted to find some details on. I think it is more relevant to this thread, so I have transferred my questions to here.If you can help with any of this, would be eternally grateful.1. Did Monk's Bridge Iron Company own land on the west side of the current Elland Road site? Several websites detailing the history of the ground state that the club bought land on the Gelderd Road and Churwell side of the ground in 19062. When did the Greyhound stadium open? I know it closed and was immediately demolished in 1982, but when did it open?3. What was the cricket ground that Holbeck Cricket Club played on generally known as? 'Holbeck Cricket Ground', 'New Peacock Ground' or something else?4. If Holbeck cricket club folded in 1962, and we presume the ground was used for Sunday league football thereafter, when did the ground close?5. Did the New Peacock close and get demolished in 1974?6. I know Holbeck Cricket & Rugby Club moved from the Holbeck Recreation Ground in 1897 when it was demolished for housing. The Rugby club moved onto the Elland Road site that is now the football club (bought from Bentley's Brewery) and the cricket club moved next door over Lowfields Road, but who owned that land before? 7. On a slightly different subject, there are several mentions on Leodis of a 'Slum Clearance' around Elland Road in 1959. What exact area was this and was this prompted by the eventual building of the M621?8. I have seen mention on Leodis of a Tripe works on Elland Road that sued to supply free tripe to the Old Peacock on matchdays. Does anyone have details of where this was/what is there now? What it was called? and between which years it was operational?Many thanks for any info you can give me.Regards,Jon
Top

Loinerpete wrote: Since 1963 some of my best days out were at Elland Road. Is there anyone out there still alive that remembers the pitch being parrallel to elland road???...it was changed more than once until its present layout was decided on in the mid 1920`s....this picture is from 1923 and shows clearly the roof of the old peacock and the garage building next door on elland road with the touch line parallel . Can anyone give dates as to when these changes occurred?? i think the final position was settled with the building of the scratchin shed (aaaah the scratchin shed) I am intrigued by this photo and the conversation that has followed its posting, albeit 5 years ago now. I can only hope somebody is still browsing this site that has an interest in this issue.I agree with Loinerpete's assertion that the Elland Road pitch orientation was moved several times until the mid 1920's, and I agree that the photo he posted possibly shows the United Garage and the original Old Peacock in the background (before it was re-built I believe the Old Peacock was much nearer the road than the current one).However, if this photo is dated as 1923 and allegedly shows the Scratching Shed in the background, then how come the stand behind looks nothing like the Scratching Shed? We all know the SS had a shallow terrace with a barrelled roof. This appears to have neither. It has seats in an upper section with a small standing section at the front.I am not suggesting this isn't Elland Road, but I can't place this stand, and I cannot put a date to this photo. There has only ever been housing/buildings visible behind the south stand side, that much we know. Unless there was another stand on the south side of Elland Road (ie. the one in this photo) before another terraced stand was built in its place and roofed to form the Scratching Shed we all know, then this photo can't have been from 1923.Agree with all Loinerpete's other remarks, but something doesn't quite add up with regards the date of this photo.Any further info welcome.
Top 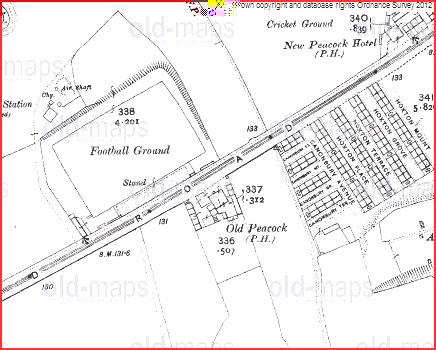 Why was it called The Scratching Shed?
Sit thissen dahn an' tell us abaht it.
Top

uncle mick wrote: A 1921 map which shows the pitch the same way as it is today Thanks Mick, this does suggest that the date of 1923 on the above photo can't be correct. I know the orientation of the pitch was decided on 'in the mid-20's', 1921 may seem a little early, but I have no reason to doubt the date on your map.I would still love to know how the stand on the photo can be described as the Scratching Shed. For me, it can't be.
Top

Chrism wrote: Why was it called The Scratching Shed? Chris,Funnily enough I have just been writing about this. From what I can find "...The Scratching Shed earned its name purely through informal use of the phrase growing from the stands resemblance to a barn. The barrel-shaped roof and rudimentary brick rear wall always reminded fans of a farmyard building housing livestock scratching around for food, rather than a football terrace, and the suitably agricultural name was adopted"I would love to know if there are any other explanations.Thanks
Top
Post Reply
48 posts