There is what looks like it would be very colourful glazed glass at the Kirkgate Chambers on the Kirkgate Markets side of the Kirkgate/Call Lane junction. The glass is however very dirty and in need of a good clean. Passing by on January 22 2019 some men were doing measurements at the site so perhaps something may be about to happen. Passing again several minutes later the men had gone so I took these photos. The nice glazed glass can be seen but their colour is sadly not really evident due to the dirtiness. 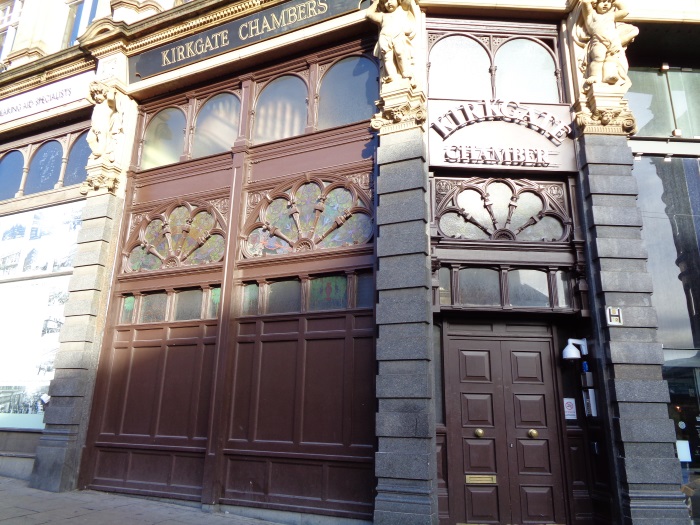 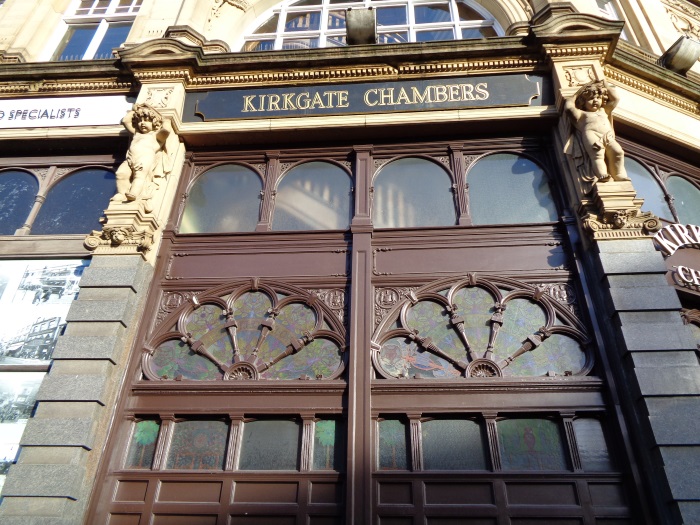 Nice photographs pity the bottom does not live up to the outside look. Just about has dead has a dodo most of the week i think there are plans on the agenda they have done a good job of killing the market off.
No matter were i end my days im an Hunslet lad with Hunslet ways.
Top

Some years ago Kirkgate Chambers were the Leeds and District Anglers Federation and though i never ever went upstairs my self that door on the corner was the way in.. I am sure there were other offices in use up there as well. The Market of years ago used to attract people from out of town because of the different things on offer from Fresh Meat, Fresh Fish, Game and frozen foods. There was also multiple other Trades, shoe repairers, Hairdressers ect.
In those days the Barrow Boys worked in a line down the road from Vicar Lane to where the Original Police Station used to be and only on certain days.
On a recent visit to Leeds i called in and it looked like a glorified Car Boot / Bazaar
Top

Hi Jack i think the council have long term plans for the bottom of the market its a listed building but i would have thought that would be the top.I dont think they want the type of traders that were there in the past and the ones that are left can be got rid of by doing what they did with the Corn Exchange before they sold it, to make it unprofitable by putting up the rents so they have a clean slate to either sell it or refurbish it, watch this space.
No matter were i end my days im an Hunslet lad with Hunslet ways.
Top

I don't recall the Leeds and District Anglers Federation but, for decades, I was a member of the Leeds and District Amalgamated Society of Anglers. In the 1950's, the club premises were at 3 - 5 Beckett Street, which was an old mansion-type house. I used to go to prize-givings there when I took part in the 'Juvenile Match', which I won a couple of times. The club moved to new premises in Nippet Lane/Stoney Rock Lane, a few years later, and is still there. Is this the same organisation?

I was driving down Wide Lane home to Beeston on the 13th. December 1975 (my Birthday) and saw a large plume of black smoke which was quite obviously somewhere in Leeds. In those days of no mobile phones i had no idea of what or where it was. I do recall it was a Saturday about 6 pm as i had a Fruit and Veg. business in Morley Market and was looking forward to getting home after a long hard days trading just before Christmas .
As tilly remarked Don't see how what was left could be described as a "Listed Building"
Top

I remember the day of the fire very well. We had only been living in Gildersome a few months and as we were coming home from Leeds up Gelderd Road there were some Travellers camped on the general area of what had been the Oswalds and Danubes. The were making a bonfire from floorboards etc. When we got home, I looked out of our back bedroom windows which give a good view right across Leeds. I remarked how well they had got the bonfire going but it was Kirkgate Market. We also had a clear view of the fire at Moorhouse's on Old Lane and the Tri-star jet which overshot the runway at LBA.
Top

Hello Ian,
If was just the Offices i was referring to in Kirkgate although i visited the Anglers Club on a few occasions.
My memory is a bit hit and miss these days but i seem to recall that the office was the place where you got or renewed your year book. The entrance was certainly on an angle and there was a Brass plate either on the door or wall outside.

(Can I have bed by the Window Nurse)
Top

According to old phone books, I think that the L&DASA was at 3 - 5 Beckett Street in 1956, so it must have been in Kirkgate Chambers prior to that date.

So far as relates to the fire at Leeds Market on 13th December 1975 - at that time I was a D.S. on the Leeds Burglary Squad, but I was still a member of the Social Club at Dewsbury Road Police Station, where I had previously served in the C.I.D. On that afternoon, along with my wife, I had taken my two sons to the Police Station Children's Christmas Party at St Anthony's Church Hall in Old lane. As we returned home, around 6pm, I was driving along Beeston Road and down Beeston Hill, towards Elland Road, when I saw the fire in the City Centre. Obviously, I didn't know where the fire was at that time. During the evening, it was announced on the local radio and television. It's funny how you remember where you were when significant events took place.

Another thing that I remember, relating to this area (your territory), and (I think) the same date was attending a really bad traffic accident. I am fairly certain that it was on 13th December 1972. I was a uniform sergeant at Dewsbury Road Police Station and around 8am I got called to an accident at the junction of Millshaw with the Ring Road. When I got there, it was chaos. There was a Morris Oxford/Austin Cambridge type car, which had been travelling from the direction of Churwell towards Pudsey, smashed up into the side of another vehicle. The other vehicle was a yellow Lotus Europa sports car and the Morris Oxford was embedded into the off side of it. The driver of the Lotus was still in the car trapped by his legs, feet and body. He was alive but only just. Petrol was leaking into the road and there was imminent danger of a fire. Apparently, the driver's wife had been in the car with him but she had managed to get out. She was seated on a stool, which a local resident had provided, at the side of the road, crying and watching what was taking place. We tried, in vain, to get the driver out but he died. Eventually, the fire brigade arrived and got him out of the car and then dealt with the petrol spillage. What happened was that the Lotus was being driven from the direction of Cottingley towards Beeston and there was heavy rush-hour traffic. The Lotus driver intended to drive across the Ring Road and carry on towards Beeston Town Street. When the driver reached the Ring Road, on Millshaw, he took the inside lane as there was queueing traffic in the outside lane waiting to turn right. He quickly pulled out, immediately infront of the Morris car, and the collision occurred. The Lotus driver had had no chance. That model of Lotus stands (I think) less than four feet high and the bodywork was fibre glass. The Morris Oxford type car was a heavy substantial car. I later learned that the Lotus driver was due to change the Lotus for a Range Rover, a few weeks later, in the new year. If he had been in a Range Rover, at the time of the accident, he would have probably survived.

I apologise to Leodian for going 'off topic'.