There's a thread which mentions it here:

If you check out both churches on Wikipedia and Genuki Leeds you will find that St Mary's Church, near to Mabgate, was built before Mount St Marys' Church on the Rock/Richmond Hill. I think that Mount St Mary's was built because of the Irish Roman Catholic population which settled in the area during the 1840's due to the famine in Ireland.

I think St Mary's Quarry Hill, was one of three Waterloo churches built in Leeds.
Top 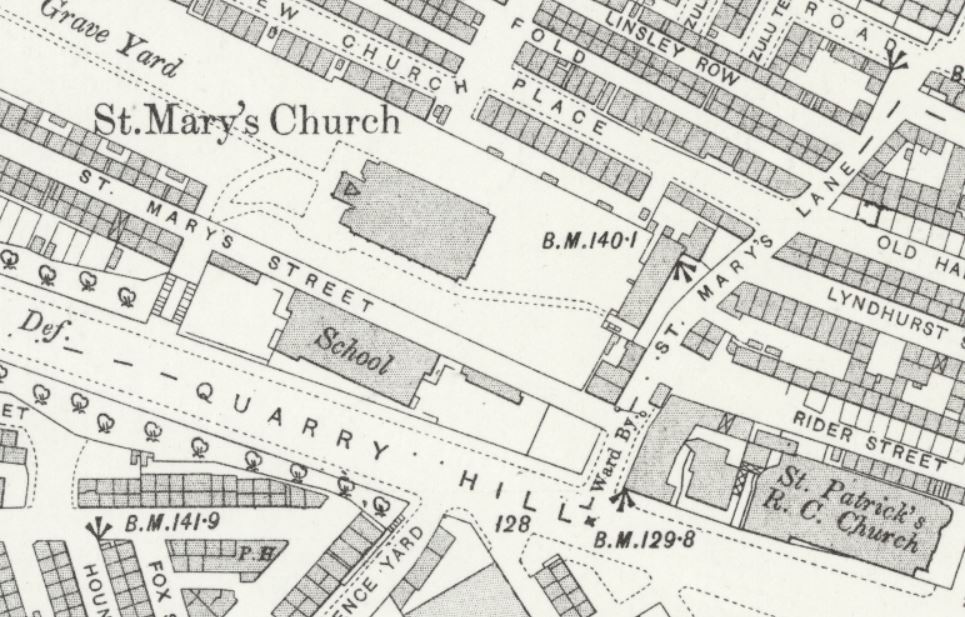 Thanks again for the prompt replies.
I do not understand why such a Church as St Patricks with two impressive doorways only seemed to use the smaller one at the side, Unless it was just for more Important occasions In later years it was used but then again it was not long before the York Road Flyover was built and then driving over ( as of now ) there is not much more than the Church Roof to be seen. Don't know what all the adjoining buildings are used for these days. In my day there was a thriving "Market District Boys Boxing Club " plus Boy Scouts and Cubs Meetings.

That reminds me that St. Anne's Cathedral only used the side entrance. The only time i saw the Doors open at the front was for some Episode of a T.V. where the Villain rang out and was killed .
Top

This is a Great book for Photos of how the City developed during the 1950s to the late 1970s. Even though it was Published by the Yorks Evening .

This is a 200 page Really Good Read and i should think a copy might turn up in a second hand book shop or a Car Boot Sale. It really is worth looking out for.
Top

I have not seen the book. It sounds very interesting and I will look out for it.

Officers doing ‘Point Duty.
In those days most of the Police Divisions had some traffic points which were usually manned between about 8am until 9.30am and from about 4.30pm until 6.30pm. Millgarth Police Station, which covered the city centre, manned the City Square traffic point at the bottom of Park Row near to Boar Lane. There were not so many sets of traffic lights and roundabouts in those days.

As an example of traffic points, when I first joined the Leeds City Police in 1965, I worked at Upper Wortley Police Station and there were traffic points at (1) Wellington Road/ Armley Road, (2) Wellington Road/Spence Lane and (3) Leeds & Bradford Road/Broad Lane/Bridge Road/Wyther Lane. In addition to these traffic points, there were many School Crossings which had to be manned, usually from around 8am until 9am, 11.50am until 12.30pm, 1pm until 2pm and 3.30pm until 4.15pm. The times differed, depending on the schools. Some of the crossings were manned by ‘Lollipop Men/Women’ but the ones on busy main roads were usually manned by the Police. As an example on the ‘Armley Beat’, where I often worked, there were crossings to be covered at Castleton School, the Armley ‘Clock’ School and Armley Park School – all within half a mile of each other on Armley Road and Stanningley Road (and there were many others on other beats within the division). In those days, most of us worked on Velocette ‘Noddy Bikes’ but still had to cover these commitments. Some officers worked on foot patrol and on an ‘early turn’ shift (6am – 2pm) an officer might have to cover up to three school crossings or maybe a traffic point and two crossings. Meal breaks were 45 minutes for male officers (60 minutes for women officers). In addition to this, we had to answer force radio calls and do our own follow up enquiries for routine police work e.g. taking statements, arresting suspects and other enquiries, etc. In those days, there were no personal radios but the Velocettes had radios. All Leeds divisions had similar numbers of traffic points and school crossings.

So far as relates to the City Square Traffic Point – at the times that you mentioned, there was an officer called PC 681 Nobby Clark who worked at Millgarth Police Station and he spent most of his time doing traffic duty. He was very good at it and motorists could tell if he was on duty as the traffic was more ‘free flowing’ around City Square. If other officers were on that traffic point, then there tended to be more traffic jams. Nobby retired around late 1964 or early 1965 as, when I joined, I was allocated his collar number.

Sunbeam Tigers.
The Road Traffic Department, which was in Belle Vue Road at that time, had two Sunbeam Alpines (white, I think), which they first acquired around 1959 and two MGB’s (fawn and light blue). They were replaced with Sunbeam Tigers (white) and MGC’s (white). Although the cars were convertibles, they also had black detachable hard tops. They later changed over to Mini Cooper ‘S’s which were, originally, all multicoloured e.g. red with a black roof, white with a black roof, blue with a white roof, green with a white roof, etc. These cars were great for use in the city as (at the time) they were high powered, small and ‘nippy’. The traffic cops could usually chase and catch anyone in more high-powered cars due to their superior driving ability and training. The only time that they had difficulty was if they had to chase a high-powered car (at that time) such as a Jaguar or Rover on long straight roads such as York Road heading out of the city. The Road Traffic Department also used to get cars to test for manufacturers. I can remember a massive Ford Zodiac/Ferguson Four Wheel Drive which was just too big and clumsy for city use, the early Triumph 2000’s and 2500 PI’s and also the early Rover 2000’s and 3500’s. Some of these cars were later adopted for permanent use. You mentioned the Chief Constable Jim Angus (who was a great bloke) – the force bought a dark grey Rover 3500 as his official car but it hardly ever got used, as he didn’t like it. The mileage was very low and in order to put some miles on it we would often used it when we had to go on long trips for prisoners or on far away prison visits. There was some arrangement where the force could not get rid of it until it had done something like 100,000 miles. I can remember going to Scotland in it, to put some miles on, to pick up a prisoner.

I, personally, did not know the Policewomen Christine Ingham or Rita Mogg.

Police car with illuminated sign.
As far as I can remember, prior to 1968, not many of the Leeds City Police vehicles had ‘Police’ written on the sides. The Road Traffic cars had roof signs and the sports cars (mentioned) had some small signs on the front and back. I think that the ‘noddy bikes’ also had ‘Police’ written across the windscreens. In those days, after the ‘noddy bikes’ had been introduced, there were about a dozen in each Division and they were ridden by constables and sergeants. Inspectors usually used a plain car. Some of the larger vans had signage on the sides.

In 1968, ‘Unit Beat Policing’ was introduced and ‘Panda Cars’ replaced the ‘noddy bikes’. The first ‘Panda Cars’ (beat cars) were light blue Vauxhall Viva’s with a white door. They had ‘Police’ written down the sides and they had roof lights (Police/Stop). Other forces used all types of cars for panda cars, some were black and white, blue and white or just a plain colour. Many of the rural forces used Mini Vans (usually grey).

I hope that you have found this post of interest, other ex Leeds police officers may be able to provide further information, or correct any errors that I have made.

Good Morning Ian,
Thank you or your quick response.
As i am catching a Train to leeds in a couple of hours shall have to keep my reply brief for now.
This is about A.4. size, "Leeds in the Fifties, Sixties and Seventies" It was first published in 2009 by The Breedon Book Publishing Co.
Breedon House, The Parker Centre, Derby DE21 4SZ.
Also in Paperback edition published in 2012. ( same Company )
Pictures etc. Copyright of Y.E.P.

When it was still Leeds City Police, your mum worked in "B" Division (Chapeltown and Gipton) Admin.

After amalgamation in 1974, the divisions were all reorganised and I've a feeling she worked at Brotherton House.
Top
Post Reply
207 posts