It seems that the installation work of the baffles may have ended (at least for now?) as there was traffic again on Water Lane when I took this photo on November 2 2017 (the road was still blocked there on at least October 24 2017). There is however work going on at Bridgewater Place with some of that work seen but some is not seen off to the right of the photo. Note that as usual with photos I post I have greatly reduced the image file size but that also results in a loss of quality. 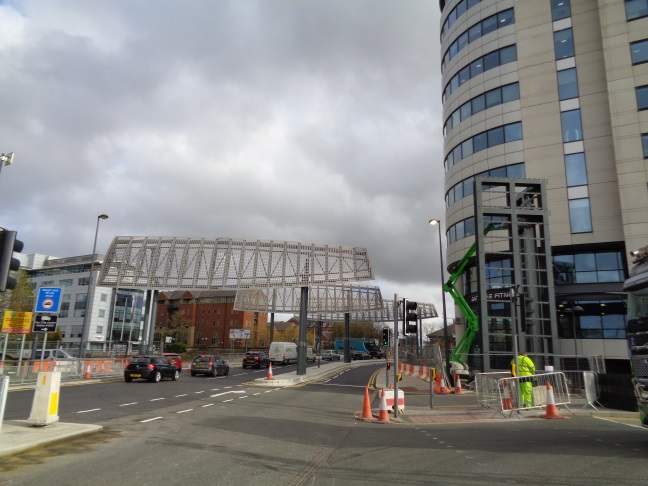 I would be quite happy with the quality of this photograph leodian thanks for the information all the best Sid.
No matter were i end my days im an Hunslet lad with Hunslet ways.
Top

tilly wrote:I would be quite happy with the quality of this photograph leodian thanks for the information all the best Sid.

. I had for fun thought of posting an image of twigs/branches loading into a shredding machine to see if I got a twig loading error but I have not readily found a suitable still image (I have an odd sense of humour

).
A rainbow is a ribbon that Nature puts on when she washes her hair.
Top

It would be interesting if we had a lot of snow this Winter. I've been past this junction a couple of times recently and wondered what might happen if we had a build up of the white stuff on those contraptions. A potential avalanche? The mind boggles.
Top

Hi jma the so called experts will not have thought of anything like that they will probably think of something to deflect the snow off of the wind deflectors.
No matter were i end my days im an Hunslet lad with Hunslet ways.
Top

Are the Company that own / had this thing built now going to pay the costs of erecting and the maintenance of these contraptions or is it going to be the Leeds taxpayer ??
Top

tilly wrote:Hi jma the so called experts will not have thought of anything like that they will probably think of something to deflect the snow off of the wind deflectors.

Tilly while I see where JMA are coming from I am on this less skeptical that the authorities won't have this covered (no pun intended).

Although much closer together and perhaps slightly more struts to achieve the desired shape I think they could be compared to the long gantries prevalent on "managed" motorways but also common on normal motorway. I suspect very little snow sticks and that which does will soon build up a critical mass such that it dislodges itself in snowball sized lumps that aren't compressed and therefore carry little weight.

I agree with your comment on Leodian's photograph. I'd be perfectly happy with that standard too and we are lucky enough for Leodian to be posting his photography on here.

Finally. There apppears to be quite a lot of work going on to Bridgewater Place. There has been scaffolding around at ground floor level on the Victoria Road frontage and round as far as the Grove pub for several months now.
living a stones throw from the Leeds MDC border at Lofthousehttp://tykebhoy.wordpress.com/
Top

Many thanks for your reply tyke bhoy have a nice week end.
No matter were i end my days im an Hunslet lad with Hunslet ways.
Top

I really do hope you are right. If it wasn't clear, my comment about the snow was a bit tongue-in-cheek. I might just as easily have suggested that the wind passing through those baffles might work a bit like an Aeolian harp. That's all to reduce the anger I feel about the incompetence that got us into this mess. Back to the heavy irony, they do say that the nearby Tetley's closed when they finally gave up the search for social secretary.

On a quick two day visit i decided i must see this Building close up. already overwhelmed by the amount of high faceless buildings around there we headed for this High Monstrosity. just as ugly were the Baffles stationed either side of the road.The onward journey i made through the City Centre culminating at the end of Globe rd. onto Wellington St. was just a blur of glass faceless buildings jammed in side by side. I do hope there are sufficient emergency plans in place should there be (God Forbid) some calamity.
Though i still miss my Hometown after many years away there is (at my age) no chance of me ever heading in that direction again.
Top
Post Reply
37 posts