tilly wrote:First hi Bill i always look at your photographs on flickr always give you a like star.You are right about us having the same interests but then we were kids at the same time thanks for your reply.Hi volvojack the tram ride through miggy woods was like being on the big dipper at Blackpool i must say i did more walking than riding used to walk up the niaga line dont know if thats how you spell it, joined it at Jack Lane up to the coal staiths on Hunslet Moor. The tram did a right there up to miggy we would walk past Park Side rugby ground up to farmer Wards field the leave the track and go up to miggy clearing good days.

Hello again, just to let you know the tracks were called the Niger lines named after one of the early locomotives to run on them. Me dad said when he was a kid in the late 1910's early 20's him and his dad would go scrattin on the Niger lines lookin for lumps of manganese which the old rails were made of. By this I mean old to them 100 years ago!

Attached is a pic of tram seats, are these the type you mentioned? 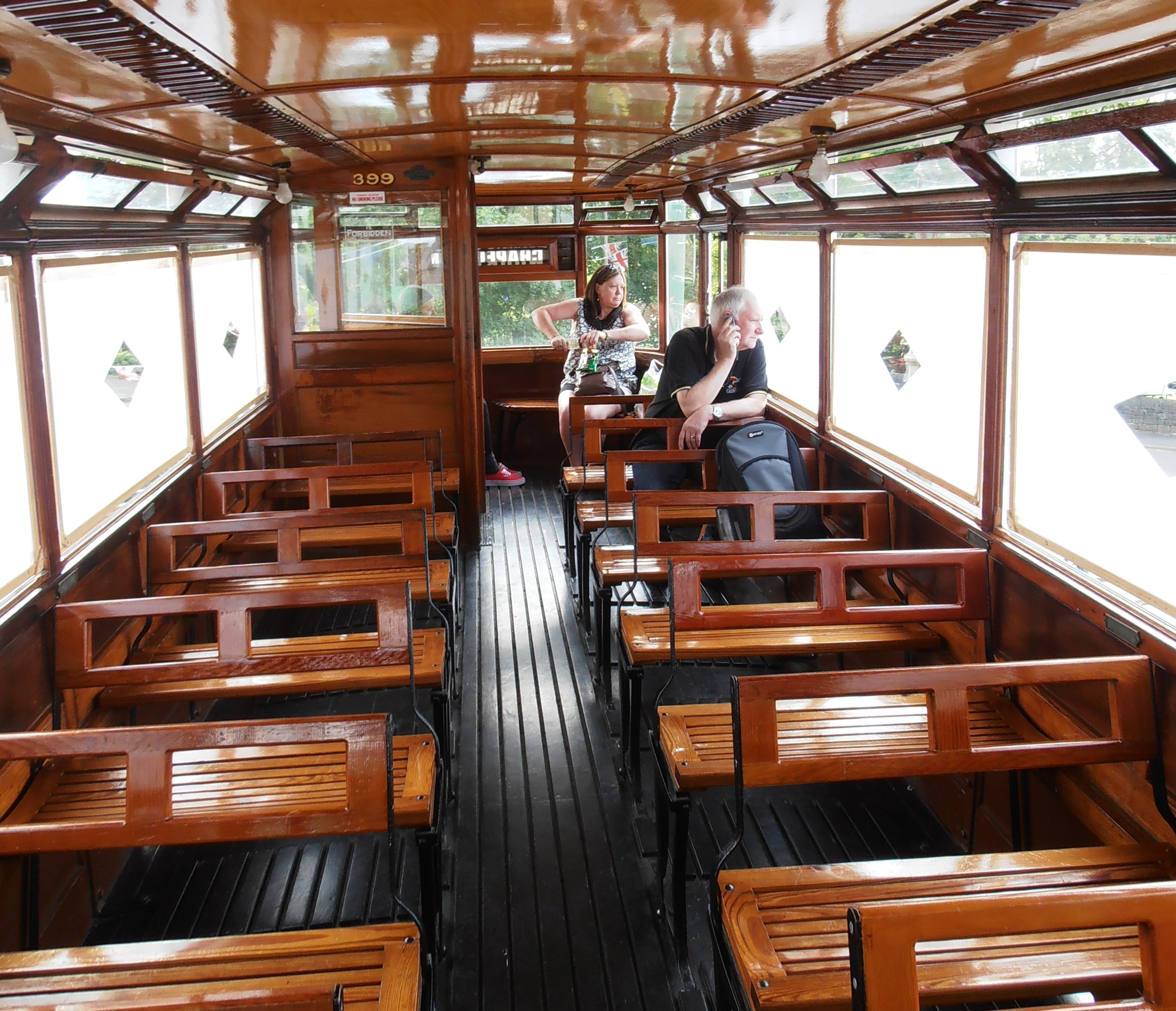 Thanks for your reply Bill i am going back to the late fiftys the mind fogs a bit over time i do recall the name now.I remember what was left of the old bell pits in the woods i would think there still there now if you know what to look for.Correct me if i am wrong but i think Bell Isle got its name from the bell pits in the area.
No matter were i end my days im an Hunslet lad with Hunslet ways.
Top

The history of Leeds (and other) trams after closure in 1959 is considerably more convoluted than you may imagine, and is dealt with in detail in Vol 5 of Jim Soper's masterly history of "Leeds Transport" on pages 1821-33. 10 Leeds trams plus 2 works cars, together with 5 ex-London cars, 2 ex-Hull cars, and 1 ex-Gateshead car, all of which ran in Leeds for considerable periods survived for longer or shorter periods. In addition a Swansea and Mumbles car, a Liverpool tram which later ran in Glasgow, and a Sheffield tram were also for a time present in Leeds during the 1960s. Of these 23 trams, 14 survive. Several of these trams were stored on sites around the Middleton Railway.

The Middleton Railway Trust came into being through the Leed University Union Railway Society, led by the indefatigable Dr. R.F. ("Fred") Youell. Both tramway and railway preservation was planned, but minimal siding space and complete lack of covered accomodation whilst not causing serious damage to stored railway engines and stock allowed those trams which ended up at this site (10, at one time or another I believe), all of which were constructed of light weight and comparatively flimsy metal (and in the case of S&M No 2, wood), to deteriorate rapidly, and be easily vandalised. The trams were kept on a siding alongside the Dartmouth yard exit track, with others in Robinson and Birdsell's bottom field, adjacent to the Parkside RL car park, leaving them vulnerable to the local yobbery. Eventually several of the cars succumbed, although component recovery was undertaken by members of the TMS tramway museum at Crich.

Another difficulty was that the LUURS membership was, by its nature, transient, as Uni courses last three years after which students move on, and in this case were not replaced by other tram enthusiasts, most of who transferred their allegiance to the TMS at Crich where facilities and numbers of workers were better.

A sorry episode, but at least more than half of the vehicles survive, several of them returned to working order in their original glorious condition.
Top

That's great information Jim, thanks very much, I have put a few pics and info on my flickr page about most of the trams stored at Parkside, you can see it here

I am going to have to edit my info now, I love learning things. Thanks again.ps I have all 5 of the Jim Soper books plus others, but have to confess have only skimmed the surface of them, must read them a bit more.
Top

Here I am 30 mins later after reading the section in vol 5 you pointed out. Excellent info including what's left artefacts wise. Didn't know I had leant against the railings from Castleton school when I was last at Crich! They really are a good source of information.
Top

volvojack wrote: .... Once the Tram reached the Terminus the seat back were quickly pushed ready for the next journey. When we were kids in Beeston we would go to Middleton Woods and take the Tram back down to Dewsbury Road ( Junction Pub) and as there was usually no one else coming down we could slam all the back rests upstairs, saving the conductor a job, ...

I would have been too young to do anything like that, but I do remember that if we travelled as a family, my dad always went upstairs to smoke. On occasions when it was really quiet, we would alter a seat back so all four of us could sit facing each other. Simple things, simple minds.

For me, the real memory of Leeds trams is that, apart from the cig smoke upstairs, the atmosphere was much more pleasant than on buses, which in those days always seemed full of fumes. As a child, bus travel was a nightmare for me because I was often sick. Never any problem on a tram.
Top

What a fabulous photgraph Bill. Yes the seats were all wood but not anything as lovely as this. the bar you rested your back on was just a slab of wood and and as for the windows, again on the picture, the upstairs ones were always fogged up by tobacco smoke.
To anyone not familiar with Tram transporrt we had in Leeds don't get the idea that they were anything like the one shown, That would have been absolute luxury.
I also think that most travellers at the time welcomed the advent of buses replacing theTrams, one problem which loomed was the more motor cars coming on the roads which made walking out in a queue to the middle of the road a bit precarious. Also the Bus was warm with comfortable seating and from memory quicker journey at that time.

Sometime ago i took the Grandchildren to the Crich Tram Museum and to be hones, although we had a good day out, i think i enjoyed it more than they did
When thay were not looking i wiped a tear away just looking at some of the Leeds trams, plus the sight of the Blackpool Single decker which was such a thrill to ride on when i was a kid.
Top

Excellent point Jack about the condition of the trams, I think the same rosy tinted nostalgia is also applied to steam locomotives which at their various museums or engine sheds are always immaculate shiny and brassed buffed to within an inch of their lives yet in service always looked terrible especially towards the end of steam, though that point is somewhat understandable.
Top

volvojack wrote: ... one problem which loomed was the more motor cars coming on the roads which made walking out in a queue to the middle of the road a bit precarious. ...

Our usual stop was at the top of Lamb Hill on Armley Road, just before Branch Road. I particularly remember women with pram's used to push them down the offside of the tram, right in the the middle of the road, so they could put them on the platform next to the driver. I remember not really understanding how it was supposed to work and being frightened the tram would set off before a young mum had walked back round the tram to get on.

It's true that the real danger came from the increase in traffic. A few years ago there was one of those columns in a national newspaper re-printing something from years ago and there was an article, originally published in 1925, I think, when the Metropolitan Police Commissioner had announced that he was so concerned about this that he had given an instruction that all reports of drivers passing trams when passengers were queueing from the pavement to a tram must be sent to New Sotland Yard for his personal attention. Times change.

On the subject of rose-tinted memories, I think the comparison to be made is with old buses with open rear platforms etc. We used to go to Hull quite a lot in those days and I really enjoyed the trolley buses: again, no diesel fumes.
Top

Hello tabbycat,
I realise this is a bit off of the Tram subject but my recollection of Steam Trains is anything but Rosy. Apart from being in and sat oposite complete strangers in one compartment the only air was from a narow window and if the train entered a tunnel the smoke swirled into the compartment if one was not quick enough to close it.
Even worse were the Compartments that had no connecting corridor which meant once you were travelling there was no toilets etc.
Still they were Happy Days
Top
Post Reply
21 posts