Where was this photo taken?

How well do you know Leeds?
Post Reply
23 posts

Some tunnel vision will be needed to see the item!

The reinforced concrete and pipework has the look of the basement of a building. I presume the artwork has been professionally done rather than being some sort of graffiti. It also seems to have avoided "embellishments" by less-gifted artists. I did wonder if it was part of the Inner Ring Road refurb but I'm assuming you were on foot with your camera rather than driving. I'm at a loss to think of somewhere that's visible to the public but with limited access in the foundations of a fairly modern structure and that merits this decoration. A bit like "Through the keyhole" but I have no idea beyond that waffle.

Great Picture.
Not living in Leeds for some years i have not been down to the Arches under the Railway Station which years ago was used for parking cars and then converted into shops.
could it be there? When i next visit my home town i will make a point of seeing this wall.

If its tunnel vision is it a bit dark? Close to where the ecclesiastic's garden closure meets the pig herd's one?
living a stones throw from the Leeds MDC border at Lofthousehttp://tykebhoy.wordpress.com/
Top

tilly wrote:Now then TABBYCAT my old mate how are you keeping a bit late but a happy new year to you and your family.


All OK Tilly and all the best to you and yours good buddy.

And in case it gets lost under a sea of new posts, once again my guess.

Hmmm says he with a puzzled frown and ARCHING his eyebrows DARKLY.

It's more or less been solved! Walking away from City Square on the right of Bishopgate Street (where Boar Lane has just met it) the start of the Neville Street road tunnel is quickly met. Almost at once in that there is a tunnel on the right that you used to be able to walk along quite a long way until progressed was barred at where, or very close to where, the River Aire would had started to run underground. I suspect the tunnel was not a public right of way, though on my few visits nobody ever stopped me! A year or so back a blue metal shutter was installed that stopped access after only a few yards in, so there is now only private access for vehicles and people beyond that point. I think there might be access to the Queens Hotel and possibly to the station.

The artwork is on the right just inside the entry to that tunnel (I don't know however if even that small area is private). Though it seems separate from what is general taken to be the Dark Arches I would think it was probably constructed at the same time (I wonder if there is a 'hidden' direct connection to the Dark Arches?).

To my surprise I seem to not have any photos showing the start of the tunnel off Neville Street. I do though have some that I took inside the tunnel on April 3 2012 so I thought I would post 3 of them. The first is a view looking back to Neville Street, the second is a view looking to the far end and the third is a photo taken at that end. The latter has the nice Queens Hotel car park sign (but I wonder if that had been moved to there) and there is a locked access that does not seem wide enough to let cars through (I suspect it may lead to the River Aire).

Sorry for this very long post! I hope it is of interest. 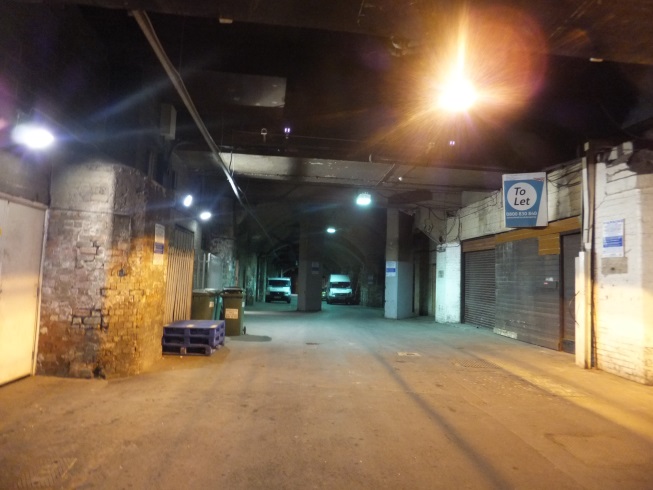 Any information as to why somebody went to a lot of trouble to create a quite detailed mural there? Has it any connection with clocks or clockwork?
Top

jma wrote:Any information as to why somebody went to a lot of trouble to create a quite detailed mural there? Has it any connection with clocks or clockwork?

I would also like to know that, as I mentioned in my post on 13 Jan, 2017 9:32 pm "Perhaps when its location is revealed someone might know if there is any reason".

Knowing that the station is so near I did wonder if it is meant to be a cryptic pun about clock watchers, though that does seem unlikely. I even wondered if the cogs are meant to be train wheels but again that seems unlikely. It's curious!
A rainbow is a ribbon that Nature puts on when she washes her hair.
Top

With some tables, chairs etc it would create the illusion of a bar or cafe, which may have been used ,for example, to film a pop video.
Top

I was about to correct you on Queens Hotel Leodian until I saw your 3rd picture from 2012. Although it doesn't look like the "Car Park" was accessible even then. The goods entrance for the Queens is via a tunnel under New Station Street from the loading area just below the bus stop on Bishopgate Street. Whether the Queens has any direct parking is now debateable although they may contract to spaces in the stations "multi"storey.

I had always assumed the northern of the two west sided tunnels off Neville Street was a goods entrance for the station and businesses on the main concourse. I often curse as my journey to work is delayed by goods vehicles offloading on Neville Street blocking one of the two inbound lanes and parked on double yellows. The affects of this can often be seen as far back as M621 junction 7 in Stourton. I curse substantially less at goods vans reversing into the tunnel entrance at the height of the rushhour. At least thats only a couple of minutes of disruption.
living a stones throw from the Leeds MDC border at Lofthousehttp://tykebhoy.wordpress.com/
Top

I have a reasonable working knowledge of the past uses of the Dark Arches - some of you may remember my contributions to the "Leeds Railway Station's 'Lost World'" thread. The first tunnel on the left down Bishopgate Street/Neville Street was always (and probably still is) Sandford Street, so named prior to construction of Leeds New Station (the majority of the current station). Yes, there is still a direct connection to the Queens Hotel and undercroft from Sandford Street, but this connection is right at the far end on the right, close to the river. The majority of the other apparent "arches" on the right are "blind", and as far as I know have been so since original construction.

The first two (I think) from the entrance to Sandford Street however were functional. One was the entrance to what was in the 1950s/60s a facility used by the Publicity Dept, and where posters for the various railway billboards were stored and distributed from. The other one contained the side/emergency exit from what was then the British Transport Police Club - main entrance more or less opposite the Scarbrough Taps. In the late 1960s that club moved to newly built premises (on stilts!) on New Station Street. The older premises have since been let to retaurants/clubs of various titles, and I am unsure of its present status.

I am sorry I cannot for the life of me recall whhich "way round" these entrances were, it's been a long time!
Top
Post Reply
23 posts