Thanks for your reply Jim, the stream I mention is closer to the old school at the bottom of ridge road than the bridge, it's course runs roughly where the field boundary is in this picture along plot 620? After the hill levels off at the bottom end of the fairway on tee 1. it isn't shown in the picture so either it has been undergoing for a very long time or is wasn't large enough to be mapped, although some small Springs are labelled on the maps and this one is quite fast flowing. I have always been fascinated by watercourses and their routes past and present. This is the same stream from under the golf course flowing into the canal, as you can see it is quite a significant watercourse at this point. 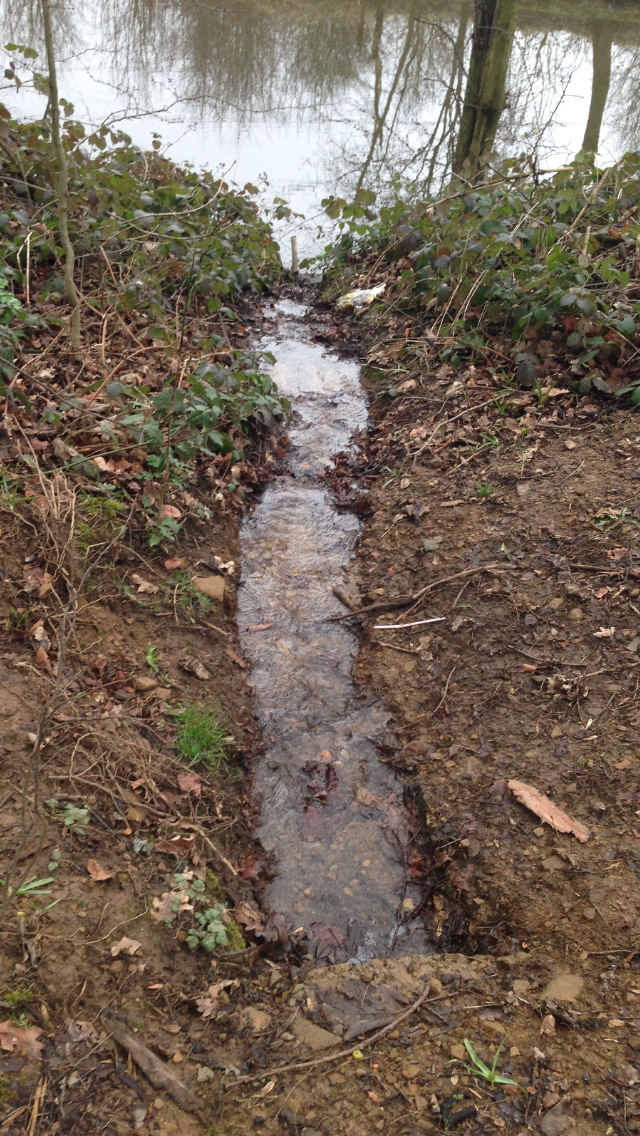 Another image of the stream emerging from under the golf course Emerging from under the golf course
image.png (1.57 MiB) Viewed 7668 times

There's an over flow from the canal to the river via a pipe following Redcote lane. It burst under the railway bridge a few years back and alarmingly eroded a lot of material from the bridge footings. I've always wondered if it goes under the electricity substation or was diverted around.
Top

Cardiarms wrote:There's an over flow from the canal to the river via a pipe following Redcote lane. It burst under the railway bridge a few years back and alarmingly eroded a lot of material from the bridge footings. I've always wondered if it goes under the electricity substation or was diverted around.

Thought the idea of looking as far back as possible on maps may reveal another beck that has been obliterated by roads and houses etc.

Nearest I can get is on Leeds/Bradford road where Broadlea Hill rises up the hill with contours in a series of descending "V" shapes typical of those that accommodate a beck.

Tithe map or more clearer first OS map reveals a small lake as part of the Gardens of Sandford House, albeit a distinct stream is not marked actually feeding the lake.

Below the lake over the Leeds Bradford Road there is a sizeable stream marked flowing down to the canal and possibly on to the river before the Canal was dug.

Field trip/dog walk required, and so it was a climb over the wall job into that broad strip of often wild and derelict forgotten land either side of the canal and river full of overgrown scruffy land often littered with rubbish, various gas electric sewage and water service stations mains and pylons, and plenty of keep out and private signs, with associated fencing and barbed wire.

All nicely ignored by the locals....

Where any stream may have flowed the Leeds Bradford Road forms a formidable barrier. Thick pipeworks appear from the tall stone retaining wall that holds up the road as a kind of dam and pipework appears out of that and then dissapears underground below a sub station.

Intrepid exploration below the sub-station then reveals the prize, and rather deep watercourse appears and carries straight on down to the canal. For all it's depth there was little water in it, if it ever was a stream it is easy to speculate that before the Leeds Bradford road was built many years ago, then it would have flowed with water, the lake seems to confirm that

On the tithe map there are later matching maps in which the "stream" is nicely marked, however it's marked as a "drain" which it sadly probably has to be classed as such today, but all the evidence you can still see in the shape of the land points to the natural lie of the land accommodating a stream wether or not it flowed with water all year round.

At it's outlet a mighty 2 foot main pipe rises out of the ground to cross the canal on concrete plinths and girders, and I wonder what's in that?
Top
Post Reply
105 posts