The Leeds Mod & Soul scene in the 60s

I, as a now silver surfer, found this site by accident but whoa what memories came flooding back. Like you my life revolved around the old Mecca, The Conc and the BG. My memory is not what it was but some of those name rang a bell. Especially Russel who I think lived up Colton/Whitkirk somewhere and as I lived at the top od Halton Hill would stop and give me a lift when my scooter was off the road. From the mecca I remember Mick Sheard and Ric Vaughan and from the BG/Conc the names of Margaret Barber, Margaret Griffin (whose parents ran the Broadway on Dewsbury road) Josie Clarke, Margaret and Carol Coates from Torre Road way, Mick Herring (Kipper for obvious reasons) Ingrid Benn and Calvin Wilkes.
I also seem to recall that the girls were not properly dressed without an obligatory vanity case. A big box of a thing that contained just about everything and still had room for a kitchen sink. I remember Frank and his "fiesty" girlfriend she had a combination of possesive and temper which meant that they spent as much time "broken up" as "together". No doubt they got married had several kids and lived happily ever after, can't see it somehow but...
I remember one bank holiday going to the East Coast camping. 4 of us were working Sat so set of, on 2 scooters, later. I had no idea where we were going so I followed on behind watching his tail light go up and down, turn left then right the left then nothing when I got up to him he was climbing out of a ditch where after a sharp turn, too fast he ended up. No great damage done but by the time we got to the campsite we barely had time to pitch our tent when early in the morning word went round that we had to leave. It appeared that a bunch of rockers had decided to pitch up nearby. I dont know if anything had kicked off or the owners started getting nervous but we were on our way home not long after dawn.
Can anyone remember if the BG closed down because I recollect going to the lunchtime sessions at the Old Mecca but don't know if it closed down or I drifted away?
I also remember the Ionnas at the side of the rail station. I remember a surfing evening with some people dressed in the surfer shirts and again like downstairs at the BG no ventilation and sweat dripping off the walls. I remember Tore who I believe lived up near Roundhay open air pool and the Condras boys The elder I believe worked in Saxone so used to be in regularily.
I suppose thats enough remeniscences for now. Apologies if I used "I remember" too much but they were good times. Glad to hear some of you are still plodding on.
batchoy
Top

Sorry loiner99 but I never went to the Mecca so I cannot help you, but it is fascinating to hear your recollections.

What does anyone know about a 60's club near The Scarborough Taps called Ionnas?
Top

My name is Geoff Procter, grew up York Road. Was a Mod and hung out at Bee Gee club and drank many pints at Whitelocks.
Left UK to Vancouver , Canada 1969.
Great memories of Mecca , Twisted Wheel, hello Georgie Fame.
Who were those guys selling Sunday newspapers outside train station on Sunday morning .
Steam Packet, Long John Baldry had trouble standing on stage . LJB actually passed in Vancouver after long career in voice overs .
Blessed to grow up in great era , George the manic tailor , dancing on stage with Jimmy James and Vagabonds.
Did I really see Jimi Hendrix in Otley Pub ?
Blue bombers and just crazy fun.
Anyone out there that remembers ?
Top

No Haircut, it was Ilkley where Jimi played.

Winter Sundays are usually quite sedate affairs in Ilkley. But on the afternoon of March 12, 1967, the roads to Ilkley Moor were crowded with cars.
The Jimi Hendrix Experience were coming. The former US paratrooper’s three-man band was dropping in to the Gyro Club at the Troutbeck Hotel, before to flying out to Amsterdam the following day.
The band was hired for £150 to do three shows in Mansfield, Leeds and Ilkley before they took off with the release of Hey Joe, which hit the charts in January, 1967. By the time they arrived at the Gyro, their reputation as an exciting live act, with Hendrix pre-eminent as a guitar virtuoso, was established.
Bradford police hadn’t wanted The Beatles to return to the Gaumont in October 1964 – their third visit – citing public order concerns; by then the band was world-famous. They didn’t win that one.
What happened at Ilkley is open to debate. Some people who were there say the police stopped the show almost as soon as Hendrix played the first notes on his Fender Stratocaster. According to other reports, the band played at least one number and were just starting a second – perhaps Howlin’ Wolf’s Killing Floor – when the law intervened, claiming the Gyro was overcrowded.
Club manager Nigel Edwards told one newspaper: “They thought there were too many people in the place. I would say there were between 700 and 800 people present. The police said the limit should have been 250, which seems very small in view of the size of the ballroom.”
Gerry Stickells, the band’s road manager, commented at the time: “Jimi and the boys were very disappointed that the show had to end so suddenly.”
Refunding the audience proved to be tricky, and some minor damage to the hotel – a broken door, pictures torn off walls, smashed drinking glasses – was reported, although some people say this was exaggerated by newspapers who would later caricature Hendrix as ‘the wild man of rock’.
Amplifiers, guitars and drums back in the van, the band drove down the hill to the Crescent Hotel for an overnight stay.
A couple of years ago, the hotel’s manager, Steve McGriskin, a Hendrix fan, named a new beer from the Moorhouse’s brewery ‘Jimi’s ale’. It’s still a favourite.
There is a photograph in the bar of Hendrix supping a pint.
In November 2008, the Hendrix tribute band Are You Experienced? took part in the hotel’s first rock festival weekend.
Had Jimi Hendrix lived, he would now be approaching his 67th birthday. The Troutbeck Hotel, in Crossbeck Road, is now a residential care home for the elderly.
The 40th anniversary of Jimi Hendrix’s death in 1970, is to be marked on Monday with the release of Valleys Of Neptune, an album of previously-unreleased material.
Is this the end of the story ...or the beginning of a legend?
Top

Great times, remember it all very well.
Used to Hank out at Whitelocks Pub, standing in alley freezing my nuts off drinking pints at 16 years old. And who cannot forget Brandy and Baby Chamge
Top

Lucky enough to own a scooter, so also able to get about a bit in the 60s. My memory is not what it was but your name does ring a bell. Do you remember any of your mates from that time. I used to move between the BG, The Conc and the Old Mecca. Sunday in Leeds is now like any other day but I remember many a Sunday being bored at home, driving into "town" and it being dead. On hot days sometimes went to Roundhay and the open air pool (sadly no longer there) My name is Bernard Nicholson like you a silver surfer but so lucky to have grown up the best of times. In my 60s now but still have inkling to try a scooter again ??
batchoy
Top

Re: The other Steve

Michael_G wrote:uPod wrote: ...Hi MikeThis uPod aka Phil Sharp. I guess I should have put that in the text.I am presently in France with my wife in Bordeaux...Best wishes Oh wow. But I'm confused (a frequent state of play for me)

The post said.. "Some names I remember, Mick Gallagher, whose father was i believe chief constable of Leeds (!), Paul and Peter Condras, Tora Gill, Steve Hodgkinson, me, Phil Sharp, Russell Wagstaff, Loraine from Harrogate, Pat Johnson Frank Richardson and his fiesty girlfriend"So I read it as there was Steve (did he work at Scottish Widows?), you, Phil Sharp, Russell etc etc.So the you was someone else. But you're Phil Sharp? The name I remember, but faces I'm not brilliant at. Did I look at all familiar? A few more years, and some of this stuff is 50 years ago!! Unbelievable. What's really coincidental is we're just back from the Dordogne and have just booked a little cottage nr St Emilion for next year! This is Helen and DD at a nice little Bordeaux eaterie on the Place Saint-Projet.

Hi Phil,just found this site and can't believe I can travel back in time.I am the other Steve,Steve Hodgson aka Snoddy,I was given this nick name due to the confusion between myself and Steve Hogkinson. I had a red and white Lambretta SX200 and remember all the names you quoted.Attached are a couple of photos you took in 1968 outside your Mums house in Scholes (just to jog your memory).I married Pat Bell in 1972 and we lived in Wetherby until we moved to Devon in the 80s where we still live.Just in case you can't remember that's Russel Wagstaff in the photos with me and the Scholes crowd. 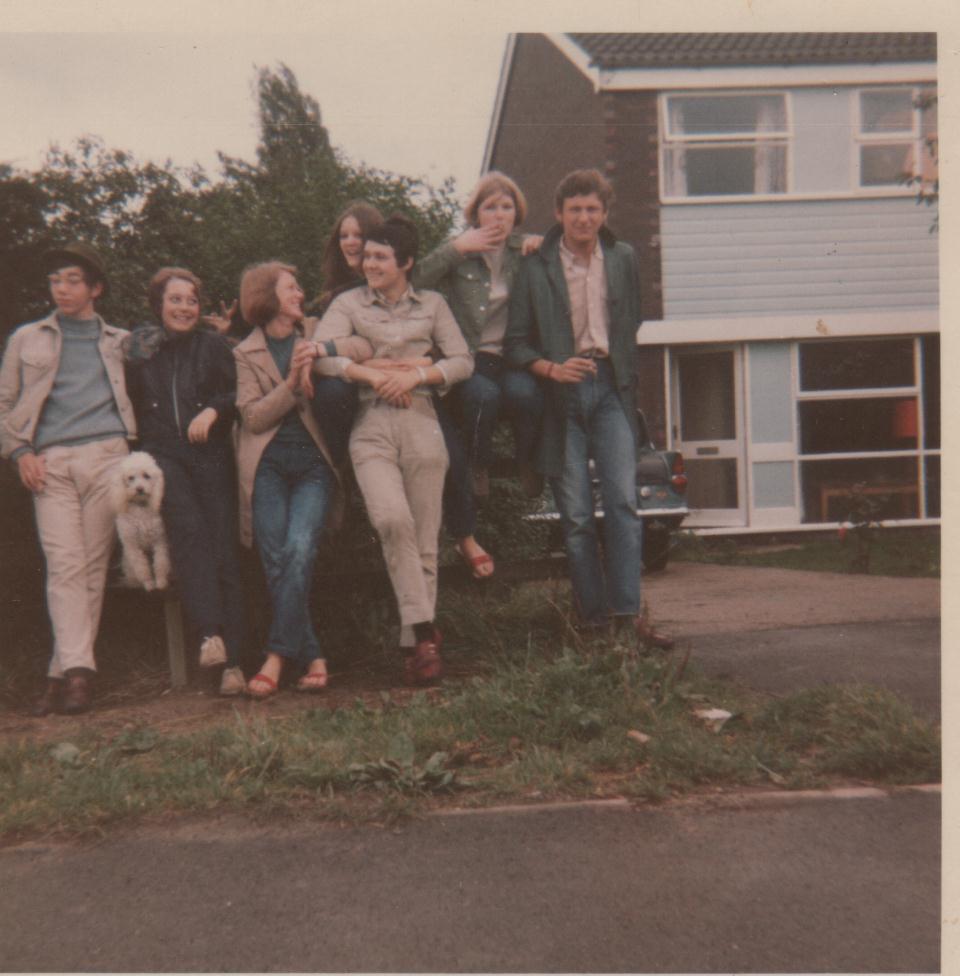 Sorry to all you on the Forum for my previous very first nostalgic outburst-but what a find this site is.
I will now post a proper recollection of my 'Mod ' period living in Leeds (short version)
In my first foray into Leeds in late 64 I found the 'Central' - OK but not really what I expected of a 'blues' club.Someone told me that all the 'Mods' hung out in a coffee bar called 'La Concadora',sounded interesting so after purchasing a Parka from the ex Army shop down the narrow arcade next to Woollies,tracing around the soles of my desert boots and painting two white footprints on the back-bought a second hand Lambretta Li 150 Series II and joined in!It wasn't long before I was introduced to The BG, Ioannas (does anyone know how it was spelt?)the Majestic and a place up Rhounday,I think it was Street lane on the corner of a junction.The BG was the place I met the crowd in u Pods post.In 66 I upgraded to a new Lambretta SX200 (FUG11D) in red and white as I was now working at the YEB in Whitehall Road.I enjoyed our Sat meets and saw too many acts to post them all,but one rarely mentioned was Victor Brox who fought his way through the crowd playing 'Night Train'.These were some of the best days of my life and it was u Pod who introduced me to my wife so a belated thanks Phil and yes I still have a scoot,a Lambretta Li Silver Special - quite appropriate.
Top

Snoddy wrote:Sorry to all you on the Forum for my previous very first nostalgic outburst-but what a find this site is.

I for one don't think any apology is necessary. What makes this site what it is is the facts, the detective work and especially peoples own memories which usually lead to more of the first two.
living a stones throw from the Leeds MDC border at Lofthousehttp://tykebhoy.wordpress.com/
Top
Post Reply
76 posts