Your favourite days out round Leeds
Post Reply
168 posts

We've not heard anything from Jon on here since he revealed his plan to sneak into the woods near Harewood House with his hammock and his strike-anywhere matches. Does anybody know if Harewood House has any dungeons?
The older I get, the better I was.
Top

Well it seems I was psychic as my prediction of Motorsport being promoted because of TdF success has come true.Sadly a route has been formulated (pun) in my head. And just imagine the smooth state of the roads.The 37 and 3/4 miles to emulate the TT may take a bit longer!
Top

I saw that and thought the same!

First of the legacy events?On Barwick Road, Stanks Drive and Sherburn Road in East Leeds, orange "British Cycling" signs with arrows on have appeared on lamp posts - setting out a course of some sort.Presumably this means there is some sort of event / race, but I don't recall hearing anything and there is nowt listed under "events" for this weekend on the British Cycling website.Tour de Swarcliffe anyone?
Speaking the Truth in times of universal deceit is a revolutionary act – George Orwell
Top

Bruno wrote: We've not heard anything from Jon on here since he revealed his plan to sneak into the woods near Harewood House with his hammock and his strike-anywhere matches. Does anybody know if Harewood House has any dungeons? Im sure the original Harewood Castle would have some degree of holding facility but as HArewood house is an 18th century stately home then it wont. The last thing the landed gentry would have wanted is prisoners in their splendid pile of bricks.
Don't get me started!!My Flickr photos-http://www.flickr.com/photos/cnosni/Secret Leeds [email protected]
Top

Leodian wrote: Thanks Richard. I had only seen the Yellow Jersey being put on at the presentation after Stage 1, so I assumed that was the way it was always worn even during the race. PLUS;it means that the sponsors logo can be ironed (as a transfer), rather than having to carry yellow jerseys for every teamAnd, the full-length zip doesn't pass through the jersey on podium photographs/TV
Top

raveydavey wrote: First of the legacy events?On Barwick Road, Stanks Drive and Sherburn Road in East Leeds, orange "British Cycling" signs with arrows on have appeared on lamp posts - setting out a course of some sort.Presumably this means there is some sort of event / race, but I don't recall hearing anything and there is nowt listed under "events" for this weekend on the British Cycling website.Tour de Swarcliffe anyone? While out and about today, I noticed the route goes up Hebden Approach to Coal Road where the signs direct it across the Ring Road using the dropped kerbs of the fire lane (seems a bit dangerous...) straight onto Ramshead Approach before taking right onto Ramshead Drive.Anyone know more about it?
Speaking the Truth in times of universal deceit is a revolutionary act – George Orwell
Top

Welcome To Yorkshire's official TdF Grand Depart film:http://vimeo.com/100301225Well worth 3m14s of your time. Has Yorkshire ever looked more glorious to the watching world?
Speaking the Truth in times of universal deceit is a revolutionary act – George Orwell
Top

Great video. Thanks for the link raveydavey.
A rainbow is a ribbon that Nature puts on when she washes her hair.
Top

Bruno wrote: We've not heard anything from Jon on here since he revealed his plan to sneak into the woods near Harewood House with his hammock and his strike-anywhere matches. Does anybody know if Harewood House has any dungeons? Heh heh! Thats made me laugh Bruno! Myself and my friend and neighbour Dave made it to the Harewood estate for the 'Dare 2 Be Bike Festival' and Tour De France 'official' start. We cycled the 8 miles there from West Park via Adel / Eccup then got onto the Harewood House estate along the usual bridleways. We didnt encounter any security and if we'd wanted to could have camped on the official campsites that you were supposed to pay £30+ per night per person for or something ridiculous. We preferred to camp 'wild-style' as we wanted to feel more like being in the outdoors rather than in a field of tents and screaming kids. We found a nice patch of conifer forest not far from the lake just below Harewood House. I set up my tarp and hammock and my mate set up his dome tent and we got a nice blaze going (see photo). It was dreadful for biting insects, I'd never been bitten by insects and had a reaction before, by the next day I was covered in itchy bumps. We could feel the midges biting us apart from when we were at our campsite with the fire going. I had to keep putting damp wood and moss on the fire to create smoke to keep them away. Had a look around the bike festival on the Friday afternoon, sadly it was something of a wash out cos after weeks of non-stop sunshine sods law the weather decided to rain continously...Anyway it got really dark where we were as there were no lights anywhere apart from a bit of a moon. By midnight it was totally black (real country dark!) apart from our fire. We could hear all kinds of weird noises as they have some non-native birdlife around the Harewood estate. I slept like a baby in my hammock until at around 2am the ropes I'd tied around the tree to fix the hammock to came undone and I slumped to the floor! Luckily it was soft pine needles which cushioned my fall. It was quite funny at the time but I managed to get it fixed in no time and got back to sleep. Also at one point in the night I had to answer the call of nature, and as I was stood doing the business I thought I could smell burning rubber. In my half-awakedness I'd put my trainers on and walked right through the smouldering embers of our camp fire and there were glowing coals stuck to the soles of my now melting trainers causing the acrid stink - good job I didnt go barefoot- ouch! I briefly woke again at around 4am just as it was getting light as I heard a loud noise, through my bleary eyes I could see about 20 foot away a roe deer stood frozen staring at me lying in my hammock/ sleeping bag, as I lifted my head up it took fright and went crashing off through the undergrowth. All night long there were squirrels, shrews and all sorts of things scurrying around the forest canopy and along the ground.The next day everything was damp and cold. We went up to the bike festival, had another look around and had a cuppa and some breakfast. Watched the start of the Tour De France at lunchtime but then decided to come home as my bike had dragged a lot of twigs and muck through the rear derailleur (gear mechanism for those that dont know) and it was just about possible to push or freewheel it, no amount of tinkering would fix it. I'm glad I went to Harewood for the Tour De France event as it was a good laugh and I was well pleased with how comfy sleeping in my hammock was in the open air. I certainly wont ever been sleeping on those awful roll mats again in a poky tent. Tarps and Hammocks are definetely where its at for sleeping outdoors / camping. It says it all that the weekend after the TDF I went on this Bushcraft weekend and everyone else was awake at 8am complaining about having had an uncomfortable nights sleep, I didnt wake up until after 10am after another cosy night in my hammock! 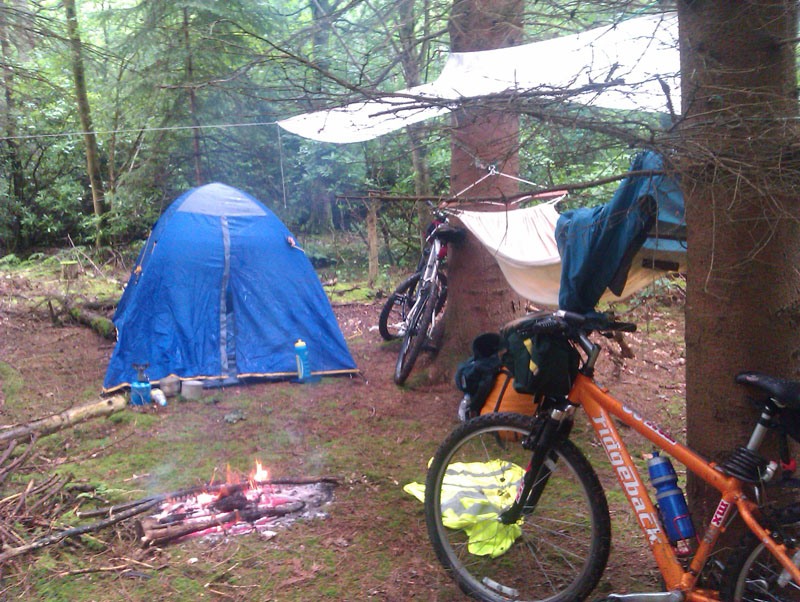 And no matter how things end, you should always keep in touch with your friends - Dave Gedge
Top
Post Reply
168 posts