Does anybody have any info on (and in particular) any pictures ofReynolds & Branson (R&B) which was located on Lower Briggate ?(R & B were Chemists, photography & engineering)I have looked on Leodis but can only find one picture. thanks
http://www.flickr.com/photos/slw74/
Top

what did you search on. You might see a few more searching on something nearby e.g. Watson Cairns or the Viaduct/dysons dependent on which side. Apologies if you had already tried that
living a stones throw from the Leeds MDC border at Lofthousehttp://tykebhoy.wordpress.com/
Top

Thanks Tykeboy, just looked under Lower Briggate. I will try your suggestion
http://www.flickr.com/photos/slw74/
Top

"Leeds as it was in photographs" by Brian and Dorothy Payne has a picture of the Reynolds and Branson premises at no. 14 Commercial Street.The caption gives this info: Reynolds and Branson, No.14 Commercial Street, these well known Leeds chemists were established in 1816 at No. 13 Briggate by William West F.R.S This handsome shop, was designed for them by the architect George Corson in 1868. The arches were supported by three red granite shafts, an original feature being the capitals which had medicinal herbs, such as foxgloves, dandelions and henbain etc. carved on them. These have now disappeared but the Victorian building still survives above the ground floor."I can scan the photo in if it would be of any help, though obviously not the Lower Briggate premises!
Top

Thanks Rikj. That info is the sort of thing I am looking for. I would be grateful if you would be able to scan the picture.Thanks again
http://www.flickr.com/photos/slw74/
Top

Plink! P.S. Think I should add that the book says the photo is reproduced from the collection of Stuart and Anita Fell.The original is of a lot higher quality but I suspect the book is now out of print. Follow the link in the sig and mail me on flickr if you want the large version! 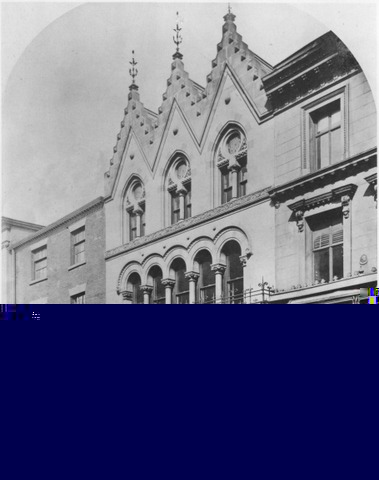 Not exactly "Old Leeds firms" my dad worked for estate agents all his working life. When he sarted work, before WW2, he worked for a firm called Thaker & Maud which was then bought out by Paxtons.After he had retired, I bought him a birthday present of a Kelly's Directory, 1914 edition. It cost me a fiver. Basicly, it's a telephone directory but without phone numbers. It lists every steet in Leeds, who lived there, and what they did for a living [plus it had a "commercial" directory that listed all the businesses plus their adverts.Apparently, when my dad started work for Thaker & Maud, in about 1936 [as a rent collector] this was the very same edition that was in use in the office.He spent about three week reading this thing, much to Mam's disgust."I remember this bugger, never had the rent but always had an excuse!""They were mucky buggers...."It brought him so much happiness, it was worth every penny of £5. I have the book still. Sadly, Dad has gone.
http://www.flickr.com/photos/liits/
Top

my step dad worked at henry berrys,i worked for w h miers the tanners,my grandad at fowlers/hunslet engine works and my dads list is never ending...but all at the old wholesale market..watch this space....
i do believe,induced by potent circumstances,that thou art' mine enemy?
Top
Post Reply
381 posts