During a stroll yesterday (December 25 2017) shortly after passing the Babbling Baby Spring in Adel Wood but just before the old toilet block I heard a loud sound of running water. I knew there is an large underground sewage/flood alleviation system nearby that was built some years back and from which water can be heard but this water I heard was not where that system is. I found the sound was coming from an exposed drain/sewer as its heavy-looking metal cover was upright, exposing the structure beneath. Though the raised cover was not large the mainly brick-lined structure below was much wider and quite deep. An extremely strong flow of water was coming out of a circular channel into the structure but I could not see where the water flowed away to. Hand grips were visible that would certainly be needed if someone had to enter the structure (a tall person would easily fit in and still be below the surface). I suspect that the cover had been deliberately raised but I did not try to put it back in case I made things worse and also being unsure of what contamination risk there might be.

The water flow was much higher than that in the quite active close by Nanny Beck. It was a surprise to me that there was a drain/sewer system there and that it had such a strong flow (there was a smell but not particularly foul). I could not readily find where the water flowed to but if it does carry effluent it would surely not be into the nearby Adel Beck. It may though be that there is a sharp change in direction and that it does run into the alleviation scheme. I knew that in an 1847 map a branch conduit of the Leeds Water Works ran (or still runs) nearby but the drain does not seem to be on the line of that, though I could be wrong. The famous Blackmoor Tunnel that carried water to and across the Seven Arches is away from the branch conduit course. I have added 3 photos that I took and (being still limited I think to 3 per post) I have added a copy of part of the 1847 map showing the branch conduit in my next post. I hope this probably much too long thread is still of interest. 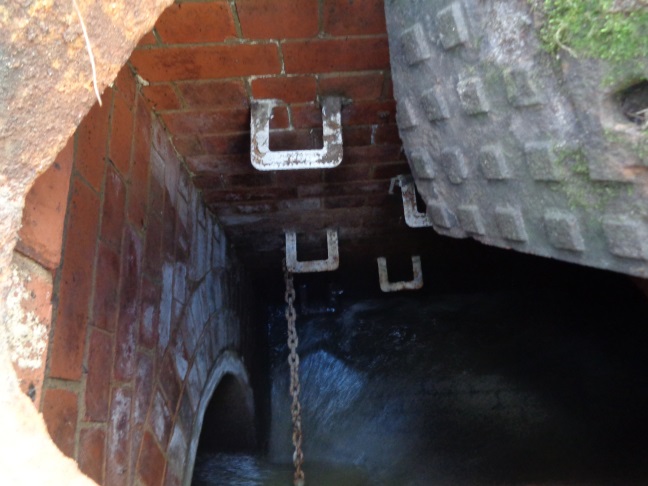 Re: A currently exposed very active drain/sewer in Adel Wood.

This is the copy of part of the 1847 map that shows the course of the branch conduit of the Leeds Water Works. As I note in my post above the drain/sewer does not seem to be on the line of that course, though if not it will be very near. A rainbow is a ribbon that Nature puts on when she washes her hair.
Top
Post Reply
2 posts • Page 1 of 1