How well do you know Leeds?
Post Reply
24 posts

Sorry Jim,
It was intended as a cryptic clue
to the where is this poser from Bill
Consciousness: That annoying time between naps.90% of being smart is knowing what you're dumb at.
Top

Just come across this pic, I haven't a clue where it is. Can anybody help put me out of my misery? 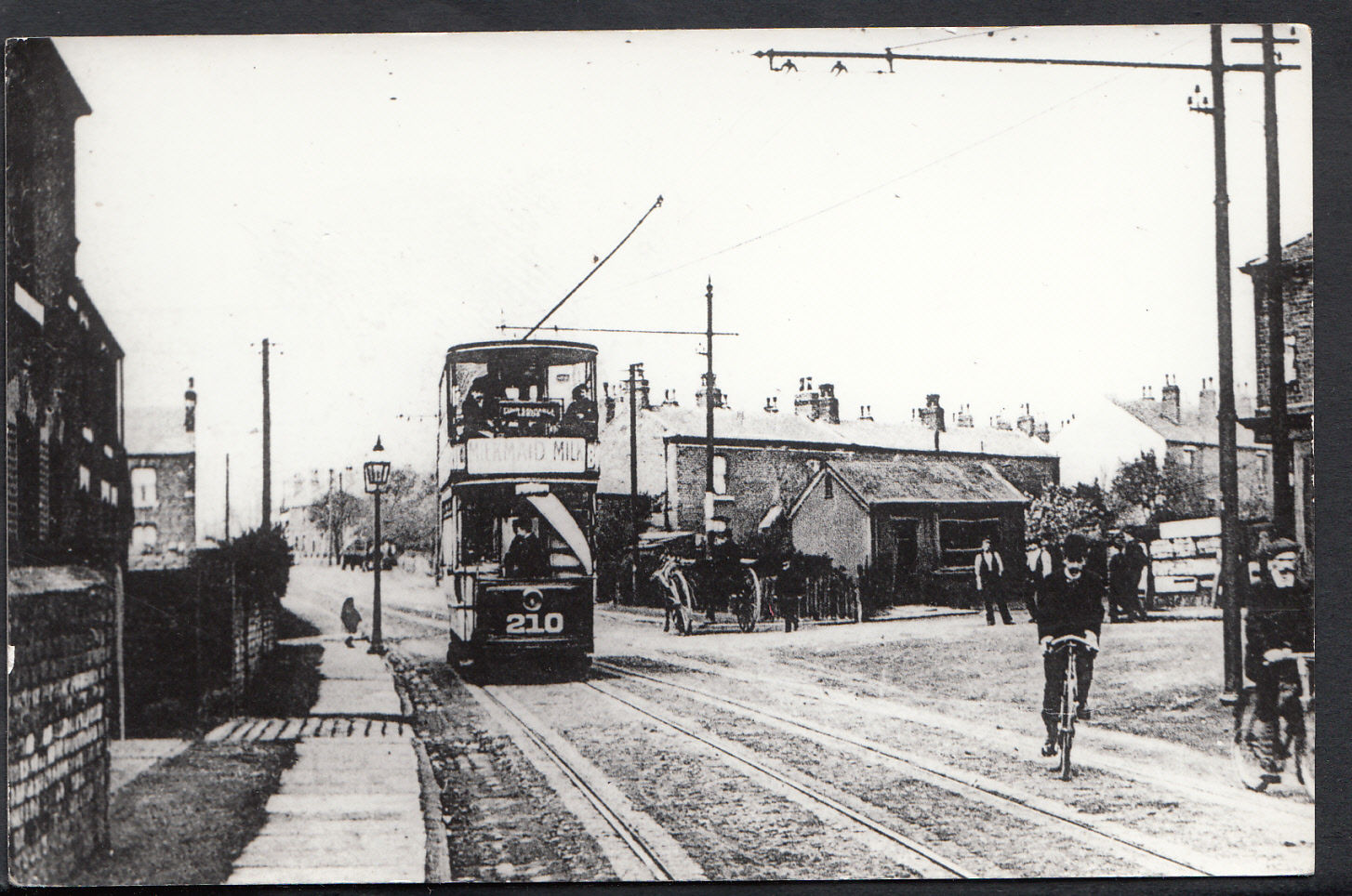 Not an expert and it may have evolved to it but Wikipedia suggests that Leeds trams used bow collectors rather than poles, negating the need to turn around. So the first question is it even Leeds?

If it is there aren't any obvious landmarks. Were trams assigned to a regular route? If so which? It has a feel of Town Street, Beeston but there is no science behind that. I'd also guess it is 1900s or 1910s at a push.
living a stones throw from the Leeds MDC border at Lofthousehttp://tykebhoy.wordpress.com/
Top

The open front and driver position and style of number would indicate a date between around 1905 and 1925. Leeds trams used poles for many years, but changed over to bow collectors in around 1938. As to site, I don't recognise it, but the tracks appear to be converging, which would indicate either a terminus or a loop on a single track section. The interesting feature is the destination indicator. I can't read it, but there were only a small number of indicator destinations set out in this particular fashion - around ten - and this one doesn't seem to match up with any of them!
Last edited by jim on Sun 10 Jun, 2018 3:18 pm, edited 2 times in total.
Top

I think its an early 20th C Leeds tram very similar to this one
http://www.leodis.net/display.aspx?reso ... SPLAY=FULL
Without being able to read the destination board/ route number its very difficult to narrow down the location.
It used to be said that the statue of the Black Prince had been placed in City Square , near the station, pointing South to tell all the southerners who've just got off the train to b****r off back down south!
Top

Could this have been a Bradford Tram heading for Leeds as not only quite a few of their Trams of that time had Numbers on the Front in the numbers 200 range. Also looking on the picures and comments on Leodis there are mentions on Bradford Road. Old Road junction. where the Tracks are running along to Stanningly
Top

I think the destination blind reads "Corn Exchange Leeds".
The lie of the land reminds me of Wood Lane,Rothwell,near the Haigh Road junction.
Top

Two excellent suggestions unslet. That site did have single track working with loops, and though not shown in the blind destination diagram would have been used on short workings (ie, those not on cross-city routes)
Top

"unslet" is bang on. After matching up with old maps and google street view this is definely the Wood Lane, Haig Road, Spibey Lane junction looking west towards the jaw bones. A lot of the property on the pic still exists.

Thanks to all for replying, at last I can stop racking my brain.
Top

Sorry Bill but I might be setting you racking your brains again because I am not entirely convinced. The 1931 image on Leodis at http://www.leodis.net/display.aspx?reso ... SPLAY=FULL shows a previous Baptist looking as though it is older than 30+ years and I am assuming that is looking down Haigh Road where the bowler hatted cyclist is emerging from if I am reading your positioning of the image you supplied correctly. Or are you saying he is turning out of Spibey Lane and Haigh Road is off the right hand side?

I don’t think there is enough evidence to suggest anything on the left hand side of the road in the Tram image is/could still be there because the end on house certainly isn’t. If the cyclist is emerging from Haigh Road, and the angle would suggest this, that definitely is not the Baptist church of the 1931 image the pair of cylcists’ left (right as we look). Agreed the first row of houses behind is consistent with being either side of Spibey Lane albeit with alterations/demolitions/rebuilds to at least the first house of Wood Lane. And the chimneys of the houses behind is consistent in both images
https://goo.gl/maps/3nNKNBsev1B2
living a stones throw from the Leeds MDC border at Lofthousehttp://tykebhoy.wordpress.com/
Top
Post Reply
24 posts