Eels and other 'River Monsters' of Leeds

The green spaces and places of Leeds
Post Reply
18 posts

I've never seen any myself but I read something on an angling forum regarding eels apparently living at the bottom of Clayton Ponds just off the ring road at West Park. I was under the impression that eels swam between freshwater habitats and the sea in order to breed, sometimes leaving the water and crossing wet fields enroute. It makes me wonder how these eels would manage such a feat. I believe the person on the angling forum described them as 'specimen eels' some of which are thicker than a mans arm and they can damage fishing tackle, does that mean they are trapped in the ponds or something? There is a beck several hundred yards away so its not inconceivable I guess, does anyone know if there are eels in the river Aire or Leeds Liverpool canal that come via the North Sea / Humber?I've never been into fishing myself, apart from netting sticklebacks in mill dams as a nipper. I can remember swimming in the rivers Wharfe and Aire where the water was too murky to know what lay beneath the surface and of course we'd scare ourselves with tales of killer pike and bloodsucking lampreys. A particularly chilling story was posted on the river Wharfe's banks at Kearby Sands which apparently was quite a spot for sunbathing and swimming from the 1930's onwards when they imported thousands of tons of sand from Bridlington to this location not far from Harewood Bridge. A caravan site and pub sprang up to cater for the visitors to this landlocked 'beach'. Anyway one sunny summers afternoon in 1965 two twin boys from Leeds vanished yards from their parents on this beach and they were tragically discovered by police frogmen under a sand bank apparenly dragged under by a whirlpools currents. However this didnt deter myself and my pals. I was always more worried about 'Jaws' or Pirahna's that had been mutated by Sellafield nuclear waste.
Have your fun when you're alive - you won't get nothing when you die... have a good time all the time! - Chumbawumba!

I have a photo of the sign they ere4cted. Two boys went missing one busy afternoon. That area of the river Wharfe was incredibly popular at the time, there were no foriegn hols back then, so familys went to the river, or golden acre for a day trip. the pub was, i beleive, called the Clap gate.As for eels. They got into clayton ponds by the hand of man. i myself let a good few go and they are in there up to 6lb. Which is a big eel. However, these are land locked and, despite what you read, they will stay in there until they die. The eels in there will be over 30 years old, i have caught a great many of them,.
Come on Leeds United!
Top

Talking of fish (including eels) this thread titled 'Angling in Leeds' may be of interest:- http://www.secretleeds.com/forum/Messag ... dID=1910In a post of mine in that thread on page 1 16 Apr 2012 19:59:30 I mention a very large eel that was claimed to have been caught on September 26 1868 in the River Aire near Accomodation Road (admittedly a river not a pond in a wood) to which there are interesting replies.
A rainbow is a ribbon that Nature puts on when she washes her hair.
Top

Fascinating to hear of eels in the river Aire, I've only ever seen them in jelly or on telly. Sorry to go off topic and onto cryptozoology but does anyone remember years ago stories of a 'Big Bird' seen above Bradford? Might have been in the 1980s.
Have your fun when you're alive - you won't get nothing when you die... have a good time all the time! - Chumbawumba!

JonYou mean that fat lass with tattoos who lived up by Bolton Woods Quarry?River MonstersIf you walk over the lock gates by Royal Armouries there's a 3 to 4 foot pike.
Top

just out of curiosity jon, is kearby sands near the wooden bridge in ox close woods? sounds like an interesting yet dangerous place to go
if it feels good ......... dig it!
Top

whitecoatboy wrote: just out of curiosity jon, is kearby sands near the wooden bridge in ox close woods? sounds like an interesting yet dangerous place to go The kearby sands are on the opposite side of the river Wharfe and about 2 miles further upstream.
Come on Leeds United!
Top

Talking of Ox Close Wood (near East Keswick) the old footbridge over the River Wharfe was still closed when I was walking in the area on Wednesday (Feb 19 2014). It was closed during 2013 as it was considered to be in danger of collapse and is now in the process of being assessed for among things such as costs and who should pay. I took the photo of the foot bridge on Wednesday. 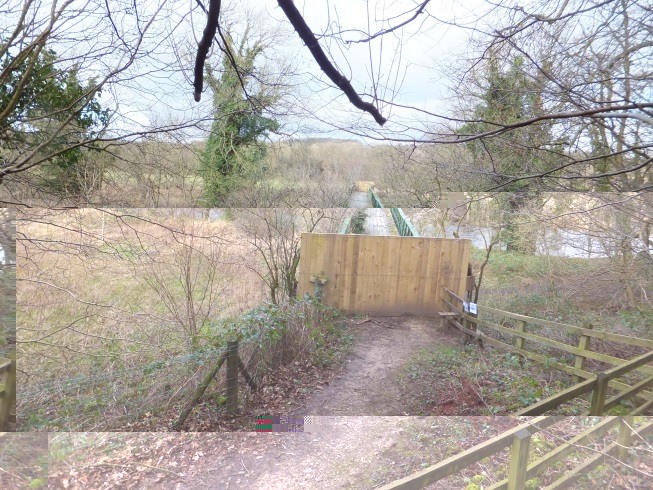 whitecoatboy wrote: just out of curiosity jon, is kearby sands near the wooden bridge in ox close woods? sounds like an interesting yet dangerous place to go I just found this interesting article on the Ripon Gazette's website from 2008:Solved: mystery of deadly sands01 February 2008THE mystery of Kearby Sands has been solved, writes Pannal correspondent Anne Smith.The sign, pictured right, was put there in 1963 to warn of the hazards of Kearby Sands, near Harewood Bridge. Follow the public footpath on the left before the bridge, going towards Leeds, and take this path alongside the River Wharfe for just over a mile cross at a wooden bridge and you are at Kearby Sands.The sands brought from Bridlington in the 1930s are still there.It is quiet and peaceful now but in its heyday it was packed with 500 or more people.Jackie Sedgewick from Harrogate was there on that fateful day and she rang to tell me about it and asked if I knew who the twins were.After much research yes I do. The twins were Andrew and Stewart Nicholson and they lived at Tilbury Terrace, Leeds as did their grandfather Arthur Chapman of Willoughby Mount. The twins were taken there by their parents who then sunbathed near the river.The children played and returned to them periodically.The children went back to the water and when Mr and Mrs Nicholson went to see them playing they could not be found.Police frogmen from Leeds found the boys in 25ft of water.The area they were drowned at is called Netherby Deeps which has a whirlpool and a sudden drop not far from the edge of about 30ft.Warning signs had been put up but they had been vandalised and thrown away.The tragedy happened on June 9, 1963 a beautiful warm sunny day.A misadventure verdict was recorded and the coroner said the tragedy of the twins rests on vandals.A volunteer lifeguard Michael Willingale of Wortley, Leeds an experienced frogman and a former member of Leeds Underwater Swimming Club volunteered to be on Sunday duty all through the summer.Sunday was the day of the tragedy and also Sunday afternoons saw eight more children rescued.It is so quiet now just grass banks hard to imagine it was full of wooden chalets and caravans and hundreds of people. I think the last of the caravans went as recently as 2003.By all means visit Kearby Sands, but do not swim there.------------------------------------------------------------------------------------------------------------Quite chilling eh? Every summer when we get a few hot days the local TV news is full of tragic stories of people drowning from swimming outdoors with warnings not to be tempted to enter rivers and lakes. This seems to be at odds with the current trend for 'Wild Swimming'. Its hard to understand what to do. Personally I'll make my own mind up, but I think if I was in charge of youngsters I'd be very hesitant to take them swimming outdoors - especially at somewhere like Kearby Sands - although the sands are very overgrown and inaccessible now.
Have your fun when you're alive - you won't get nothing when you die... have a good time all the time! - Chumbawumba!

The drowning of the two boys was a tragedy and I have it in the back of my mind that there was a row regarding a picture of the boys being carried away from the scene, uncovered. The picture was on the front page of the local Press and I believe the reason given for printing it was to act as a deterrent. I think I'm correct in what I write but it was a long time ago.
Daft I call it - What's for tea Ma?
Top
Post Reply
18 posts