As well as the Triumphal Arch at Parlington, Leeds has another little known royal monument, pictured here I hope.In 1858 Queen Victoria was to visit Leeds for the inauguration of the Town Hall. To give a measure of the scale of the visit she was due to attend a gathering of 32000 (yes, thirty two thousand) sunday school children on Woodhouse Moor. Although it isn't entirely clear, the story of the arch seems to be thus.William Beckett, banker, lived at Kirkstall Grange, now part of the Becketts Park Campus. He seemed to have hopes that the queen might stay there or at least visit the estate. He commissioned a path leading to the arch, which overlooked Kirkstall Hill. As it turned out the queen stayed on Woodsley Road and it isn't recorded whether she visited the arch. However, one legacy is that the wood is now known as Queenswood, and of course we have Queenswood Drive as well.The coloured tiles on the arch are in very good condition and still read quite clearly:"To commemorate the visit of Queen Victoria for the inauguration of the Town Hall at Leeds. 7 September 1858".I've a clearer picture of the tiles if anyone wants to see it. Most of the above info is taken from "Far Headingley Weetwood and West Park" by David Hall ISBN 0 9539312 0 X 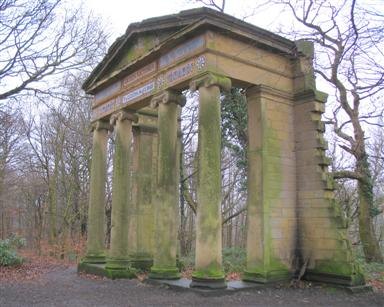 We Town Hall people would love to see your clearer picture, rikj. I didn't know about this arch at all!
'Are we surprised that men perish, when monuments themselves decay? For death comes even to stones and the names they bear.' - Ausonius.
Top

Thread resurrected for Parksider with instructions on how to reach this monument.If you go to the Beckett Park campus of Leeds Metropolitan University, entering from St Chad's Drive off Otley Road, keep walking straight along the same path once you're inside the campus (i.e. don't turn towards the "horseshoe" of buildings). Once you've passed the final building you'll enter Queen's Wood and in a few minutes you'll reach the archway.
Top

Geo shots with map+ grid ref and close up of tiling.Click on map to 'go right in'http://www.geograph.org.uk/search.php?i=28679576    Why the Queenswoods are so called.
Top

I was under the impression that this was relocated to here from outside the town hall or something, or am I getting confused with the statue of Queen Victoria that now sits at the entrance to Woodhouse Moor?
Have your fun when you're alive - you won't get nothing when you die... have a good time all the time! - Chumbawumba!

both, I think the arch was moved and Queen Vic def was.
Top

Tasa wrote: Thread resurrected for Parksider with instructions on how to reach this monument. Thank you very kind and thoughtful of you....
Top

You're welcome, Parksider!I also found the location of St Aiden's Mine and added the details to the thread where you originally posed the question, just in case you checked there again:http://www.secretleeds.co.uk/forum/Mess ... eadID=3678
Top

I know that Her Majesty is visiting Leeds this summer as part of the Diamond Jubilee celebrations.Has anyone heard of any plans to erect a lasting memorial to this landmark event?
Top

jdbythesea wrote: I know that Her Majesty is visiting Leeds this summer as part of the Diamond Jubilee celebrations.Has anyone heard of any plans to erect a lasting memorial to this landmark event? Twenty quid's worth of new tiles / same structure ought to do it?
Top
Post Reply
18 posts