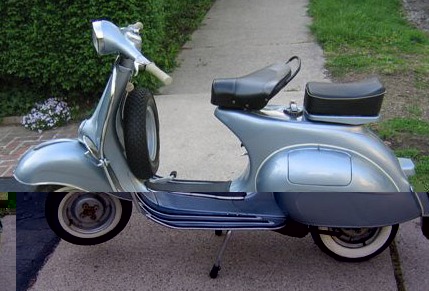 During the 60s in England, the youth of the time fell into one of two subcultures: mods or rockers. Mods were all about bright, loud, outlandish clothes, and their choice of two wheeled transport was the scooter (Lambretta or Vespa). For rockers, the choice of clothing was simple, blue jeans and a ‘T’ shirt, along with a black leather (studded) jacket. Two wheeled transport for a rocker was a motorcycle, and the bigger and faster the better. Home base for many of the rockers was their local café. For many, what had once been a small café supplying transport drivers and local factory workers, blossomed during the 60s into a meeting point for hundreds of motorcycle riders. The most famous was, and still is, the Ace café on the North circular road in London, but there were many cafés throughout the UK during that period and most would be used as a meeting point for bikers. For the most part, bikers were welcome in the cafés, they were, after all, buying food from the owners, but some cafés attracted a rougher element which often resulted in fights. And fighting was almost certain when the mods and rockers converged on seaside towns during national holidays (it was common to see riot police trying to keep the two groups apart in towns such as Brighton in Sussex). When it came to the machines the mods or rockers rode, the difference couldn’t have been more extreme. On the mods’ side were highly decorative scooters with mirrors mounted on every conceivable location (following vehicles with powerful headlights played havoc with the scooter rider’s visibility!).Performance increases for the scooters were generally restricted to fitting expansion chambers and some head and port work on their 2-stroke engines. Choice of motorcycle for the rockers was varied between manufacturers and models, but was based on conventional motorcycles of the time. Popular amongst the rockers was the Triumph Bonneville and the Norton Atlas and later the Norton Commando. But the ultimate rocker’s bike of the 60s was the Triton. Using the Norton featherbed frame and a Bonneville engine, the Tritons had the power and handling all in one package. As with many young people, going fast on a motorcycle and the inherent danger in doing so was a big attraction. Before long, a new style of motorcycle became popular: the café racer. The look of the café racer was determined by necessity to a large extent. For example, clip-on handlebars or ace bars were important to keep the rider out of the air stream (lower). When clip-ons were fitted, it was often necessary to fit rear-set footrests, to give the rider enough leg room, too. And so the café racer look began to take shape. Many of the motorcycle riders were road racing fans, so tuning their bikes or making them look like the racers of the time was common. Their machines were not for use on proper race tracks, but for riding hard and fast on the streets; in particular, riding fast between two cafés. Although the Ace Café in London was the best-known, riders would meet at cafés all over the UK (a country blessed with hundreds of miles of winding country roads, not unlike the famous TT course), then race to another. Being chased by the police was common at the time, but the police were not equipped with such powerful, fast machines as the rockers--the result was that café racer riders often got away with their antics. The cafés themselves began to take on a look, too. Inside a typical biker café would be a juke box playing 50s and 60s pop songs, some pin ball machines and some tables covered by the usual 60s plastic table clothes. The walls of the biker’s cafés often depicted well-known local riders. Some were known for their racing exploits others as gang leaders. The food supplied in bikers cafés was typical English food of the time; generally greasy (fried) and based around the full English breakfast: bacon, eggs, beans, tomatoes, fried bread and a cup of strong English tea (served hot with milk and sugar). For many bikers, the café of the 60s was a home from home. A place where friends met, relationships were formed and motorcycles were always high on the conversation list.1960's ... Seacroft was our home turf, the Sovereign our place of watering and feeding, Sherburn café was our place of gathering and Scarborough was our place of relaxing. I was lucky to meet my wife (and she still is) who was part of our Chapter in the 60's.
Is this the end of the story ...or the beginning of a legend?
Top Does that make you a Hells Angel then BS? Ie My Chapter?
Is it me or has Leeds gone mad
Top

I was too young in the 60's to fully understand exactly what was what re Mods, Rockers, Greasers etc so thanks for the good read buffaloskinner!
Top

I was a mod in the 60's and went to the cafe bars and clubs mentioned. Loved the Three Coins although it wouldnt be allowed nowadays. It was a cellar with no escape accept thestairs which was a danger. I used to go to all nighters thereand the sweat used to drip off of the walls and ceilings. Therewas only one girls toilet and we used to drink orange juice.The mods that did the same scene were either on drugs or not.I preferred the NOT and am still alive to tell the story.I remember when a guy called Rod Stewart came to do alive gig with his friends Long John Baldrey and someonecalled Reginald Kenneth Dwight. We all know who he became laugh.Great days and could we dance - all night - dont know howwe did it? I also used to go to the Shed at Elland Road. My friend and Iwere some of the only girls who went in the middle of all theblokes and when they pushed forward when a goal was scoredwe generally landed on the floor and then picked up bythe guys around us. It was a laugh, but I now realise it wasdangerous. Didnt like Greasers as they were not into Motown. Brought back memories with my white lipstick and shorthair longer on one side and a long fringe over one eye. laugh.Thought I was the bees knees.
On Ilkla Moor ba'tat!!!
Top

My Dad had a Lambretta scooter in the early '60s, tuquoise and cream. Wish I had a pic of him and my mum in their matching cream leather covered helmets! When he passed his car test we upgraded to a Austin A35 van, luxury!
Top
Post Reply
58 posts