I'm still not too sure whether I believe in anything like this despite having a couple of 'experiences'. One in my twenties whilst staying in Brum and another that relates to Howley Hall Golf Club on the road to Morley/Batley when I was around 12/13.There was an old hall up by the 17th fairway that was blown up during the civil war (it features in Ken Goors book). My dad was a member at the club for 30 years and we used to walk our dog round the course on a Sunday afternoon in all weathers. We then usually used to go back to the club house (him for a couple of pints and me for a coke and a bag of crisps!!) This particular Sunday evening it was winter time and the club was very quiet due to it being dark around 3.30pm and all golfers going home. My dad was playing snooker in the games room with 3 other guys and I was sat in the TV room on my own. The clubhouse was originally the old gatehouse to the manor and still has original parts in use. I needed to go to the toilet which in those days were situated near to the pro shop and old locker rooms. This was about a 2 minute walk from where I was sat watching the tv. It involved walking past the main entrance and down a small flight of stairs into the old part of the clubhouse. I'm stood there having a wee and I heard a small sound behind me that was like the door opening. I ignored it and carried on assuming that someone had followed me in. It was about 10 seconds later when the hairs on the back of my neck stood on end and I turned to find that there was no one else in the toilet with me!!!It was a very eerie feeling and to this day I dont know what it was but it made me very very wary about going down there again alone. If you read Ken Goors book there's a couple of tales about ghost sightings at the old hall ruins and also at the farmhouse next door to the actual clubhouse but none about the clubhouse itself.
Top

This picture was taken by a friend of my SIL. It is just a random pic of her daughter. She was testing her new camera phone. Another ghostly figure can clearly be seen stood behind the youngster. If you zoom in it looks like the 'ghost' has no eyes! Very strange indeed. 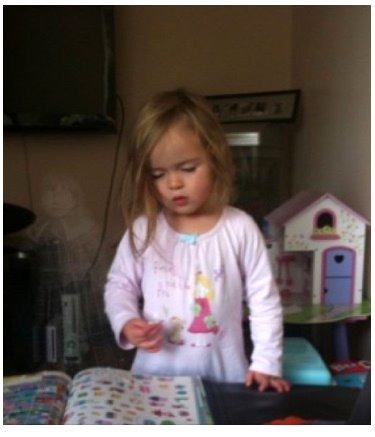 is there also something over her right shoulder or is it me with the photo playing tricks?
Top

JanCee wrote: I saw - well I hesitate to call it a ghost - something at our youth club. It was Middleton Hall 'Miggy Hall' as we knew it at the edge of East End Park near Ivy Street.The unused upstairs was reputed to be haunted so we all trooped up there one night and held hands in the dark. The youth leader sat in the 'haunted chair', a wooden chair with a cross cut out of the back panel. After about five minutes everyone had started joking about and making 'Wooo' noises, but then Dave started to breathe very heavily. It was a freezing night and we could see his breath in the air thanks to the moonlight outside. He started tearing at his collar as if he couldn't breathe and fell to the floor. Someone switched the light on and everyone rushed to try and help him. He came round quite quickly but couldn't remember what had happened. We didn't go upstairs after that. I don't remember this incident, but I certainly remember Miggy Hall, which is where I met my husband Dave, now married 41 years. Had some great times there, but walking throug East End Park at night was very spooky and scary.
Elaine Forth (nee Care)
Top

Hi i am new to this but does any one have any information about Lotherton Hall?? i have experienced hauntings there, epecially the picture of Alvary in the drwaing room.
EnRiQue
Top

bigpants wrote: there's good old Mary Pannel who hangs out in the woods which now bear her name (A659 cas vegas to garforth, near kippax cross roads) who was the last (alleged) witch to be burned at the stake in England. She was accused of having put an incantation on the master at nearby Ledston Hall. Needles to say a fair trial and a burning later and shes not too pleased and has been hanging about the place ever since.Have also seen some very weird things myself at Lotherton Hall. Hi i heard you have seen some very weird things at Lotherton Hall? what were theese weird things? because i have also experienced very strange things there too, especially in the drawing room and the picture of Alvary.
EnRiQue
Top

riotscar wrote: Hello all Wow, as a teacher of History and a Leeds history obsessive I think this website is amazing!I also have quite an interest in the paranormal aspect of Leeds so thought I'd add my 'ghost' story........My family are all from Holbeck which is a very old area of Leeds and has quite a chequered history itself. My dad tells me the tale of when my grandad was a young boy he lived in an old Holbeck house with his parents and many brothers and sisters. One night he'd been sent to bed and was making his way upstairs when he stopped on the stairs to see a little girl in Victorian clothing walking backwards and forwards on the landing in a mraching style. She was wearing what looked like smart Sunday school type clothing.Obviously being so young he was a little confused and didn't realise this could be a spirit so returned downstairs to tell the rest of the family that 'a little girl was walking around upstairs', his step father went to looka nd also saw the little girl who was completely oblivious to anyone else! Bless her......After that I'm unsure of what happened next......The story does make some sense though as the house was near an old Victorian church where local families would have attended church services back in the day.I'm unsure of the exact location, think it was somewhere near top moor side? Mint Moor if that makes any sense?!****** stop press ******After just speaking to my dad he's reminded me that the little girl was a Catholic girl and apparently she was recreating the Catholic Sunday marches that they used to take part in around there.My grandad actually knew the girl in life and remembered when she died so whether it sleepiness, mind playing tricks or the paranormal I don't know.Hope people find this interesting hi all as a paranormal investagator, ive done a lot of ghost hunts and the one that stands out in my mind is kirkstill abby, when they say move you move lol. Bolling hall in bradford is fab i would reccomend anyone to go there, sarah is lovely ? bigpants wrote: many years ago when i was nowt but a lad, myself and a young lady found ourselves at lotherton Hall enjoying the evening air as it were. We were in the car parked at the top of the front field near the main road looking back down the hill towards the stables buildings. It was just falling dusk and there were a few other cars about. I was watching a guy running up the hill towards us, probably about 300 yards away, he was chasing a dog. the best i can say is that after a few seconds he just wasnt there anymore, and neither was the dog. No flash, no puff of smoke he just wasnt there. he had been running across open ground with nothing to dissappear behind or into. I turned to the now very pale looking young lady and we both said "did you see that" at excatly the same time. Worst thing was having to drive right past the point where hed vanished in order to get out. still makes by blood run cold nearly 20 years later. Omg that is so strange because Alvery Gascoigne had a dog called black michael and rumour has it that the house is haunted by the ghost of the dog called Black Michael, which, on occasion can be heard scratching at doors.There is a picture on here http://www.yorkshireeveningpost.co.uk/y ... 5745313.jp I wish i had found this thread a few days ago just spent ages reading all your messages. I started a thread other day but i think i offened people and i got what i would call rudeness. I am a Paranormal investigater based in Leeds. Always looking for locations that might be haunted. My Team have visited some places in Leeds that live up to their stories. The Abbey Inn pub was a great investigation. Kirkstall Abbey was another great nights investigation. I am always intersted in anything Paranormal, i can see spirits have done since i was small. I have had to do few house clearings from nasty spirits too. I am really pleased to meet you all Yvonne Paranormal Addicts Team Leader
Top
Post Reply
194 posts