The green spaces and places of Leeds
Post Reply
46 posts

Great picture of the entrance to Belindas and a cracking advertising hoarding for the new Vauxhall Cavalier right above and old Cavalier. 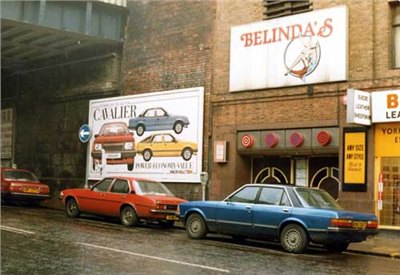 Ravioli, ravioli followed by ravioli. I happen to like ravioli.
Top

HelloCan anyone remember any of the shops which were on the corner next to where Belinda's was located (from around the late '70's.)I have vague memories going into a shop around that area with my parents when I was quite young. (possibly some kind of furniture shop)Thanks for any info you may be able to provide.
http://www.flickr.com/photos/slw74/
Top

Ha... I met the misses there in 1985.. It was called Rockshots then... Oh yes those were the days! Bands like Fine young cannibals, Go west & Prefab sprout were in the charts!! Bloody hell

Is that just above where Break for the Border is (was)?
Top

Yes Break for the Border is/was on the corner. That is where the shop was that I am trying to remember. I did mention a furniture shop but a leather shop is also coming to mind.(I can vaguely remember stuffed animals as well !!!!!)
http://www.flickr.com/photos/slw74/
Top

It wasn't 'Wigfalls' was it? They had shops in a couple of locations around there, but stuffed animals rings a distant bell too... that doesn't sound like furniture though!
Emial:    [email protected]: [email protected]
Top

Wigfalls was on the corner i think..after that in the 60s or 70s it was a furniture store...on two floors...they sold many things things including lamps and accessories..i do recall stuffed animals too...I used to walk up there every lunchtime....as an office junior ,i bought clothes from Class opposite...when i was 18 used to go in the Viaduct..was a decent pub then..a rugby and football pub...not sure if its still there now..
Top

The Wigfall's shop (Cycles and radio) that I remember wasdead opposite Watson Cairns(Lr.Briggate) Got my first NEW 'situpanbeg' bike there in 1942! (12th Birthday) So proud of my new 'Wigfall's Royal'!It was so big and heavy I looked like a pea on a drum! Could'nt put my feet on the ground when stopped so had to leap off and steady it! I think it must have been prewar stock as you couldn't buy a cycle unless you needed it for going to (war) work! It Cost my Mum £6.19.6d! Wouldn't buy you a puncture repair kit nowadays!I'm sure there was a small auto repair garage in those Belinda'spremises. early 70's. Then a Hertz(?) car hire firm. Could be wrong.Shops etc change hands so ften these days. On the opposite corner across The Calls was a Gay bar, I think!No further gen re furniture shop. Maybe the 'stuffed animals' were 'free' in the Gay bar?Cheers!Arry Awk
Top

I'm glad some of you recall stuffed animals. Whenever I have asked anybody about the shop/animals they have looked at me as if I am cracking up.I remember Class as well, it was a great clothes shop, it's a shame it closed down.
http://www.flickr.com/photos/slw74/
Top

parksider wrote: .when i was 18 used to go in the Viaduct..was a decent pub then..a rugby and football pub...not sure if its still there now.. Well its probably a couple of years since I was last in but I do no think it has closed down since.I seem to remember animals too on the corner of the calls and lower briggate. Could it have been a leather and fur shop in the days before animal fur coats became a no-no
living a stones throw from the Leeds MDC border at Lofthousehttp://tykebhoy.wordpress.com/
Top
Post Reply
46 posts