Thanks MiggyBill. here are my ponderings.
My previous post is from the Crich website page describing the trans history. As previously mentioned I know nothing about trams but am very familiar with aircraft restoration which I assume may be similar. When repairing/reconstructing an aircraft, they make every effort to use the original components. If necessary items are scavenged or could be manufactured, most museums have an engineers workshop. It is normal to remove all the existing, scavenged and new access panels and components and repaint them. This gives the opportunity to change the colour scheme and the squadron numbers etc. They do not change the original manufacturers numbers which are stamped/stenciled on most of the components/and sub-assembles. A replica aircraft which does not have all of the original structure, can be displayed and taxi on the runway but is not be permitted to fly. Some museums adhere to the original manufacturing methods, using the correct nuts bolts and rivets etc which requires lots of research and expense, others focus only on the aesthetics, and use modern components where they are not seen by the public. It would make sense to repaint the tram, including the text and numbers, but what methods of reconstruction they used would depend on their finances.
Top

Hello again, I've just read everything I can about these two trams in all 5 volumes of J Soper's superb Leeds Transport books and the annual fleet list of LCT and can only come to two conclusions,

The 180 at Crich is actually 189 and was part of an insurance fiddle. For example, 189 is damaged in March 1958 by a West Yorks Bus. For insurance purposes it is written off. LCT then repair 189 but claim it is 180 that has been retrucked/renumbered, get a payout and a tram back in service by April,,,,luvvly jubbly and all that. This definitely happened to several other trams although fleet numbers are not divulged and is explained on page 1415 Volume 4 J Soper.

The only other explanation is that the 180 at Crich really is 180 albeit but with at least one end of 189. Crich may have found further evidence as to the correct fleet number of 189/180 when they refurbed years ago, however if there were no further unique identifying features/serial numbers etc then the mystery grows....

Personally I like the insurance scam....but then who doesn't love a good conspiracy, perhaps there is a third 189 on the grassy knoll.
Top Hello all. Finally able to log in,like the new layout,colour,etc.

I'm surprised that nobody appears to have noticed the original,fire-damaged front panel in the original photograph.It is on the ground a few feet to the left,as viewed,of the new front panel.I'm guessing the new panel was placed there for the purposes of the photograph.
Also sad to read about the loss of Jim Soper earlier in the thread.An excellent photographer who left us a great legacy,RIP.
Top

There are a few burnt panels on that picture all unnumbered.
Any particular identifying mark tying it to the tram in question?
Top

The panel I'm referring to is the one standing upright just to the left of the tram. I don't think there's much else that can be indentified. Just assuming it came off the fire damaged tram in the photo.
Top

That particular panel appears to be connected to the burnt out remains of another tram.
Top

Here's a pic of the interior fleet numbers of Tram 180 at Crich.
I wonder what number they said when Crich took ownership back in 1960?

The more I think about this the more I lean towards the tram at Crich being 189 body as well as 189 trucks. Here's a pic of 180 at Crich not too long after it had arrived, you can see that someone at Crich has changed the 9 in 189 to a 0 to make it 180. This end panel doesn't look like it has been off the tram recently.
In the early days at Crich they would have taken the paperwork supporting the 189 truck / 180 body at face value, they would have had no reason to query it, and they will have wanted to have trams as original as possible. That is until the photo of 180 in the scrapyard surfaced 50 plus years later.
Mr J Soper, who sadly passed away only the other day, and I use his name with the utmost respect, states in his excellent 5 volume LCT history books that there was several trams renumbered, (or only appeared to be), to maximise insurance payouts and minimise repairs. I believe that 189/180 is one of these.
Of course it could be as stated, 189 truck, 180 body but if that's the case then the 180 at Crich must have at least one end panel from 189, see 180 in the scrapyard.
Unless there are other identifying features / serial numbers etc to identify this as 180 then I'm beginning to believe this is 189 in it's entirety. 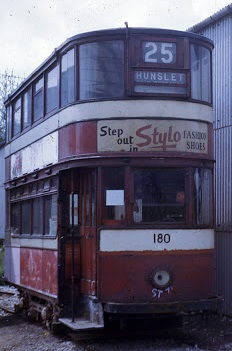