When i lived in Bristol i had occasion to call in Trinity Road Police Station back in the 70s. The thing that caught my eye in there was a lifesize cream marble statue of an Officer who had been murdered back early in the Century. it was on a large stone plinth and most striking with his old style helmet, uniform, truncheon etc. No disrepect to the brave Officer John Speed but it just shows how rare it was to have an Officer murdered, certainly at least n that area.
I certainly ever never seen, either before or since as anything like that statue.
Top

Hi volvojack you say you had occasion to call in Trinity Road Police Station.I hope they did not put the cuffs on too tight.He.He.

Hi tilly, will answer this on another day as some may think my reply not appropriate on the John Speed page.
Regards Jack Daly.
Last edited by volvojack on Wed 05 Apr, 2017 8:50 pm, edited 1 time in total.
Top

It has recently been reported that a wreath at the John Speed memorial has been damaged and that it may have been a deliberate act. It's very sad if that is the case. This is a photo that I took on November 6 2018 of the memorial with a new wreath that has now been placed with it. 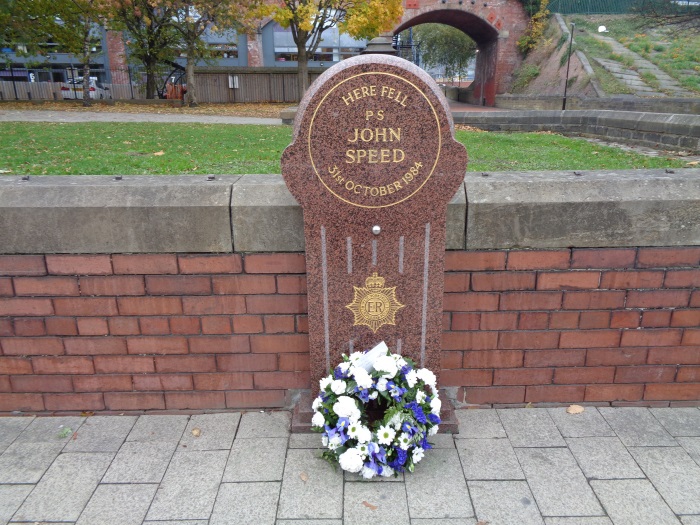 Two sad things about this Memorial. Firstly he did not fall he was was brutally murdered whilst in the course of his duty and the scum that damaged his Memorial are sadly just are some of the nationwide element that seem to want desecrate / damage anything for no apparent reason. Also a Monument on the edge of Gloucester Park listing all the Forces killed in both World Wars has been vandalised This is a list of all the 3 Forces including the "Glorious Glers " that performed such heroics acts in the Battle of the Imjin River. If someone could just explain what satisfaction they get from these acts.
As i type this i can see a news item about a 98 year old man being violently attacked and robbed in his own home. A Police spokesman said the amount of violence of used against such a frail person was disgraceful
This old gentleman had served his country during the Second World War
Top

The Police Memorial Trust erects these memorials and the "Here fell" wording is normal.

One exception (and there may be others) was PC Keith Blakelock, whole memorial was erected on his usual beat with the inscription "Here worked."