[quote="tilly"]When you think about it Jack pouring a pint of beer up your nose would have taken some doing. He He.
Mmmm...
Top

I understood what you meant about up their noses in response to my comment about crack. On the general subject of beer, am I the only one to notice how the days of a full pint are long gone? There's a history to this, going back to the introduction of Draught Guinness which I won't bore anybody with, but I was pulled a "pint" yesterday - not in Leeds - and the top of the head was a good half inch below the rim of the glass, and it wasn't one with a line showing a pint.
Top

Re Guinness jma, there was a court case in 1964 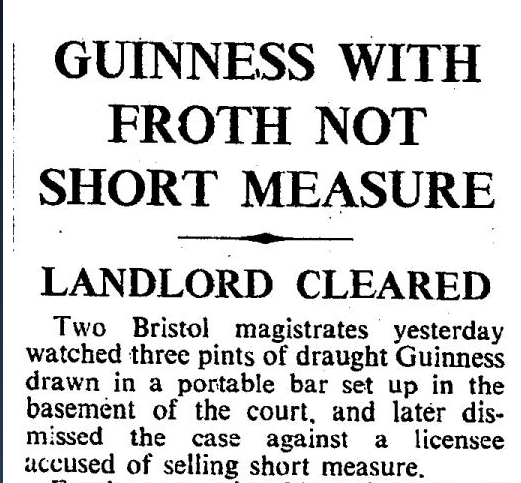 I understood what you meant about up their noses in response to my comment about crack. On the general subject of beer, am I the only one to notice how the days of a full pint are long gone? There's a history to this, going back to the introduction of Draught Guinness which I won't bore anybody with, but I was pulled a "pint" yesterday - not in Leeds - and the top of the head was a good half inch below the rim of the glass, and it wasn't one with a line showing a pint.

Hi jma.
I know what you mean about being served short measure, as some uuse oversized glasses and some do not it is difficult to tell.
Years ago when we went down South on Holiday the beer was usually served without a head (flat as a f..t) and never seemed to taste right.
I began drinking Lager in the 1970s when the quality of draught beer seemed to get very hit and miss.
Although the hand pumped Autovac system began to be looked upon as very unhygienic I always preferred my beer drawn off that way.
I did try some "Real Ales" cask conditioned etc. but as i only had an odd pint I was never taken with it. I guess maybe I should have persevered. another factor was that Special brews were nearly double the price of the ales I was used to drinking.
Top

[quote="uncle mick"]Re Guinness jma, there was a court case in


Uncle Mick,
Do you have any more details concerning this case i.e. which pub and name of licensee etc. I moved to Bristol mid. 1970s and my pals and I must have visited every City Centre pub.
I was sent there in the mid. 1950s in the R.A.F. and at one time I bought a book on Bristol. It did mention that the Town was known for weak beer and many Churches and they were right. This was a time when brewery's took a pride in their beer.
The two Brewery's in Bristol were "Georges" and "Courage" (both like horse p..s )
The most popular drink there years ago was Cider which was about half the price of beer. Only problem was drinking "Scrumpy" which was it was nicknamed Rough and that is just what it was. Not like the trendy Cider that is sold in upmarket Bars these days. This was cloudy and had bits of apple floating about in it and gave out Hangovers for one and all.
Top The rest of the article Jack
Top

Thanks Uncle Mick for that, not only is it interesting but it shows how stupid some council officers can be.There can not possibly be anyone who would not want a pint of Guinness without that creamy head on it.
Thanks also about the Sandringham, it is a big fine old pub between Bristol and Bath but i never ever really went that side of town much. Thanks again Jack.
Top

Thanks for that cutting - not least to have evidence to support what I quite often bang on about to an incredulous audience. Prior to that Draught Guinness case, a pint was a pint and Weights and Measures officers enforced that quite rigorously. There was then some sort of enquiry and, perhaps not surprisingly, all the breweries piled in with evidence about how their customers preferred to spend their money on froth rather than beer. Tetley's said that their customers demanded a "tight head" on a pint. The result of the enquiry was that the then Labour Govt., made a Beer Order confirming that 1 pint = 1 pint, not some beer + froth. Although they made the order, they never got round to deciding the starting date and a later government with more connections to brewing quietly dropped it. I know all this because it was all recounted in the annual licensing law bible whose name I've forgotten. In law books of that type, legislation waiting to come into force is shown with a black line down the margin as a warning not to jump the gun.

I remember a joke from the early 1960's in a magazine like the Dalesman about dour Yorkshiremen where a customer asks the landlord if he could get a measure of whiskey in with his pint and when the answer was "yes" the customer told him that in that case, he'd have his glass filled with beer.

AFAIK, licensees in one Yorkshire Brewery's houses are expected to make 5% on froth ie if they sell full pints they are in bother in the same way as if they fiddled the takings. I had a pint last Thursday on the border with Lancashire and the froth finished half an inch below the rim in a pint-to-the-top glass. I always order my beer first, then my wife's wine, which gives the beer time to settle and stare at it, which generally gets a top-up. I don't ask for a top-up these days because I have diabetes and I'm supposed to keep down the calories.

I've had a pub lunch today and I was amazed to see that the guest beer was Clearwater. That's the way it's heading.

http://www.clearwaterbrewery.co.uk/
PS - if iansmithofotley reads this, he'll remember the name of the book about liquor licensing legislation. Geronimo! just typing this has reminded me it was Paterson's Licensing Laws. Memory not gone altogether. (I was thinking that Paterson's covered Road Traffic Law, but that's Wilkinson's.)
Top

You are right about Paterson's Licensing Acts. It was about 3" thick (about as thick as one volume of Stone's Justices Manual). I bought a copy of Wilkinson's Road Traffic when I was studying for the promotion exams. I still have a a two volume copy of the Home Office Manual of Guidance (now 30 years out of date).

Just to explain to others what Ian and I are on about, in our day police officers were expected to learn a lot of criminal law, much of it by heart during initial training, and for anybody seeking promotion, there were two written promotion exams - both entirely based on criminal law, which had to be passed. In Leeds, this was known as "passing your classes" but I think that originally referred to different stages of police progression. Not that it matters. There are also specialist courses for CID, Road Traffic etc.

Unfortunately, they keep changing the law, and it's never as easy to relearn from a book, something you originally learned by heart. There are various legal tomes on different subjects, some extraordinarily specialised to one small area of the law. There are some, published annually, which are considered the "bibles" such as Stones (Justices' Manual) which when I last saw it was in three volumes, printed on extra-thin paper but still each volume was at least three inches thick, all in a plastic carrying case. The covers were in a different shade of blue each year. Paterson's and Wilkinson's were others, only slightly thinner. These books are inordinately expensive, partly because they will never be best sellers to a wider public and they take a lot of writing and updating. Even so, with half-a-dozen police stations in Leeds City Police, plus headquarters, that's quite a big annual bill. The result was that each chief superintendent would get the latest edition, and last year's would be passed on, or rather down, so the sergeant's office would have something about ten years old. Those were the days. Digital technology will have changed all this.
Top
Post Reply
20 posts