Unusual markings, logos and symbols around the city
Post Reply
4 posts • Page 1 of 1

It has been many months since I last walked on Little Neville Street to where it meets the Dark Arches so it was a surprise to me to see there is a large metal disc (several feet across) embedded on the ground there just before the Dark Arches. The disc shows the directions and distances (in miles and kilometres) of locations ranging from local to major places in the World. These are 3 photos that I took of the disc on June 29 2017. The feature may already be well-known but it was not by me! 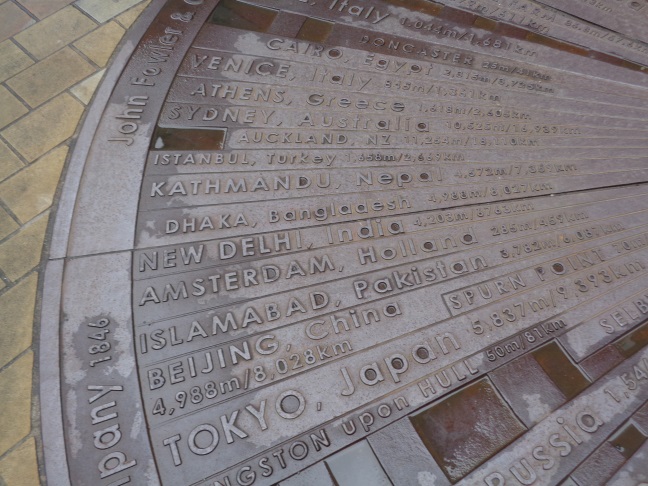 It was created for the revamped Little Neville Street when the New South Side Station exit/entrance was opened almost 12 months ago.

Here is a link to the revamped area.

http://news.leeds.gov.uk/little-neville ... ds-station
Is this the end of the story ...or the beginning of a legend?
Top

Thanks for the really good pics of something I'd not otherwise have seen.

Meanwhile, the chaos at the main, eastern entrance to the station continues. A smooth flow of traffic depends on a scrupulously observed set down/ pick-up policy, with no waiting and zero tolerance for selfish users. As it is, I see chauffeurs with limo's waiting unashamedly and unchallenged for their selfish and self-important bosses, while the queue of people trying to access the station tails back into City Square and Aire Street.
Top

Thanks buffaloskinner for the link to the information

. As the Leeds City Council news is dated 23 August 2016 the 'cast-iron compass rose' to my surprise has been there longer than I thought. After the flooding of the area on and by Little Neville Street (LNS) on December 26 2015 I visited several times afterwards but clearly I've not been on that bit of LNS since at least the report day, though I do often use the foot bridge over the river and pass through the Dark Arches but both bypass that bit of LNS. I must change my routes more often

Thanks jma for liking the photos

. Yes, as you say it can be chaotic at the main set down/pick up area. Even trying to cross as a pedestrian can be hazardous in that area.
A rainbow is a ribbon that Nature puts on when she washes her hair.
Top
Post Reply
4 posts • Page 1 of 1