From electrical daveThe Chemic in Woodhouse, and the street on which is stands both get their name from the nearby Johnstons Chemical Works whose main product was sulphuric acid ( back then it would have been called Vitriol or oil of vitriol), although it also had other chemical products.The factory was demolished in the 1890's, and the 'Marions' streets of housing were built in its place.For the middle and later Victorian history Woodhouse, and the nearby part of Meanwood have been involved in chemical and dyeing and before that Woodhouse especially was pretty much out of the Leeds industrial miasma.
'Are we surprised that men perish, when monuments themselves decay? For death comes even to stones and the names they bear.' - Ausonius.
Top

The Marians, site of the former Johnston's Chemical Works, from which the Chemic Tavern took its name.Pic from www.leodies.net 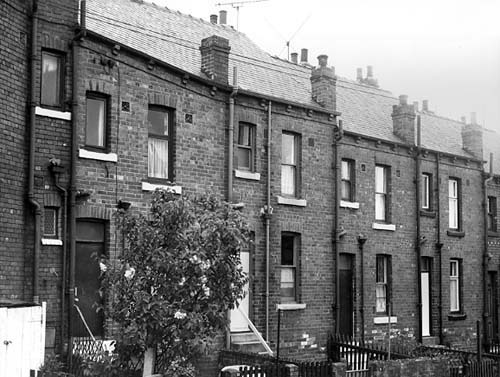 Hi Munki,Your photograph is of Back Marian Road which ran parallel with Woodhouse Street. In the 40's and 50's I was brought up in Eltham Terrace which was just off the location of the photograph. This would be about 250 yards from the Chemic Tavern. I also went to Quarry Mount School which was another short distance behind the Chemic towards Woodhouse Ridge.The landlord of the pub, at the time that I lived there, was Clifford Peel. My father and grandfather were founder members of the Chemic Angling Club (which is apparently now defunct).There are photographs of the pub on the Leodis site, along with Slingers Fish and Chip Shop, which was between the pub and Woodhouse Street.In my recollection of my childhood, the area was a good working class area. When the Marians, Elthams, Jubilees, Holborns, etc., etc., were demolished and replaced with council houses, the area seemed to become an overflow area of Chapeltown. At the same time, students started to move into the area and rent houses, particularly around the Delph Lane, Cliff Road, Quarry Mount and Ridge areas. The knock on effect of all this was an increase in crime (burglary, robbery, theft, motor crime and criminal damage) and all that goes with it and the area has, sadly, never recovered.Ian
Top

the chemic was one of many leeds pubs that brewed its own beer . i have a scan of one of their beer bottle labels and if i can figure out how to i will post it.
Top

Return to “Pub Names & What They Mean”