Quote: i have been told there is a similar thing running from the corn exchange to the bottom of the market. a closely guarded secret if it is... my ex-lodger worked there for about 10 years and didn't know anything about it... it was the sort of thing that would have piqued her interest...
Evil and ambition scatter in the the darkness, leaving behind dubious rumors to fly in public. To the next world, I commit thee.
Top

Alright guys, just found this forum and was fascinated by the pictures and numerous threads so I thought I'd join. I love all the mystery surrounded in old tunnels etc and I wasn't even aware that these tunnels even existed. The myths regarding circus animals seems a little far fetched. There was however a plan before or after the war to build the train station with underground tunnels that trains would use but it was unfortunately scrapped. There is a render of it on the Leeds Transport Solution Thread on Skyscrapercity, I'll try and find the link.From looking at a member's blog on SSC (who is also into urban exploration) he's managed to get inside some disused railway tunnels in the Leeds and Harrogate area which were previously used as air raid shelters during the war and they had a simlar look to them with the benches etc as the tunnels underneath the City Station. Maybe they were used for that during bombing raids?
Top

Here is the link. If you scroll just over half way you'll see a section through the proposed plan for the station. The post is by WiggleyLeeds.http://www.skyscrapercity.com/showthrea ... 11&page=27
Top

Nottsman87 wrote: Here is the link. If you scroll just over half way you'll see a section through the proposed plan for the station. The post is by WiggleyLeeds.http://www.skyscrapercity.com/showthrea ... 11&page=27 ITS NOT ME...BEFORE ANYONE STARTS!!!!!
i do believe,induced by potent circumstances,that thou art' mine enemy?
Top

wiggy wrote: Nottsman87 wrote: Here is the link. If you scroll just over half way you'll see a section through the proposed plan for the station. The post is by WiggleyLeeds.http://www.skyscrapercity.com/showthrea ... 11&page=27 ITS NOT ME...BEFORE ANYONE STARTS!!!!! Now, can we be sure of that, seen this plan shown on here before, hmmmmm!
Emial:    [email protected]: [email protected]
Top

There is/was a pain in the neck who posted on the bbc leeds messageboards who ended up as WiggleyLeeds. He was obsessive as to how the glut of modern riverside apartments in Leeds and a 24 hour (outdoor) cafe culture were needed for Leeds to be a major player.He would not accept the buy to let of shoeboxes in "jerry built" skyscrapers was not particularly good for Leeds' architecture and image. Nor would he accept there are plenty of places in Leeds trying to offer the outdoor terrace cafe culture but the climate only really permits it for about 30 days a year.I suspect that this is the character on skyscapercity and if it is is views are virtually diametrically opposed to the Wiggy on here we know (and love?) I eventually came to the conclusion he had a vested interest (commission?) in selling city centre properties. So was in the employ of a major developer or was an estate agent based in LS1/2/3
living a stones throw from the Leeds MDC border at Lofthousehttp://tykebhoy.wordpress.com/
Top

wiggy wrote: Nottsman87 wrote: Here is the link. If you scroll just over half way you'll see a section through the proposed plan for the station. The post is by WiggleyLeeds.http://www.skyscrapercity.com/showthrea ... 11&page=27 ITS NOT ME...BEFORE ANYONE STARTS!!!!! you'l get thee death o cold wiggy lad put yer clobber back on lol 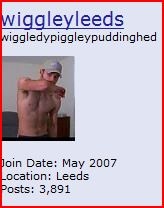 There are only 10 types of people in the world -those who understand binary, and those that don't.
Top

i'm hearing you loud and clear on that one lol
Top

i'm hearing you tyke boy on that 1 lol
Top

Trojan wrote: Sam Compton wrote: Thanks for posting these intriguing photos of what lies beneath Leeds City Station. I remember as a child daring myself to sneak a look at the curdled froth of the Aire as it passed through those hidden passages, always accompanied by the dizzying subterranean roar of water and a cloying and unnerving dampness. It seems that the Aire was a lot dirtier back in the seventies.     You should have seen it at Cas in the sixties! my auntie brenda lived in the street next to the bus depot off wheldon road.I couldn't believe it the first time I went to see her.It was like science fiction-the froth came marching down carlton street loke an unstoppable army as high as the buildings. I nearly crapped my self.
I went down to the crossroads and got down on my knees
Top
Post Reply
175 posts