Whether the Picture House was originally a hotel or not, the article to the left of the telephone reveals another use to which the building was put, 14 years after it was opened. SLT have done their best to transcribe it here.Aug 2nd 1928 (written in ink pen on the wall above the article).CHURCH IN CINEMASUCCESSFUL EXPERIMENT BY A LEEDS VICAR St. Augustine’s Church, Wrangthorn, Leeds is in the hands of the decorators, and the Rev H. J. Tompkins, the vicar, has migrated with his congregation to the Hyde Park Picture House. Mr Tompkins told a “Yorkshire Evening Post” reporter that the experiment had been quite successful. “We are holding the ordinary morning and evening services in the picture house” he said. “The Communion Services are held in the Church room. We have had three Sundays there, and the congregations have been very good. “I noticed a good many strangers, whether they were visitors who would anyhow have come to church or whether they were members of other churches attracted by curiosity I do not know. “We do not have the surpliced choir. The choir is much depleted, of course, during August, but those who are left sit in the front seats. “The services have been very reverent, and no difficulties have presented themselves. “I should rather like to try a series of special cinema services, during Lent perhaps, or on some winter Sunday nights after ordinary evening services. “One could judge then whether or no they would make an appeal to people at present untouched by the churches.” 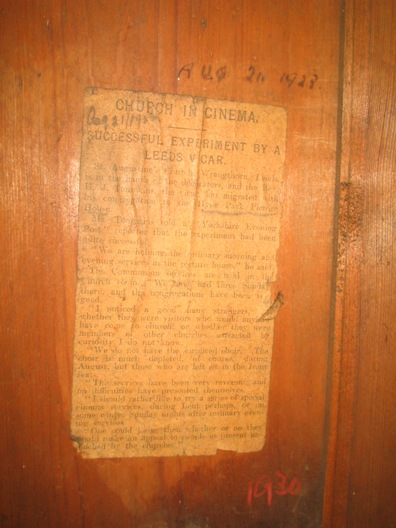 Do any of our Dear Readers out there have memories or stories of the vicar, Mister H. J. Tompkins, or any memories of the Hyde Park as a cinema, or any other uses it might have been put to?The Hyde Park Picture House is one of the great remaining Edwardian Picture Palace Houses, it should be something of which England, and not just Leeds, should be proud. Record your memories of it here.And use the place! Current listings can be found at www.hydeparkpicturehouse.co.uk. Also on this site, you can become a friend of the Picture House, and help to preserve it for the city and for future generations.Tell us your memories of the Picture House here, and look out for the next Highly Irregular Feature coming soon(ish) to Secret Leeds!
'Are we surprised that men perish, when monuments themselves decay? For death comes even to stones and the names they bear.' - Ausonius.
Top

Nice stuff here Munki...Good effort.. It's good to get behind the scenes places.... Are you interested in some more ideas? If got a few cracking things i can think of

Shouldn't be to hard to convince the owners either??
A fool spends his entire life digging a hole for himself.A wise man knows when it's time to stop!(phill.d 2010)http://flickr.com/photos/phill_dvsn/
Top

I have a trip planned for tomorrow morning, which I am already very excited about (to the extent that I am doing some background research on that rather than writing the Best Man speech I am supposed to be giving on Saturday!). So there will be another Secret Leeds feature coming very soon.Of course I would like to hear ideas about potential Future Features. You know the email address, if you don't want to say it 'out loud'!Suggestions for Highly Irregular Features to the Secret Leeds Team at [email protected], please!
'Are we surprised that men perish, when monuments themselves decay? For death comes even to stones and the names they bear.' - Ausonius.
Top

It's in the post... Don't forget about trying to take the suggestor(s) along too.. Have a good time at the wedding bash!!!!
A fool spends his entire life digging a hole for himself.A wise man knows when it's time to stop!(phill.d 2010)http://flickr.com/photos/phill_dvsn/
Top

Been in many times as a kid in its pomp,loved the old phone.In the Yorks Evening News and post there were around 70 Picture houses ,can honestly say i have been in all of them in the late 40.s and 50,s.
Top

You didn't get any pics of the piano and organ back there, or where they not worth looking at?I'm curious, is the sound coming from old horn speakers (there was a common make called voight who made large straight section horns for this sort of application cira 1940s/50s), or has that been updated too recently?
Evil and ambition scatter in the the darkness, leaving behind dubious rumors to fly in public. To the next world, I commit thee.
Top

Wonderful memories of a fabulous evening at the Hyde Park in, I think, 2004. The occasion was a special show to mark the ninetieth birthday of the cinema and the entire programme of around two hours consisted of black and white silent films. The films were accompanied on the piano in the most expert manner by a chap who matched the music to the mood of the scenes as well as any of those in the "silent" days. When we entered the cinema we were kindly treated to a cup of red wine to start the celebration.The whole evening was so magical and convincing, and such a convincing experience, that when we came out it was momentarily difficult to take in the present day scene. I was born in 1936 at 2 Chestnut Avenue nearby, and my Dad was about to enter WW1 just as the cinema was newly opening in 1914. You just had to reflect on the enormous changes in the World and in society in the intervening ninety years - it was an evening that I treasure greatly and I shall never forget it.
There's nothing like keeping the past alive - it makes us relieved to reflect that any bad times have gone, and happy to relive all the joyful and fascinating experiences of our own and other folks' earlier days.
Top

My memory of the hyde park was the gas lights on the walls and the lady walking round with a disinfectant spray at some point in the showing of the film,round about yhe 1950s.
Top
Post Reply
43 posts