Full details of Pool Bank Quarry showing a photo of the brick works and one of the bricks can be found on my web site historyofpool.net63.net
Top

This was taken at Beamish last week there is a tram shelter there the back wall is made with different bricks from all over.

This part brick that was partly buried in the soil caught my eye when I was walking along Crag Lane (Alwoodley) today (April 19 2016). I pulled it out of the soil and found that on one side (the first photo) the letters EDS are seen so I wonder if that whole word would have been LEEDS. On the other side the letters COLD are seen (the O and the D are raised) but I have no guess as to what that full word would have stated. I would be grateful if someone could please let me know what the full words would likely have been. 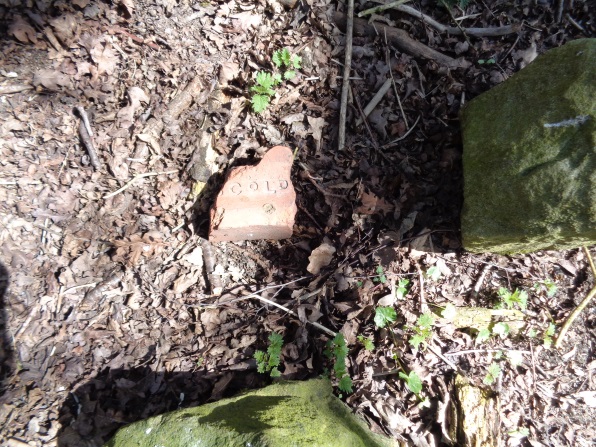 Hi Leo
I'm just guessing but I think the 'cold' is most likely to be 'Co Ld' short for Company Limited. So just as an example I would guess the full wording would be something along the lines of 'Leeds Brick Co Ld'.
The older I get, the better I was.
Top Thanks Bruno and uncle mick for your help

. That it will be a 'Leeds Brick Co Ld' brick does seem extremely likely.

When I was a kid I wanted to be a detective when I grew up. However, as I missed the clues that were there on the brick it's a good job that I never did become a detective as I would have been rubbish!

Hello everyone, a little story about a Middleton Brick.
Back in the early 1990's when my late dad was in his eighties he told me stories of the 1939-45 war and about his best friend, Frank Housham who sadly perished during the Arnhem conflict. Frank lived somewhere near Hillidge Road Hunslet, my dad was from Chesney View. In 1944 Frank was about to parachute into Holland as part of the offensive but unfortunately his Dakota plane was shot down, several of his colleagues managed to bail out but Frank, along with others was killed as the plane crashed into a field just outside a town called Waginengen. My dad was not with him.
My dad expressed his wish to visit his grave if we could find out where it was. I contacted the British Legion supplying them with Franks last known address, (sadly I have forgot where this was but near Hillidge Road) and Franks wifes name, surprisingly the British legion replied with full details of where Franks grave was, not in a military cemetery as we had assumed but in Waginengen village cemetery. I started making plans to take my dad but unfortunately his health was against him and he passed away before we could get there, however in 2011 I made the journey to visit Franks grave on behalf of my dad. Here comes the "Middleton Brick" part.
Shortly before I made the journey to Holland My daughter Sally found an excellent example of a Middleton brick in the rubble of the car park for South leeds Motor auctions, which is where the Chesney street were situated and of course right next to Hillidge road, she dug it up and brought it home as she knows that I am a Leeds history anorak, ahem cough. The night before I set off for Holland I was wondering should I take flowers for the grave or should I buy them once I get to Waginengen then a thought struck me - flowers would look nice but will fade ina couple of days however if I take the brick and place it on Franks grave it will last for ever and will be a small piece of "home" so that is what I did, I placed the brick on his grave, told him it was from my dad. Sentimental I know but it meant a lot my dad.
So that's my story about one particular Leeds brick. pic attached. This little tale has made my day, what a thoroughly decent thing to do.

TABBYCAT wrote:This little tale has made my day, what a thoroughly decent thing to do.

Thank you TabbyCat, I have had a few strange looks when telling people about taking a brick to a grave. If I ever go to Holland again I'm going back to see if it's still there.
Top

That's a lovely tale Billy, but how did you get the brick past customs? Is this the end of the story ...or the beginning of a legend?
Top
Post Reply
82 posts