Where is this carving to be seen in Leeds?

This photo (which I took on June 4 2013) shows a nice carving on a building in Leeds, but which building? The carving is not that readily seen when walking by so though it may be a familiar building this bit may not be well known. As far as I am aware the carving has not been used as a 'What & Where' before, though the building has. Perhaps some cryptic clues for a while from those who know where it is. 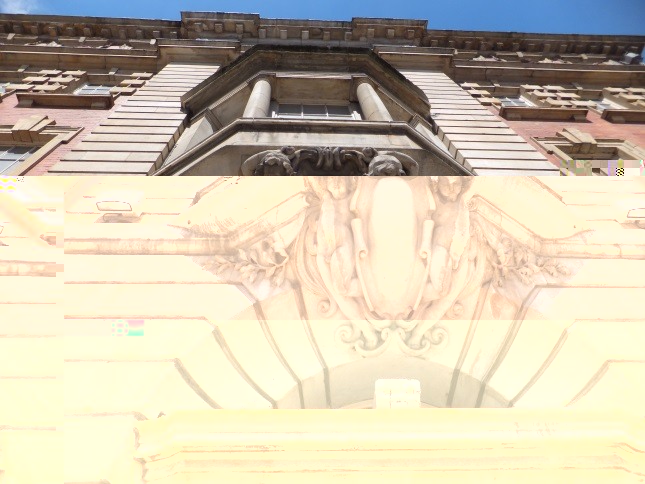 I don't know so a cryptic guess. Would it be a "Permanent" place?
There is enough sadness in life without having fellows like Gussie Fink-Nottle going about in sea boots.
Top

I know that Leo's stomping ground
My flickr pictures are herehttp://www.flickr.com/photos/phill_dvsn/Because lunacy was the influence for an album. It goes without saying that an album about lunacy will breed a lunatics obsessions with an album - The Dark side of the moon!
Top

Think that the one around the corner might have been done though.Who said 'Go west, young man'?Anyway, if he did he would be around 270 degrees out. Anti-clockwise that is.
Top

Leo, I don't know how you managed to take the photo at that angle? I feel sick and dizzy just looking at it! Can I just add that the clues are of no help to me at all, (no surprise there), except maybe the building is/was a bank??
Top

I feel like it may be being dispensed with, but no hearing any more?
Top

Cheers all.The figures are over a doorway on the North Street side of what used to be the Dispensary and later used as a meeting place for the deaf, though it was (may still be) up for sale. Note that this is not the older nearby Dispensary that became a chest clinic and is now a Richer Sounds store. I know that is a listed building but I don't know if the Dispensary building of this thread is listed.Geordie-exile. I would guess your "Permanent" is a cryptic clue to the old Leeds Permanent Building Society Building (now part of The Light complex). That being so I can see why you could think so, as the brickwork in the Dispensary does have a resemblance. salt 'n pepper. The one around the corner may be the figures over a doorway on the Hartley Hill side of the Dispensary that I have previously used in a SL thread. I must admit though that your cryptic clue has me beat! Caron. The figures look down so are hard to photograph in a straight front view, which is why I had to almost break my back in taking the shot at the angle I did. The length we will go to eh to get a photo for an SL thread! LS1. Great cryptic clue. I like it.
A rainbow is a ribbon that Nature puts on when she washes her hair.
Top

The building is known as Centenary House, built in 1904 and it is a Grade II listed building. The sale details and a brochure can be seen at: http://www.estatesgazette.com/propertyl ... 410834.htm
http://www.flickr.com/photos/johnnyg1955/
Top

If every user on here gave £146, it could easily be purchased as an SL HQ, with some change left!
Top
Post Reply
9 posts • Page 1 of 1