How well do you know Leeds?
Post Reply
53 posts

Jogon wrote: (soz phill, drifting off thread) It's all good, I still haven't worked out how this road, bus stop layout worked after all these years
My flickr pictures are herehttp://www.flickr.com/photos/phill_dvsn/Because lunacy was the influence for an album. It goes without saying that an album about lunacy will breed a lunatics obsessions with an album - The Dark side of the moon!
Top

There's one of cliffordstead's photos at http://www.flickr.com/photos/cliffordstead/5500065540/ (won't let me embed a photo) which I think shows the road. The vacant lot/car park is now Morrisons. Between it and the multistorey car park is a T junction for a road. This seems to curve round and come out opposite what is now Yates Wine Lodge. On Street View the entrance to this road would be roughly where the Shop Mobility place is here: http://goo.gl/maps/6aWob and the exit would be the ramp here: http://goo.gl/maps/006yR
Top

Well done mhoulden I think you have cracked it. Using the building on the roof in Clifford Steads photo as a benchmark the road will have run where the red arrow is in the aerial view.The Wimpy Bar etc in this photo would have been just right of the red arrow following the line of the main building
Top

So the road continued left onto Woodhouse Lane dog legging from the red line shown on the last map. No wonder it was a nightmare to get a bus round such a tight bend!Dont forget, the Morrisons was a later addition to the Merrion Centre and was built slightly later.
Top

AgreedMorrisons + the two end towers + roof were later.http://www.flickr.com/photos/cliffordst ... 06503/from the web:"...remembered the Merrion Centre without a roof when the number 33 bus would turn left off Woodhouse Lane at The Coburg and then right into The Merrion Centre where Shearers Music Shop is now, come through where the "square" is, turning right and down the ramp at the side of Morrisons back onto Woodhouse Lane - always seemed like a bit of a dodgy manouvre for a double deck bus..." 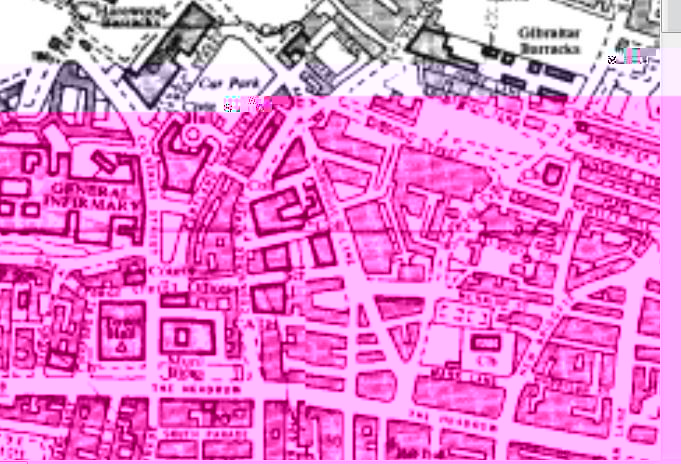 This shows the bus route. Leodis has got its description wrong but a user comment is correcthttp://www.leodis.net/display.aspx?resourceIde ... SPLAY=FULL
Top

This is all fascinating stuff about the Merrion Centre. It also shows just how little I recall (mostly nothing!) now of such as the road that buses took.My mind has wandered to the actor John Wayne whose real name was Marion Morrison. Marion is almost Merrion and there is a Morrison's there!
A rainbow is a ribbon that Nature puts on when she washes her hair.
Top