How well do you know Leeds?
Post Reply
16 posts

Seen this old advert on sl flickrIntrigued as to what it was and who's it was.It's an ad painted on an end terrace shop'Stanley Road 1972'http://www.flickr.com/photos/rig7/8444359937/What was the beer and who did it?Sounds like something for the returnees from Boer then 1st WW 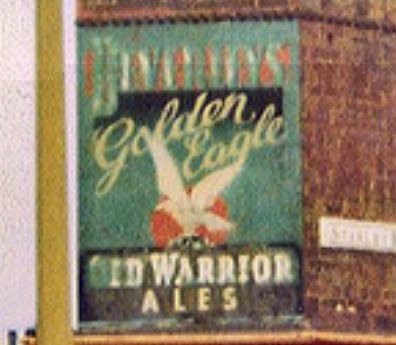 Beverley Brothers, Harrison St, Wakefield. Founded 1861, with 173 tied houses from Lancashire to Teesside, taken over by Watney Mann's Wilsons operation in March 1967, with the usual promise of no redundancies, and closed October 1968. Read about the "Warm Welcome to the latest member of the Watney Mann Group" and see pictures. Its principle beers were Trinity Bitter and Eagle Bitter. Middlesbrough Bitter was brewed for twice weekly delivery to its own pubs, and also clubs, in the Hartlepool area, whilst DPA was brewed for its pubs in Lancashire, acquired through the takeover of John Baxter of Waterfoot in 1952. Also a 6% old ale was brewed in small quantities in the winter. In bottle were Golden Eagle Light Ale, IPA and Old Warrior Brown Ale. After the closure of the brewery, the Wines and Spirits Distribution Plant was kept going until 1971. Much of the site is now occupied by a new health centre, and Fernandes' Old Malt House was once Beverleys' malt house. You can still see original Beverleys glass in windows at the Queen's in Outwood. Take a look at some Beverleys beer mats.
My flickr pictures are herehttp://www.flickr.com/photos/phill_dvsn/Because lunacy was the influence for an album. It goes without saying that an album about lunacy will breed a lunatics obsessions with an album - The Dark side of the moon!
Top

"Invigorating as the Mountain Air". Now thats a strap-line!!
there are 10 types of people in the world. Those that understand ternary, those that don't and those that think this a joke about the binary system.
Top

Beverley Bros. had one pub in Leeds, the Railway Tavern, Upper Cross Street. Beverley’s bought the premises when it came up for sale in 1875 [after the death of one of the Mortgagees].It remained their only premises in the city until they surrendered the license in 1941.The surrender of the license was another “horse trading” event on the part of the Licensing Justices, only in this case, it wasn’t in the favour of Beverley Bros.The license was traded in favour of the Woodman at Headingley which, at the time was a Kirkstall Brewery beer house. The surrender of the Railway’s license meant that the Justices upgraded the Woodman to a Full On, Publican’s License.The only reason I can think for this happening is possibly Beverley’s pinning their hopes on [or mabe being promised] first dibs on the new pub planned as part of the Saxton Gardens redevelopment.Sadly, the new Railway Tavern never got to the bricks and mortar stage and Beverley’s lost their toe-hold pub in LeedsLeodis had a photo of the proposed premises.http://www.leodis.net/display.aspx?reso ... SPLAY=FULL
http://www.flickr.com/photos/liits/
Top

Jogon wrote: Seen this old advert on sl flickrIntrigued as to what it was and who's it was.It's an ad painted on an end terrace shop'Stanley Road 1972'http://www.flickr.com/photos/rig7/8444359937/What was the beer and who did it?Sounds like something for the returnees from Boer then 1st WW http://goo.gl/maps/t1BueThe shop as it appears today.
Young 'uns that have no interest in the history of the place they grew up in....disgraceful.
Top

I'd give anything to go back in time and walk around Leeds...
Young 'uns that have no interest in the history of the place they grew up in....disgraceful.
Top

Phallica2000 wrote: I'd give anything to go back in time and walk around Leeds... How far back Phallica?
Daft I call it - What's for tea Ma?
Top

For me it would be the late nineteen fiftys.
No matter were i end my days im an Hunslet lad with Hunslet ways.
Top

tilly wrote: For me it would be the late nineteen fiftys. It would be great to time travel back to even just then to photograph things that rarely, if ever, got photographed then and which now have little photographic record.
A rainbow is a ribbon that Nature puts on when she washes her hair.
Top
Post Reply
16 posts