What is it and Where?

What is it and Where?

No prizes if you are correct. So what is it, correct name please and where is it located. 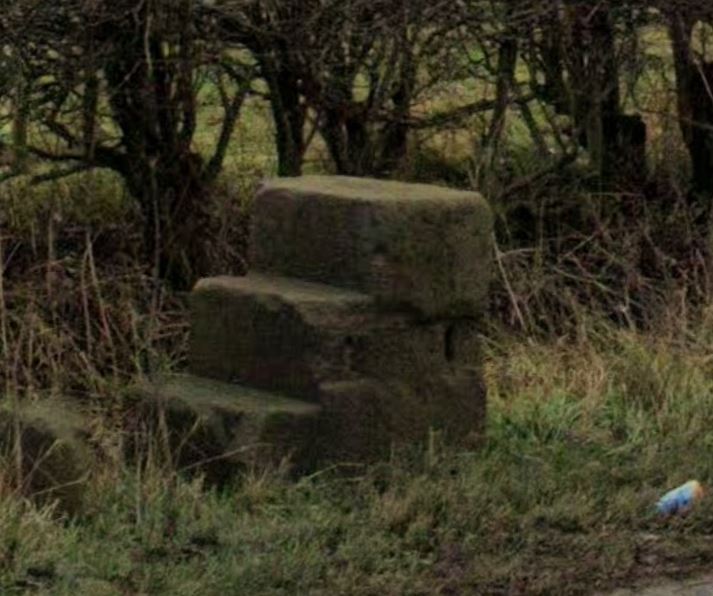 Don't know where it is, but it's a mounting block for getting on or off horseback. There is another in Regent Court, off the East side of Lower Briggate. I'm looking at a photo of that one as I sit here.
Top

I was surprised as to its location as I had never noticed it before, on my 1914 map it shows that there is a milestone in its location.
Is this the end of the story ...or the beginning of a legend?
Top

I didn't see this till after it had been identified as a mounting block but I don't think it's an obscure or unusual feature. A quick look on leodis suggests there have been several even in central Leeds eg outside older pubs. Stately homes etc sometimes have something posher eg with two sets of steps and more accurate stonework.

There are or were a couple in Armley Park, presumably dating from the time of Benjamin Gott in the form of a large stone cube with a foot hole in the face. When I was a child living nearby I had no idea what they were and I've only worked it out more recently.

Anyway, may we ask where this one is? I presume from the background it's somewhere out in the sticks.
Top

JMA: It is in very obscure location between Old Bramhope and Leeds Bradford Airport. A couple of hundred yards past Otley Old Road it sits at the side of the road, I cannot see any reason why it should be placed there and strangely I have never noticed it before. It may have been because I was behind a 30mph Sunday Driver that it caught my attention.

Doing a backward search on Google Street View it wasn't there in 2012 yet appears in 2018, so it seems obvious that someone has placed it there, maybe even stolen and dumped at the side of the road. If it's flytipping it makes a change from worn-out car tyres and old fridges.
Top

The mounting block on the road outside my garden in Guiseley was "removed" a few years ago. I always wondered who might have nicked it and why. I was cross that it had been stolen, even though it wasn't on my property. Perhaps the one pictured is it.
Top

It appears to be a regular haunt for the Google street view vehicle. Northbound it was up there in June, September and November 2012 followed by a near 6 year gap until May 18 and then April 19. Southbound it has images from September 2014, April and October 15, June 17, July 18 and then December just gone. The earliest the Mounting block are shown is May 2018 but it does look like the grass has been cleared in almost the exact position back in the next earlier, June 2017, possibly in anticipation of its arrival https://goo.gl/maps/LdDVZf8AnirzEmyD8 I suppose it depends on brightness when photoed but the stone looks lighter by April 19 https://goo.gl/maps/FVR22ziYD5SEzEPu5
living a stones throw from the Leeds MDC border at Lofthousehttp://tykebhoy.wordpress.com/
Top

I think I've got my Norths and Souths mixed up above. Also of note though is that in Buffaloskinners snaps the steps are on the Otley Old Road junction side as they are in Streetview from December but in May and July 18 and April 19 they are on the far side from the junction meaning as well as mysteriously arrivinf it was also rotated between April 19 and December 20.
living a stones throw from the Leeds MDC border at Lofthousehttp://tykebhoy.wordpress.com/
Top

It's still a conundrum about why it's there.

If the resting place was prepared, that suggests a planned purpose, but there's no obvious reason for anybody to facilitate mounting or dismounting from horses at that spot.

If it was intended as a pedestal for something else - eg like old millstones being used to mount place name signs - somebody is taking a while to finish the job and it's facing the wrong way for a sign.

The fact that the grass needed clearing first suggests it's not been placed to deter parking on the verge, although if a vehicle were to hit it, the occupants would know about it.

There's probably a simple explanation, but not simple enough for me.
Top
Post Reply
10 posts • Page 1 of 1