Football related- can anyone help?

Football related- can anyone help?

If I can manage to attach a photo, I was hoping someone would have an idea of the occasion. It was among family photos, and wasn't a postcard format.
If the photo needs reorientation, could someone help, as I've not been successful attaching this previously. Many thanks. 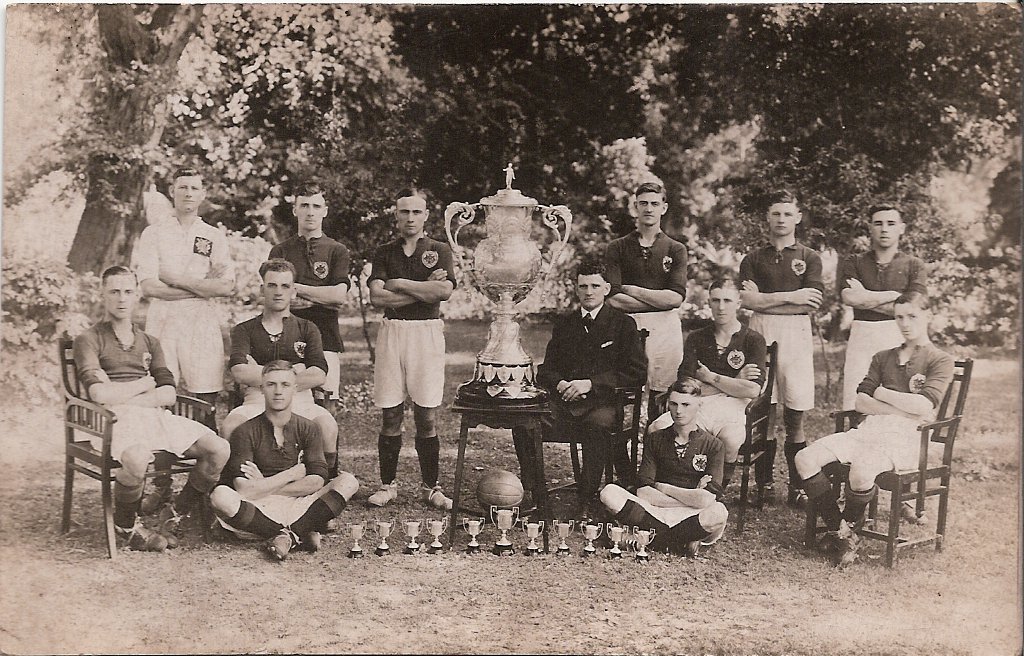 Thank you. No idea what I was doing wrong.
Top

Sorry that I cannot help you urban rambler but I hope you find out. It's certainly a very impressive trophy.
A rainbow is a ribbon that Nature puts on when she washes her hair.
Top

Like Leodian, little of any use to add. I agree it is an impressive trophy and given there are almost certainly 12 or 13 shields on the vertical part of the base and a further 2 on the almost horizontal slope of the base then it had been won 13 or 14 times before. A bit hard to date but given the one suit present and the lace up collars I'd suspect very early 20th Century rather than 19th but it is very much a guess.
living a stones throw from the Leeds MDC border at Lofthousehttp://tykebhoy.wordpress.com/
Top

The football itself looks very similar to the one pictured on the website at the link below. According to that site this type of ball was common until 1900.
http://soccerballscollection.com/SOCCER ... ISTORY.htm
The older I get, the better I was.
Top

urban rambler wrote: ↑
Sat 04 May, 2019 8:13 pm
If I can manage to attach a photo, I was hoping someone would have an idea of the occasion. It was among family photos, and wasn't a postcard format.

I've solved part of the puzzle of your image - the trophy.
Need more details from you to resolve which team it is & what year.

Done a lot of research on the early days of association football for the Burley Archive - Burley in Wharfedale football history upto 1940
What struck me about your image was how "professional" the 12 players looked compared to the ones I'm more used to looking at. Clean shaven, neat haircuts, clean strip, badges on their shirts (bar one on the back row) & a well turned out manager.
The setting of the photo is unusual - it looks like someone's garden, no building, football stand or goal post anywhere in view.
Then there's the trophy - wow that is something else! And the miniature ones spread across the front.

Finding the trophy was relatively easy - something that size wouldn't go unnoticed by newspapers at anytime in the past. But conversely the size of the trophy or how elaborate it is, rarely seems to relate to the importance of the competition.

Did a Google image search on - old football trophies 1902, then filtered on B&W images. Then added "Yorkshire" as you said the image was in family photos. A few rows down saw the trophy with - "Durham County Cricket Club - Durham.gov.uk Lahore Trades Cup". Although the link didn't work - did a search on Lahore Trades Cup.

The Lahore Trades Cup has gone by several names in the past, it was originally called the "All India Inter-Regimental Football Cup", was made in Sheffield in 1907 & cost £150.00 and presented to Lahore Traders in what is now Pakistan. In that year 19 regiments entered the competition.
(Other names include the Lahore Traders Challenge Cup & Lahore Trades Tournament Cup).

From the British Newspaper Archive - Army & Navy Gazette:
1909 The trophy was won by the 2nd Battalion North Staffordshire Regiment.
1910 & 1911 The Lancashire Fusiliers.
1925 possibly 2nd Battalion Sherwood Foresters
Yet to find details of who won it between 1911 and 1925/1926.

Its now on display at the Palace Green Library, part of Durham University
https://www.dur.ac.uk/palace.green/dli/faqs/
"Visitors can see old favourites such as the Durham Light Infantry Cup (known as the Lahore Trades Cup and once said to be the largest football trophy in the world)".

By contacting the Durham Light Infantry Trustees (owners of the cup) and/or the Palace Green Library ([email protected]) it might be possible to match up the orientation of the trophy in your photo, with how the trophy is now & work out which miniature shields are the two on the lower tier of the trophy i.e. the latest two winners when the photo was taken. These shields are likely to have the name of the regiment plus the year.

If you can work out which of your relatives was in the army, & which regiment they were in that had tours of duty in India (including what is now Pakistan) between 1912 & 1925, it might be the case that your relative is in the photo.
https://burleycommunitylibrary.weebly.c ... chive.html
Top

That fits with my records. My grandfather was serving in India with KOYLI (Royal Fusiliers?) From enrolment in 1919 to 1928 then in reserve to 1931., The family photos it was with were of him with his regiment, but the lack of military uniform in this photo gave me the impression this was just a red herring so I did not mention it. I very much appreciate your efforts. He was a special man, reenlisting in 1939 as part of the british expeditionary force later rescued from Dunkirk, serving through to 1945 when he was again transered to the reserves.
Top

KOYLI is the King's Own Yorkshire Light Infantry. They've got a regimental museum in Doncaster: http://www.doncaster.gov.uk/services/cu ... try-museum
Top

urban rambler wrote: ↑
Thu 20 Jun, 2019 6:46 pm
That fits with my records. My grandfather was serving in India with KOYLI (Royal Fusiliers?) From enrolment in 1919 to 1928 then in reserve to 1931., The family photos it was with were of him with his regiment, but the lack of military uniform in this photo gave me the impression this was just a red herring so I did not mention it. I very much appreciate your efforts.

That's excellent, so I take it from your reply that your grandfather is in the photo?

I'd still like to know what year the trophy was won & if possible where the photo was taken.
Have you emailed the Palace Green Library [email protected] with your photo & found out anything more about the trophy winners?

"mhoulden" has provided a link to the website of the Doncaster museum - but when you drill down to the contacts, it talks of a 4 week delay in requests for information.
I suggest going via the Rifles Light Infantry & KOYLI Association email: [email protected] & use them to find out more from the museum - attach the photo & see how you get on.
https://burleycommunitylibrary.weebly.c ... chive.html
Top
Post Reply
10 posts • Page 1 of 1