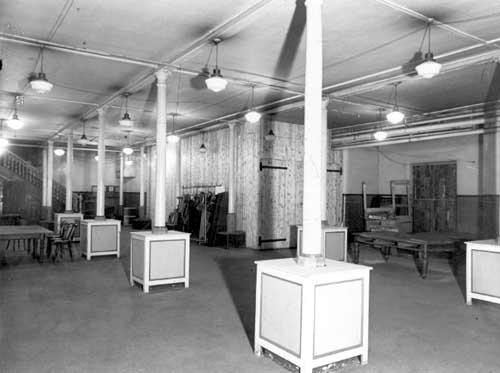 Hey would you look at that. Hows that for service. What's it like down there these days munki? Is there any trace of any of this left?
A fool spends his entire life digging a hole for himself.A wise man knows when it's time to stop!(phill.d 2010)http://flickr.com/photos/phill_dvsn/
Top

& literally as it is today, The Crypt (looking not too different, apart from a slightly lower ceiling). Great stuff munki. I'll add some of this war stuff on my town hall story later. Right now i gotta go out to photograph a pair of ugly skulls! I wonder if they have names??
A fool spends his entire life digging a hole for himself.A wise man knows when it's time to stop!(phill.d 2010)http://flickr.com/photos/phill_dvsn/
Top

& as for the air raid... I believe there was no direct hit on the Town Hall. The bomb mentioned landed in the middle of the Headrow & the blast did considerable damage to the museum, less to the Town Hall.Although, as this picture clearly shows, one of the lions was broken in half by the force of the blast & had to be put back together again. The bomb also damaged the large statue of Queen Victoria which was outside the South East corner of the Town Hall. The statue was moved (maybe after the bomb, maybe at a later date to accomodate the widening of the Headrow), & can now be seen next to the Library pub at the corner of Hyde Park.
'Are we surprised that men perish, when monuments themselves decay? For death comes even to stones and the names they bear.' - Ausonius.
Top

Bramley4woods wrote: dazzel wrote: hi guys and girls,,,,,great site. moved to jersey from leeds 12 years ago , but as they say -you can take the lad from the north, but you cant take the north outta the lad

.....R.E what was on town hall site?..i can reme being in the art gallery as a boy with school.in there is an oil on canvas titled "The Mute Hall" (at least i think that was the title).anyway i seem to reme the curator telling the group that the Mute Hall was the 1st town hall and it was on the site of the present hall,,,,like i said ,its a long time ago but maybe worth checking out...     The Moot Hall was at the top of Briggate. It fulfilled some similar functions to the Town Hall over the years, Court, Council Meetings etc.It wasn't on the Town Hall siteStuff on here about it :http://www.leeds.gov.uk/discover/discov ... _591381252 I was told the previous owner of the land where the Town Hall now stands belonged to a Doctor, I don't know if he had his practice their or just his home or a combination of both.
Top

I see in the paper that there are more tours of the Town Hall this month includuding a chance to see the Christmas lights from above, refers you to the Leeds CC website for details and booking info - but the what's on bit of the wfbsite seems to be broken at the moment.
Emial:    [email protected]: [email protected]
Top

Thank you for the pictures of Leeds Town HallGreat to see as I now live 12,000 miles away I think the sitr is a greatidea I used to live in Armley as a boy is there anything on Armley?Thanks Lyndoch
Top
Post Reply
169 posts