Hi TABBYCAT I was working at the Wortley Branch at the time so yes the BR contract was on the go then.We sometimes finished early so if i was local it could be three in the morning when i was driving home they came to see me at work i must say it was a bit of a shock at the time me being squeaky clean or nearly.
No matter were i end my days im an Hunslet lad with Hunslet ways.
Top

Seems his death was registered twice, any ideas why? There was only one John Riley born 10th Oct 1937
according to the 1939 register 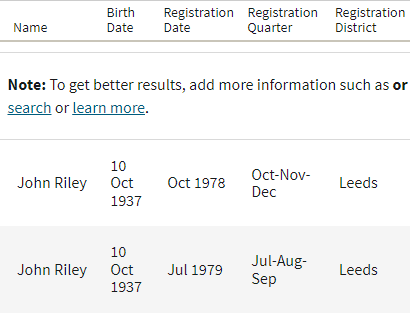 The date of the death was 27/28 October 1978. The death may have been registered shortly afterwards. There would probably have been an inquest opened for the purpose of identification, cause of death and if anyone was to be charged in connection with the death and then the inquest adjourned to a later date for further enquiries. This is normal procedure.

The inquest would have been re-opened at a later date, after enquiries made, and if anyone had been charged with an offence connected to the death. There may have been a criminal court case and some person/persons convicted or acquitted of an offence connected to the death. At the this final inquest, the Coroner (possibly after a Coroner's Jury's decision) would then give a verdict as to the cause of death and the records updated.

I might be wrong but that is all I can think of as to the two dates recorded for the same death.

There is an ex police officer called Raymond Harvey who may or may not be a member of Secret Leeds and he may see this thread. For several years, he was the Coroner's Officer in Leeds and would be able to give more precise details than me. Mick (JMA) may have contact with him as he is of a similar age and I think that they went to school together. I may be able to get in touch with Raymond. If I can, I will ask him to comment.

Addendum: I have sent a Facebook private message to Raymond about this topic and I hope that he will reply to me and/or post on this thread.
Top

I can't help with contacting Raymond Harvey. Sadly, the only ex-coroner's officer I had any contact with after retirement was Neville Oughtibridge who lived nearby but died a couple of years ago.
Top

1. I have had no reply from Raymond Harvey.

2. I have received a reply, today, from West Yorkshire Police via the 'What Do They Know' website. It states that a J Riley was murdered on 27/10/1978 and a person was convicted of murder. There are no further details of who committed the offence or where it was committed. I might make further enquiries and if I get further information then I will update the post.

Ian, thanks for following this up and keeping us informed.
BP
It used to be said that the statue of the Black Prince had been placed in City Square , near the station, pointing South to tell all the southerners who've just got off the train to b****r off back down south!
Top

As Ian will know, the key to finding anything much in police records will be the name of the defendant, the "ganiff" in the Leeds City Police jargon. I'd be surprised if a murder file were to be destroyed but there have been some big clearouts of paper files over the years. As chief constable of the newly amalgamated force post 1974, the late Ronald Gregory lit some truly huge November 5 bonfires at Oulton Hall which was then just about derelict but in a doomed project to be a new force HQ. I worked for a while in "Organisation" (Disorganisation to some wise guys) where policies were considered and the disposal of confidential waste was one. I've a feeling that in addition to problems with things like the fire risk and vermin, Gregory was keen to scrap anything which was a reminder of the history of the constituent forces. Closing premises and moving departments to new ones is another occasion when a clear out might be expedient. Brotherton House and Bishopgarth are examples coming to mind.

This murder does not sound to have involved a lot of inquiries - a "straight race" perhaps, in more LCP jargon, so not many people will have worked directly on it, and nobody outside Chap. I think Len Bradley (DCI) and Roy Pickup (DI) were the senior detectives at Chap at that time. I think Len moved on to become the head of Lincolnshire CID and I know nothing about Roy. I can't remember any of the detective sergeants.

I should have thought that HM Coroners' records would include sufficient detail to identify the person convicted of the murder and it shouldn't involve a huge search with the date already identified but I don't know their attitude to info requests.

The only other thing I can think of is local newspapers. I see that 1978 seems not to be online yet but somebody most hold a paper archive and the dates seem quite specific.
Top

It's been a long time since I heard the old Yiddish expression Ganiff/Gonif used and I wasn't aware that the Leeds Police used it too, we learn something new every day.

To use another word of Hebrew origin, ganiff is a shibboleth for membership of Leeds City Police. Or at least, I've never heard any police outside the pre-1974 Leeds boundaries use it.
Top

I thought there was some uncertainty about the exact location of the crime scene because this was the first reference I came across
"Riley‟s last volume of poems to be published in his lifetime was That is Today (Pig Press 1978) before he was murdered by two muggers outside a pub in the Chapel Allerton area of Leeds on 27th Oct. of that year.
That's why I was surprised when other sources identified the Oakwood clock location, A book written about murdered poets in 2015 put much more emphasis on the location being near the unsavoury toilet block rather than a pub.

A couple of other biographical points
J Riley got married in 1973. His wife eventually gifted his papers to the University.
He converted to Russian Orthodox religion shortly before his death. I also read that his death was commemorated by a day of mourning in Greece.

I don't want to start a conspiracy theory but I wonder if the paucity of information surrounding his murder and the subsequent trial could point to a cover up. He spent 2 years national service in Germany with the RAF during which time he learnt Russian. He would have done the intensive Russian course with the Joint Services School of Linguists, JSSL. Some JSSL graduates went back to their service units to work as translators or communications specialists ( think Bletchley Park or GCHQ), some went into the diplomatic service, and others became spies, for our Secret Service (MI6 &/or MI5), and in a very few cases for the USSR. There is a possibility that he may have continued to have some link with the intelligence services. Very speculative and tenuous I know!
It used to be said that the statue of the Black Prince had been placed in City Square , near the station, pointing South to tell all the southerners who've just got off the train to b****r off back down south!
Top
Post Reply
45 posts