Hi there I'm just wondering if anyone can remember where I read that when George Street (one next to market) was being dug up they apparently found loads of wooden coffins from an early cholera outbreak. I may have read it in Thoresbys ducatus or diary but I forget anyone else remember this?
I am aware that the old house of recovery is in front of this site but this was reported before iirc it was built.
Top

I don't know the answer to your question but while waiting for somebody who does, I've missed the significance here of coffins, especially wooden coffins. I'd have thought they'd be the normal thing for burying dead bodies, whatever the cause of death.
Top

I remember a grave stone on the other side of the road from the coal stays on Hunslet Moor where Cholera victim's were buried.They were dug up and re buried in one of the Leeds cemetery's it could have been Harehills i could be wrong about the cemetery, there must have been many sites around Leeds has it cost the life's of hundreds of people in Leeds.
No matter were i end my days im an Hunslet lad with Hunslet ways.
Top

My five times Great Grandparents William and Hannah Ramskill died from Cholera in 1854 and are both buried in an unmarked grave at St Oswalds in Methley. However I don't know what type of coffin they were buried in. 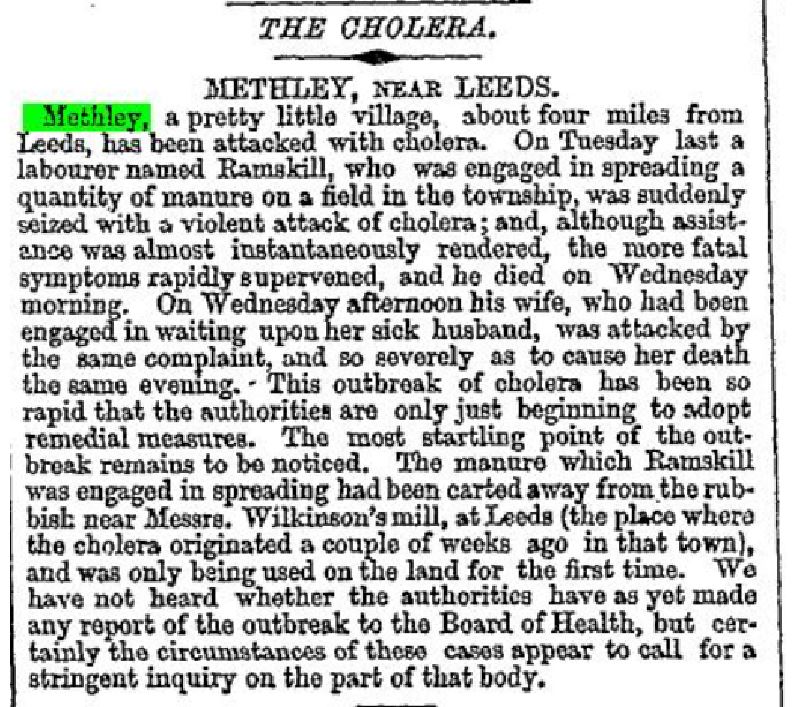 tilly wrote: ↑
Sat 01 May, 2021 3:54 pm
I remember a grave stone on the other side of the road from the coal stays on Hunslet Moor where Cholera victim's were buried.They were dug up and re buried in one of the Leeds cemetery's it could have been Harehills i could be wrong about the cemetery, there must have been many sites around Leeds has it cost the life's of hundreds of people in Leeds.

Hi Tilly, I found the cholera headstone from Hunslet Moor in the Hunslet cemetery see link:

Hi Bill thank you for your post glad you found the head stone we used to walk past it on the way to Miggy Woods.I remember the trams did a right turn on the way up very near that head stone, happy days i will never forget if it was the right time of the year we would come back with rhubarb from farmer Wards fields Walking at the side of the tram tracks past Parkside rugby ground making for the fountain on Hunslet Moor to have a drink before going home.
No matter were i end my days im an Hunslet lad with Hunslet ways.
Top

When I started at Dewsbury Road Police Station, that memorial was still in place on my beat

Although the memorial stone was moved to the nearby cemetery, it may well be that the buried remains were not buried elsewhere. I just don't know, but that would take up more space in already often over-crowded graveyards. Bear in mind also that a century on, there are often no descendants to be involved.

I've only had direct experience of one burial ground being cleared at that was on Upper Wortley Road in around 1974. The work was all behind big screens and part of the contract required that once a grave was opened, work on it had to be completed that day. All human remains were taken to Cottingley Crematorium on the day they were dug up and cremated with a simple religious service
Top

Though not about the graves of cholera victims the following extract about cholera epidemics in Leeds is taken from the 'Annals of Leeds and the Surrounding District' compiled by John Mayhall covering to the end of 1859 and published in 1860 (parts I’ve omitted from the book’s text are shown by the ....).

In an 1832 section it states “Cholera – This year was signalised in the history of England by the visitation of that awful scourge the Asiatic cholera....The first case that occurred in Leeds, was on the 26th of May, and the victim was an Irish boy named Dock, about two years old, residing with his parents in the Blue Bell fold, at the Bank....A child named Tobin died on the same fold the next day, and about eleven others were shortly after attacked in the same yard and its vicinity. The disease then made rapid progress, notwithstanding that every precaution had been taken by the local board of health by the removal of nuisances, &c.”

A table having the number of cases deaths and recoveries each month to November 12th were then given and following that it states “there were, in the borough, during the whole period of the disease, 1,817 cases; 702 deaths, and 1,115 recoveries”.

Quoting from a reported valuable statistical report it then states “the dreadful disease was most prevalent in those parts of the town which were situate in the vicinage of the river, or large water courses. That of 1817 cases reported to the Leeds board of health, 1,448 occurred in the township of Leeds, and 369 in the out-townships....The greatest number of deaths in one day, was on the 16th of August, when there were 59 cases and 21 deaths....The establishment of the cholera hospital in St. Peter’s square, gave great dissatisfaction to the inhabitants and owners of property in the neighbourhood, who manifested their feeling by breaking the windows of the hospital, and annoying the medical men and others. This place being inadequate, some property at the top of Saxton-lane was purchased for £550 and converted into an hospital.”

In a September 1834 section it states“At the beginning of this month, the cholera made its appearance in the Leeds workhouse, four or five of the inmates having been attacked with the disease at the same time; up to the 5th three cases had proved fatal; and in the evening of that day Mr. Rawling, the master of the workhouse was attacked with so much virulence, that he expired on the following day. On Sunday, the 7th, five cases proved fatal, and up to Saturday, the 13th of September, there had been thirty-five cases, out of which number, fourteen had terminated in death.”

In a report about an outbreak of cholera in 1849 it states “The first case in Leeds occurred on the 12th of June....The disease then spread rapidly until September, when it began to diminish. It entirely disappeared about the middle of October. The total deaths from cholera and diarrhea in the township of Leeds during the four months amounted to 1,674; the proportion of cases of cholera to diarrhea, being about five to one. The disease was most prevalent in Marsh-lane, York-street, Quarry-hill, Newtown, Leylands and New-road-end. It was singularly fatal to a family of the name of Craven, in Cavalier-street, no less than eight deaths having occurred in that family alone. In the borough of Leeds, the total deaths considerably exceeded 2,000.”
A rainbow is a ribbon that Nature puts on when she washes her hair.
Top

In view of buffaloskinner's post on Sat May 01, 2021 3:16 pm I've just looked up the 1854 section on John Mayhall's book and have extracted the following section (it was not listed under cholera in the index which is why I did not readily see it).

"About the end of February and during the month of March, considerable alarm was created in Leeds by the appearance of the cholera. Up to the 10th of March there had been altogether forty cases of which fifteen proved fatal, and all the persons affected except five, were employed at the flax mills of Messrs. Wilkinson, Hunslet....though they stoutly maintained that the cause was exterior to their premises, and for which they were not responsible. The disease appeared at Castleford in a frightful form, and several deaths occurred."
A rainbow is a ribbon that Nature puts on when she washes her hair.
Top

The House of Recovery was on Vicar Lane, next to Fish Street.

There were indeed burials at the corner of Harewood Street/ George Street junction as they were excavated when the original redevelopment of the site was going to happen about 10+ years ago? Not sure of the coffin status or what else people would have been buried in but I understand that some cholera victims were buried in lead? coffins or something other than wood to help contain any spread of the disease.

I have some pics somewhere of the excavations, will dig them out and post.
Top
Post Reply
10 posts • Page 1 of 1