A research project by Leeds Beckett students in the School of Cultural Studies and Humanities.

https://www.leedsbeckett.ac.uk/school-o ... eds-blitz/
Is this the end of the story ...or the beginning of a legend?
Top

Thanks for the link buffaloskinner

I recall my mum telling me she answered the door one day to a sister in law. She lived in Armley and said though her home was not bombed some nearby sites had been and she had then gone to my mums home in Osmondthorpe to let her know she was OK but rather shaken up with the bombing so near. I would guess therefore that the event was probably during the 14 March 1941 bombing raid.

The following link to some information on WW2 in Leeds in a My Learning website may be of interest https://www.mylearning.org/stories/leed ... -war-2/971
A rainbow is a ribbon that Nature puts on when she washes her hair.
Top

The important thing which is so often overlooked is the way women took over what had been considered men's jobs including wartime production of every sort for little recognition.

My mother was an air raid warden in the early part of the war when she was 19. She was posted to the ARP station on Armley Road where it turns sharply to cross the railway. She was issued with various warning instruments including a big wooden rattle which we used to play with after the war. There was a different warning for each type of air raid. She used to stand in the dark waiting to raise the appropriate alarm, but worried that in the case of a poison gas raid, she might be overcome by the gas before she had chance to sound a warning. AFAIK, gas was not used in WWII in the way it had been in WW1. There were houses damaged in an air raid in the nearby Gloucesters but I don't think she was there that night, although she spoke of being able to see incendiary bomb fires.

For most of the war she worked at Thorpe Arch bomb factory but not on production. As her normal job had been in a shop she was put on the cash register in the canteen. She worked shifts which involved a tram from Armley into Leeds then a train to Thorpe Arch.
Top

My grandparents were bombed out in August 1940, they lived in Robinson Place, Whitehall Road where Dunhelm now stands. The Germans may have been trying to bomb the railway which is close by. Whitehall Road is at the back of the buildings.

Below is a picture which is also on Leodis which is incorrectly documented by them. My grandparents house was the white one in the middle. 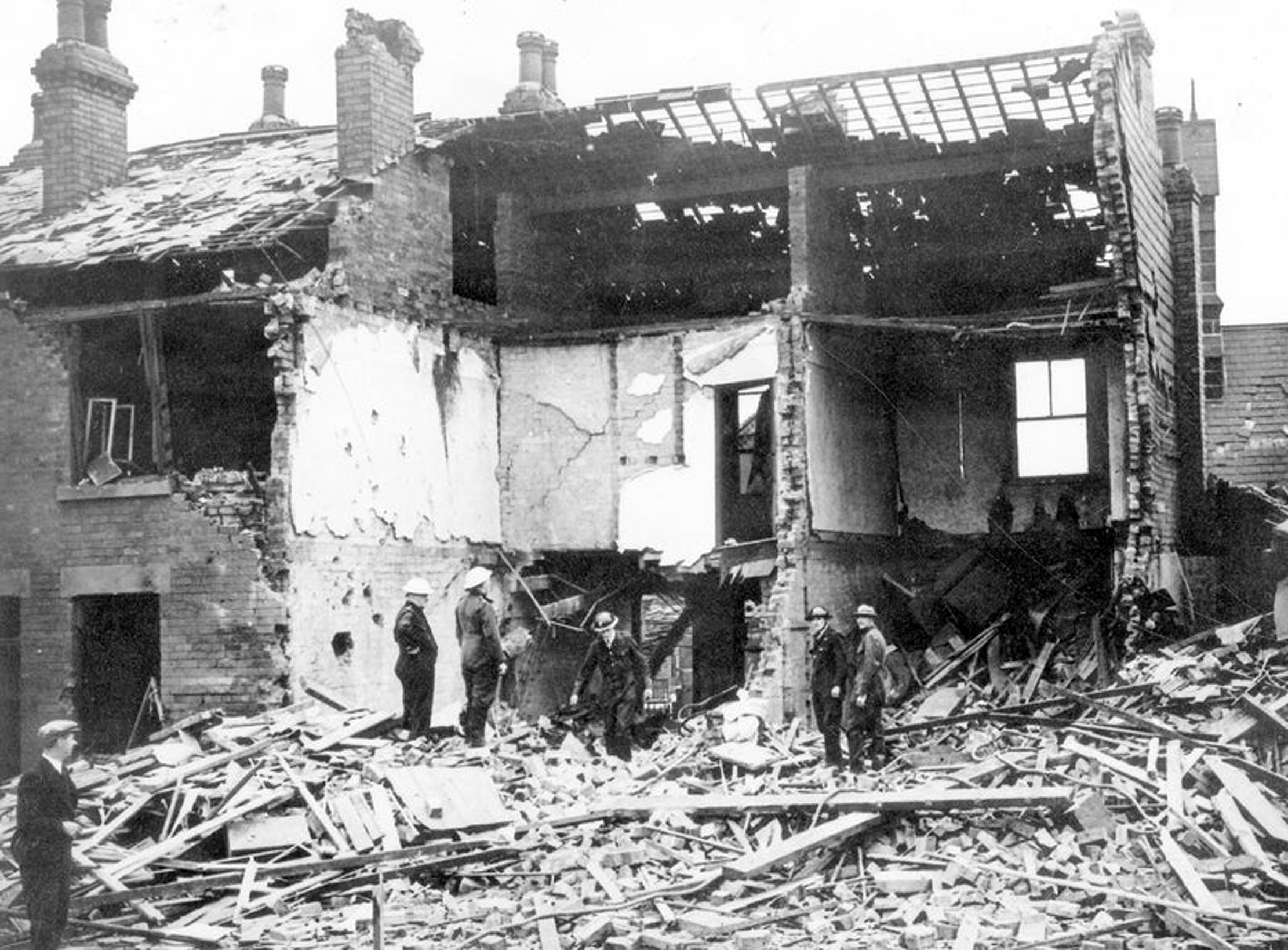 There were loads of industrial premises near there eg Monkbridge Forge, "Soapy Joe's" which produced a lot of war materials in WW1 and probably WWII, Fairburn Lawson, Greenwood and Batley, Crabtrees, then the whole of Hunslet a bit further along the river which was presumably used for navigation. With Kirkstall Forge etc in the other direction. And more I've missed out.
Top

When i first went to Mount St. Marys school, Richmond Hill in 1944 there was only one area to play football and that was known as "Old Park which had railing round it (which was rare in the early 1940s.) the surface was just rough sort of grit but about the middle was an area that had been a large hole and was filled in rough half bricks etc. where Saxton Gardens is now there was something similar Our Teacher told us that theseholeswere caused by attemps to damage the Marsh lane section of the railway. The "Bank" area had been slum cleared and only our school and church buildings were still standing. He remarked that the school windows had been blown out at this time.
Not sure if Joseph Watsons (Soapy Joes) did much for the War Effort but it is possible as many factorys were redirected from their normal productions to help.
Top

Bombs also fell on Beeston, a couple in Cross Flatts park too although missing from the bomb map.
As kids we used to play in the remains of this house in Flaxton Terrace.
Picture courtesy of Leodis. The old Woodpecker pub had blast damage on the front wall due to fragments from a bomb i was told they had tried to hit the gas holders over the road at the side of Quarry Hill flats.
No matter were i end my days im an Hunslet lad with Hunslet ways.
Top
Post Reply
9 posts • Page 1 of 1