Nanny Beck in Alwoodley normally has a fairly placid flow. However, following the thawing of recent snow and then lots of rain the beck had a very strong fast flow on January 20 2021 that was much more than normal. I took some photos around 13:15 that day and have attached 3 of them. Getting some photos needed great care not to fall in as the ground by the beck was very muddy and very slippy! Though still impressive the flood scenes were however not as extensive as those on December 26 2015. 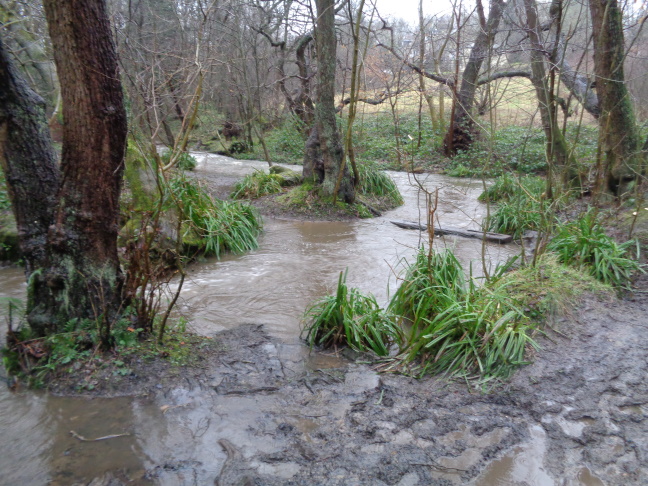 .
Thanks for your comment which is appreciated. I'm always unsure if I should post photos such as these in case they might be of little interest to anyone not knowing their locations.
A rainbow is a ribbon that Nature puts on when she washes her hair.
Top

Hi Leodian it was lovely to see the photos . I can't get to this part of Leeds and walk about as recovering from a broken leg just now. Enjoy seeing people's photos .
Top

I am familiar with this beck, but a bit further upstream. When I was fifteen years old in 1961, I started to play rugby in the Colts team at Moortown RUFC at Moss Valley, Far Moss, off The Avenue, Alwoodley. I played there for many years. At that time, the brick-built clubhouse and changing rooms were fairly small but adequate, and there were two rugby pitches infront of the clubhouse.

The beck (which I never knew was called ‘Nanny Beck’ until this post) ran from east to west, parallel with the main rugby pitch, and immediately next to and infront of the clubhouse. Access to the clubhouse was via a concrete bridge over the beck. A few years later, the teams were doing quite well on the rugby field and the club was on the verge of becoming a ‘senior club’ (which it never became). In their wisdom, looking to the future, the committee decided to extend the clubhouse. Instead of building a proper extension, to match the existing building, a timberframe type building was purchased as the club had little in the way of funds.

When this decision was made, it was decided that the club would ‘divert’ the beck from the front of the clubhouse to the rear of the clubhouse, and fill in the ditch for better access and parking.

I can’t remember if we did all the work ourselves or whether contractors were brought in but I remember attending working parties to divert the beck to the rear of the buildings.

Over the following years, parts of the original clubhouse were properly extended, squash courts were built (which nowadays are a gym) but the portakabin type building is still there.

With regard to my comment about a ‘senior club’, in those days there were no leagues, all games were ‘friendlies’ and there were only a couple of cup competitions (such as the Yorkshire Cup). Fixture lists were ‘set in stone’ (since the late 1800’s) and it was almost impossible to get a fixture with a ‘senior club’ other than in a cup competition or if there were cancelled fixtures – usually because of the weather e.g. frozen pitches. A few decades ago, a ‘league system’ was introduced to Rugby Union, region and country wide, which replaced the original club fixture lists.

The ‘senior clubs’ in our area at that time were Headingley, Otley, Sheffield, Bradford, Hull & East Riding, Halifax, Middlesborough, Wakefield and maybe a couple more. At that time, Roundhay were just ahead of Moortown in becoming a ‘senior club’ and were almost there. Moortown fell by the wayside and struggled for years, on and off the pitch but are doing better nowadays, thanks mainly to investment and enterprise by a local businessman who turned the club around. Roundhay and Headingley amalgamated to form Leeds RUFC and their grounds at Chandos Park and Kirkstall were sold to developers. The amalgamated club performed professionally at the highest level under various names but they are also heading down hill and are now in the third tier. Since that time, many of the senior clubs have also gone down hill and Wakefield went out of existence altogether. The amalgamated Headingley/Roundhay club has been called Leeds, Leeds Tykes, Leeds Carnegie, Yorkshire Carnegie and is now called Leeds Tykes again. The first team originally played at Headingley (Leeds Rhinos ground) but from now on, due to their demise and financial difficulties, are now to play at the ground of West Park Leeds at Bramhope, where the Leeds more junior teams played their games and where alot of the money went after the amalgamation of Headingley/Roundhay. The facilities there are first class with superb buildings and changing rooms and many, many pitches (including a plastic one).

Going back to ‘Nanny Beck’, I wondered how it got that name?
Top

Thanks for that very interesting post. I was particularly interested to hear that Nanny Beck had been slightly diverted for the clubhouse as I did not know that. Its length and course on quite old maps I've seen is also hard to discern.

As to your query why Nanny Beck is so named this link to a thread titled ‘Alwoodley Childhood’ started by Derek on November 7 2011 may be of interest. viewtopic.php?f=20&t=3461

In a post of mine in that on November 7 2011 I noted “I have tried to find out but have never been successful as to how Nanny Beck and Nanny Bridge got their name. Nanny Bridge is where the beck runs under King Lane next to the now demolished Alwoodley Motors site (where a Tesco Express is currently being rapidly built)”.

In a post by Derek on November 12 2011 he stated “As a child I knew Nanny Beck as "The Beck", and only discovered the proper name from an old map”.

In a post by Johnny39 on November 20 2011 he stated “...in the time I lived in Alwoodley I never heard the bridge referred to as Nanny Bridge”.

I have still been unable to find out how Nanny Beck and Nanny Bridge came to be so named.

PS. Off topic but it’s amazing to recall that Alwoodley Motors had already been demolished by at least November 2011