Where have all the Sparrows gone.

Where have all the Sparrows gone.

In the last 2 days my local bird population has disappeared. Sparrows, Tits, Pigeons. Magpies. I'm in Armley near top Town St. Anyone else noticed this?
'Eeh! That's thrown fat on t' fire'
Top

Not around here. I feed birds with peanuts and sunflower seeds and our garden - at Gildersome - is teeming with birds, especially house sparrows. I've not seen a greenfinch for several years and the goldfinches seem fewer this year but house sparrows are really plentiful. I saw a robin today, for the first time in a while and we have blackbirds, collared doves, pigeons and all the titmice. This year, we've had regular visits from Greater Spotted Woodpeckers. We've had at least one adult female, I suspect two, and a juvenile. I'm always cautios about double counting but our best year for woopeckers was 2008 when we had two adult males, one adult female and four juveniles all in the garden at once. Yesterday evening we had geese honking overhead at roof level, heading in the direction of the balancing reservoir on the Ring Road, where there are loads.

Ours is a titchy back garden: we aren't talking about Harewood House, which reminds me we see loads of raptors in the sky including Red Kites.
Top

Hello jma.
Not so many years ago when i was on my way to work about 6am. i used to see lots of sparrows on the grass verges but over the last few years they seem to have declined and luckily we have a large bushy tree in the front garden and since my missus has been hanging out feeders on the tree there has been a lot of "Spuggies" living and feeding there. they prefer the suet balls but the 3 feeders have to be filled nearly every day.we have just one robin plus the very young sparrows. We also have quite a few wood pigeons who mop up the falling bits. sadly we do have Magpies who seem to tour the area in pairs.
We are only a few mile from Slimbridge nature reserve where there is every bird, swans and ducks you could mention. some migrate there from thousands of miles away , like Russia for instance. If you are ever in the West Country it is well worth a visit.
Top

In our sparrow colony we have a pure white sparrow .This year the young have either white rump feathers or white covert feathers
Canging the subject - we have a black and white blackbird nesting on our hedge. 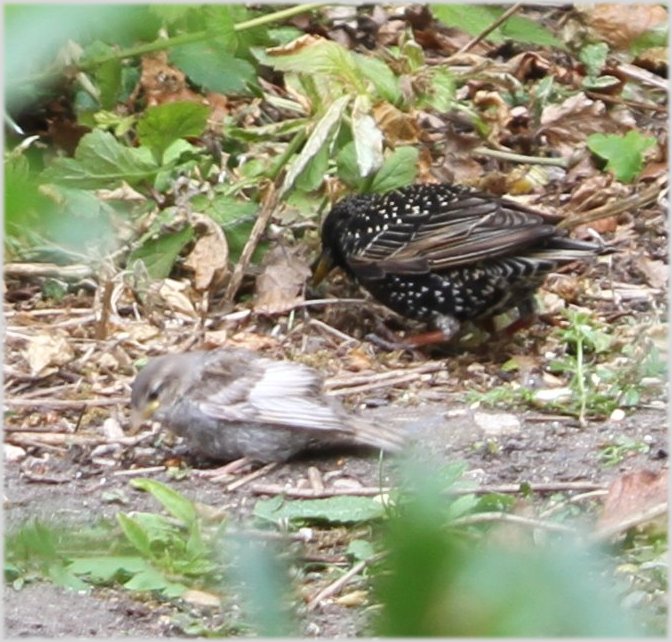 All good stuff there and I'm sorry to hear there was originally more of it.

I think the other bird in your top pic is a starling. I understand numbers have been falling. We get them occasionally in our garden but in nothing like the numbers.

A bit of good news is that the other evening my 8 year old granddaughter's attention was attracted by a lot of birds over their house in Gildersome.

Today, I've shown her some starling aerial displays - murmurations - on youtube and she has confirmed that that was what she had seen.
Top

Have read that roundabout August while it's warm sparrows are moulting their feathers very gradually so they keep hidden most of the time away from predators. At the moment I've not noticed any for a few weeks and usually see aprox 8/9 sparrows at any one time
Top

Talking about birds though they used to be common I've only rarely seen a thrush for a few years now.
A rainbow is a ribbon that Nature puts on when she washes her hair.
Top

We have sparrows i have seen has many as twenty some days none also five or six doves one or two wood pigeons sometimes a pied wagtail.One or two blackbirds we have had a racing pigeon come every day for the last four weeks i have started feeding it twice a day i was thinking it might not be able to fend for itself one bird i have not seen for years is a skylark i saw lots of them when i was a kid flying round and round singing and getting higher and higher.
No matter were i end my days im an Hunslet lad with Hunslet ways.
Top

Sorry to say that since we had new soffit boards and eave ends fitted a couple of years ago the house sparrows have disappeared as that’s where they used to nest. We still have a couple of sparrows coming into the garden but nowhere near as many as previously when they lived in the roof.
Starlings are regular visitors with 30-40 coming at a time, and will bring their young ones too. We have a couple of Blackbirds that come along with the occasional Blue Tits, for a couple of years we had some wrens nesting in our large Cordylines but they too have now gone. Wagtails are regular visitors along with a pair of Collared Doves.
There is a large family of 6 Magpies which come every day, and they do not bother any of the other birds, but are intimidating. We also have a couple of Wood Pigeons and the only ones I do not like are the common Pigeons which come for the scraps on the Birdtable.
Every so often we are visited by a Sparrow Hawk which seems to see our garden as a takeaway buffet for itself. The other ones I love to see are the Red Kites which are flying overhead every day, never land in the garden though.
Is this the end of the story ...or the beginning of a legend?
Top

I'm sometimes mystified by changes. We have greenbelt at the back which used to be properly farmed but is now only used for grazing horses. In previous years there have always been a lots of house martins which I assumed nested on the various farm buildings across the fields. They cannot successfully build nests under plastic soffits so some years ago I installed a double house martin nesting box. Unfortunately, no luck. Even worse, for some reason I've seen no house martins at the back at all this year.

The other day, I was at the other side of Gildersome and the sky over the fields towards Drighlington had loads of house martins.
Top
Post Reply
13 posts