I'm after a little help with a research project, if anyone can help me out?

I believe Detective Chief Supt Walter Young was the Regional crime squad Co-ordinator for Wakefield, (West Yorkshire Police) and that he served from about 1946 to 1976, or thereabouts.
I also believe that he was involved in the manhunt for the killer Neil Adamson in February 1970 and that he had Adamson corner at one point but that Adamson escaped after shooting at Supt Young with a saw-off shotgun!! Can anyone tell me any more about this incident?

Can anyone point me in the right direction for somewhere, that I can perhaps find out more about Supt Young?
I'm curious to know what other cases he was involved in during his career.
Do any photographs of him exist?
Top

Chief Superintendent Young was a member of Leeds City Police until amalgamation in 1974, when that force became what was then known as the West Yorkshire Metropolitan Police. I don't really know much more about him than that.

In 1970, Neil Adamson shot and murdered Inspector Barry Taylor of the West Yorkshire Constabulary, who was leading the police response to a burglar alarm at Sunnybank Mills, Farsley. Adamson escaped and there was a big and ultimately successful police operation to catch him. The Regional Crime Squads were formed to deal with serious crimes across police force boundaries so it's probable that Chief Superintendent Young was involved in that investigation, but I think Barry Taylor was the only police officer Adamson shot.

Barry Taylor was commemorated by a plaque at Pudsey Police Station.
Top

As previously mentioned he was a Chief Superintendent in the Leeds City Police. He was the Regional Co-ordinator of the No. 3 District Regional Crime Squad, which covered an area from the East Midlands (Nottinghamshire and Derbyshire) and covered all the Police Forces (County, City and Borough), east of the Pennines and up as far as (I think) the River Tees. Police Regional Crime Squads came into being around 1965, after the Police Act 1964. England and Wales was split up into ‘Districts’ and each district had a number. Regional Crime Squads came into being due to crimes being committed, not in one particular force area, but across the country by ‘travelling’ criminals. They were also formed to deal with serious crime and to help and support individual Police Forces when and where necessary. Some of the staff worked ‘under cover’ and much of their work was surveillance based.

I seem to remember that the north eastern Police Forces (e.g. Newcastle, Northumberland, Durham, etc.) were in No. 2 District. There were No. 3 District Regional Crime Squad Offices at Leeds, Nottingham and Sheffield (and possibly Hull). The Regional Crime Squad was staffed by members of the Police Forces in the District. The officers were seconded for a period of (usually) three years (flexible) and were part of what was called ‘Central Service’ and paid for by the Government as opposed to the individual forces. The head of all the Regional Crime Squads was called the ‘National Co-ordinator’ and was, I think, of Assistant Chief Constable rank and worked at New Scotland Yard.

In the 1960’s the Leeds Office of the No. 3 District Regional Crime Squad was based on the ground floor of the Leeds City Police Headquarters at Brotherton House, Westgate. In the 1970’s, it moved to the same building as the Traffic Department in Belle Vue Road. The staff, at the Leeds Office, were mainly from the Leeds City Police, the Bradford City Police and the West Riding Constabulary (at times, there may have been one or two officers from Hull/Humberside). The other offices in Sheffield and Nottingham were staffed by officers from nearby local forces. The Regional Co-ordinator covered all of the offices in No. 3 District and worked between all of the offices. He may have had his own office base at Wakefield, but I can’t remember. In 1967, some of the smaller Police Forces were amalgamated with other Forces (e.g. Huddersfield Borough Police and the West Riding Constabulary to form West Yorkshire Police) and again, very large amalgamations in 1974 (e.g. Leeds City Police, Bradford City Police and the West Yorkshire Police to form the West Yorkshire Metropolitan Police – in later years the ‘Metropolitan’ bit was dropped).

A quick check on Ancestry reveals that Walter Ruscoe (or Roscoe) Young was born in Wharfedale on 27/8/1918. He married Vera Wrigglesworth at Leeds in 1940. He died in Boston, Lincolnshire, on 25/6/2000 aged 81 years. He had two daughters who are probably still alive.

I can’t remember what happened to Walter after he left the Regional Crime Squad and I don’t know what year that was. I also don’t know when he retired from the Police Service. I seem to remember that during the early years of the Squad that Dennis Hoban (who I knew well) worked with him at the Leeds Office as a Detective Chief Inspector and possibly as a Detective Superintendent. I remember Dennis being transferred into the Traffic Department, as a Superintendent, for a very short period before he took over as head of the Leeds C.I.D. after Frank Midgeley. At this time, Jim Fryer was Dennis’s deputy, who was then replaced by Jim Hobson after Jim Fryer transferred to the Derbyshire Police, where he eventually became the Chief Constable before he died (he is buried in the cemetery at Meanwood Church). It was probably a case of Dennis’s secondment on the R.C.S. being over and there was no C.I.D. or Sub Divisional place for him. In those days, the head of the Leeds C.I.D., and all Sub Divisional Commanders, were Superintendents. In the 1970’s, these posts were upgraded to Chief Superintendents.

So far as relates to Neil George Adamson and the murders at Farsley on 15th February 1970, there was a previous topic where this was covered:

http://www.secretleeds.com/viewtopic.ph ... 6&start=10 (the link in the thread no longer works)

There is information about Adamson's arrest here:

I don’t think that I can add much more.

Gents, thank you ever so much for this information, it is of great interest!!! I assume there must be a picture of him somewhere, does West Yorkshire Police have a museum or archives that might have one?

Going back to the Adamson story, I have seen a small newspaper cutting which records the following.....

At 3 a.m Det Sgt Mike TURNER, Det Roger PUCKHAM and Supt Walter YOUNG saw a man moving in fields near Tong Road. They called to him "Drop it. You have had it. Don't be a bloody fool". But the man backed off into the darkness, jumped over a 5ft high wall and fired at the officers.

Not sure which newspaper this comes from, but it appears to be part of a larger article?
Top

There are a few results for Supt/Superintendent Young for Febuary 1970 in the British Newspaper Archive, it's free to register & you get 4 pages free \
https://www.britishnewspaperarchive.co. ... lse&page=0
Top

As far as I am aware, Mick Turner is still with us and could confirm the story. He was a Leeds officer and I worked with him in 1966 at Upper Wortley Police Station. The other officer was called Roger Buckham (now deceased) and he was a Bradford City Police Officer. I do seem to remember a story about Roger being shot at but I can't remember the circumstances or if it was connected with the Adamson case.

With regard to a photograph of Walter Young, I don't know of any. The West Yorkshire Police may have archives, particularly photographs from the many courses which were held at the West Yorkshire Training Centre at Bishopgarth, Wakefield (which has now been demolished). Most courses held there had class photographs taken. It is possible that some of the photograph albums have been moved to the new training school/headquarters at Carr Gate, Wakefield. Walter Young may appear on one as a student or as a speaker (I don't think that he ever worked on the staff there). The only other possibilities are his family or the Police Museum at Ripon. 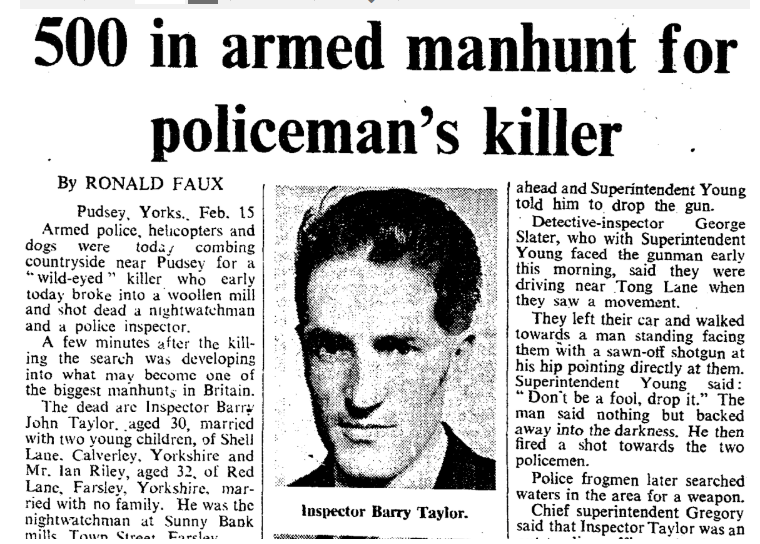 Many thanks indeed Gents, this information is GREATLY appreciated!!!!!
Top

The only way you will find what information West Yorkshire Police retains and is willing to disclose is by writing to them.

My own memory of the events surrounding the murder of Inspector Taylor is patchy. I was visiting my in-laws in Hertfordshire at the time and the crime made the national headlines. In those days, Farsley was in the West Riding ie not covered by Leeds City Police, but obviously, there was a massive initial response from the cities of Leeds and Bradford because they had more manpower on duty nearby and immediately available. My late brother was on night duty and was part of that response. I know from his and other accounts that it was initially chaotic. In those days, neither personal radios - Pye Pocketphones - used by the police nor the VHF radios in some police vehicles - not panda cars - were multi-channel, so there was no common system of communication for everybody who responded. Even within Leeds, uniformed officers from one police station could not communicate directly with another station. Also, personal radio coverage was poor in some areas so officers could not always communicate with their own station, even from blackspots on their own beat.

An armed police response was not easily organised in those days, although there were probably more officers who had experience of handling firearms during their military service. A mixed bag of firearms was issued to the officers who had responded

I understand that an improvised cordon was placed round the broad area where it was thought that the armed man might still be. IIRC, my brother who had been armed with some sort of service rifle was part of the cordon but at some stage was moved when it was being reorganised. He told me that the incident where the suspect was assumed to have broken through the cordon had been where he'd been before he was moved.

After amalgamation, I worked with several officers who had been with Inspector Taylor when he was leading the police response. These included the sergeant who took charge and the PC who attended to their fatally wounded colleague. None had much to say about the murder.

Uncle Mick posted the cutting while I was typing. I think the fact of a detective superintendent being part of the search - it's only on television where senior detectives routinely do that sort of thing - partly confirms what I'm saying about trying to get organised with poor radio communications: going out personally and giving instructions face-to-face is the only way, and a poor substitute for decent radio.
Top

I've found this picture of an armed Leeds City Police officer forming part of the cordon in daylight, presumably the following day. Note the bolt-action rifle. That's a Leeds City Police panda car. I don't recognise the officers in the picture or the location. I think it's fair to say that this manhunt led to a change in the arrangements for the police use of firearms.

It has occurred to me since I posted before that IIRC, in those days the Regional Crime Squads may have had the only vehicles with multi-channel radios because of their cross-force area. Mr Young will have been one of the few senior officers equipped to co-ordinate officers from several forces.
https://www.alamy.com/feb-16-1970-polic ... 62550.html
Top
Post Reply
40 posts