warringtonrhino wrote: Water wheels and corn mills, I have the script of the talk given by E KIlburn Scott, in 1933 'Old water-wheel at Seacroft Leeds'. I have a map which I was commisioned to produce, (but not paid) of the Manston Collieries 1866 -Beston Park Bed it covers the area from Killingbeck Lodge to Ellen pit in Garforth I'd be delighted to see these, If Chameleon would too perhaps he'll give you my email and have a look himself as they pass through him?.You should have a look at the Tithe maps - they are on the web, google leeds tithe maps projects. On them you will clearly see how the map indicated the Foundry Mill was fed by a leat from Rossgill not from the Wyke.On further research the puzzle is it shows what looks like a second leat from the wyke at easterly road that stops dead possibly as early as the rein, but the continuation of field boundaries often appears to make it look like it goes further on. Up to this point are fields numbers 452 (coal pit close) 452a (little coal pit close), and 454 (low coal pit close).The centre of that coal mining area is Asket Close today.The Bloomery would have run on a undershot waterwheel. Apparently bridge abutments were used to narrow the flow channel and speed the river. The weir on the wyke we see today is a meter or so away from a bridge that shows an older bridge and closer (making the gap narrow) abutments under.I may read it wrong but the weir, abutments and narrowed & straightened (by stone walling) beck indicates an undershot wheel just beyond the bridge.I'm sure a wheel powered Bloomery and a wheel powered Corn mill sat on the wyke. I'm sure the stonework in the wyke accomodated a wheel to which mill I don't know. The dead end leat shown on the Tithe map is a serious puzzle still.
Top

The Lordship of the Manor of Roundhay & Seacroft was up for auction in about 1997. From recollection it was one title, not Rhay + Scrft.Don't know if the attendant documentation would help or whether already covered. I will read this whole thread in due course, fascinating, Coal Rd, Foundry Appr etc.Ps why is Wykebeck 'Wyke'? Apols if dumb qn.
Top

warringtonrhino wrote: The leat started at Eastfield, the 1908 map shows Wyke beck, in its current location, with another stream heading in the general direction of Foxwood. There is a weir arranged so that the main flow of water is down the other stream, and Wyke beck gets the overflow. Why was the Wyke beck straightened? I have now gone onto old maps and for this area there is a great run of 1:2500 maps.Yes at Easterly road their is a weir typical of those that dam up the water to allow a strong volume/flow down a leat or mill race or mill goit as they are variously known.The weir discharges the overflow into the straightened Wyke beck and runs down to where I believe the old Foundry/Bloomery had a wheel on the beck up to around 1500.The map shows the leat with the main body of water pressing on and yes there is a flow arrow so it is a watercourse, however on the maps either side of 1900 the leat stops and discharges the water at right angles straight into the stream flowing down the Rein and back into Wyke beck.A mystery for me this. The water is clearly engineered for a mill but it all seems to just stop dead. The only explanation seems to me to be that Mathers Corn Mill was somewhere beyond the dead end we see on the c.1900 maps, and that what we do see on those maps is just remnants of a system that fell into disuse possible after the windmill was built?????We have other cornmills in Leeds and they do seem to be built right into the 1700's with undershot waterwheels. My conclusion after several days of reviewing everything and the tremendous new impetus from Rhino is the bloomery was on the straightened beck near cinder Hills and a corn mill was somewhere beyond the Rein stream.
Top

The parksider wrote''The map shows the leat with the main body of water pressing on and yes there is a flow arrow so it is a watercourse, however on the maps either side of 1900 the leat stops and discharges the water at right angles straight into the stream flowing down the Rein and back into Wyke beck.A mystery for me this. The water is clearly engineered for a mill but it all seems to just stop dead. The only explanation seems to me to be that Mathers Corn Mill was somewhere beyond the dead end we see on the c.1900 maps, and that what we do see on those maps is just remnants of a system that fell into disuse possible after the windmill was built?????''I agree, furthermore the watercourse west of Fox Wood, has a bank on the south west edge. So it is not simply a straightened beck, it has been moved up the valley slope, presumably to maintain a head of water for a mill.Downstream the double line turns east, becomes a single line and changes back to a double line just before it joins the foundry Mill feeder stream. The single line may be a narrow(er) watercourse, or a culverted water course, or an overgrown watecourse and a surveyor with new trousers he didn't want to damage. It may be that Foundry Corn mill was originally serviced by the Rosgill stream which was diverted from its route down the hill into wykebeck. The leat may have been a diversion of the wyke beck which supplimented the (diverted) Rosgill stream.Slightly Different Topic I believe bloomery ironmaking did not require permenant buildingsso when the work ceased, there would be no ruins, to plot on a map. Corn mills however are substantial buildings, and long after their useful life, ought to have some recordable evidence. There are no ruins, or maps showing ruins on the Wyke beck, does this mean there was never a corn mill on wyke beck?
Top

I have to admit that I love this thread .......... perfect combination of reminisces, blind alley, memories, questions, research and banter.I laughingly referred in my last post to Time Team, but in all seriousness there was a really interesting programme in the 2011 series that is very relevant to the Roundhay/Seacroft Bloomeries and Iron Foundry story; Episode 5 ‘The Furnace in the Forest’: Quote: Dense and tranquil woodland in the County Durham countryside seems an unlikely venue for Time Team's investigation into the earliest days of the Industrial Revolution. But 200 years ago Derwentcote was at the heart of an iron and steel-producing complex that fuelled the spread of empire. Still available on 4onD to see:http://www.channel4.com/programmes/time ... /series-18 . Very interesting programme and lot centres around understanding the management of the watercourses, early iron working and quite pertinent to this thread!There are some interesting questions raised in Parkie and Warringtonrhino's recent posts that I hope I can address in due course
Top

So time to return to the Wyke Beck and its leats!For the moment I would like to cement my thoughts.I have been pondering them occasionally through the winter and more recently prompted as ever by Parkie and now Warringtonrhino posts.I am not sure I have anything new to add but would like to consolidate my current thoughts!I am now firmly of the opinion that downstream of Easterly Road that the original course of the Wyke Beck has been diverted into two separate mill leats/goits and by the mid 19th Century the beck no longer ran along its original course.In the first instance take a look at the Seacroft tithe map here:http://www.tracksintime.wyjs.org.uk/tra ... oft.htmand then plot onto the 1st series OS 1:10,560 [see attached above] which neatly coincides with the existing boundary hedgerow shown. I am absolutely certain that the medieval boundaries between Roundhay and Seacroft would have coincided with a physical feature such as a stream before any arbitrary boundary formed by a wall/hedge/fence. I am certain therefore that this hedgerow represents the original course of the Wyke Beck. Next to what I believe to be the orginal leat/goit. Like Parkie and Warringtonrhino I have looked carefully again at the 19th Century OS 1:2500 maps that indicate there were flows in both directions from the weir at Eastfield Cottage [Easterly Road]. The most easterly course of the beck contours along the hillside before meeting Baileys Rein and joining the westerly course [See attached above]. What I don’t think I had appreciated before is the OS surveyors had noted an earthwork following the contour for three paddocks south of Foxwood where the route south is blocked by the 200’ contour at which point I assume that the leat/goit drops down to the westerly course.This is very significant I think as this is the approximate area marked on Taylor’s plan (really just a sketch) as being “Cynder Hills” [see attached above]. It is too much of a coincidence that this route puts the leat/goit outlet so close to “Cynder Hills”, on or about the crop of the Black Bed Coal/Ironstone and most importantly could be achieved without recourse to a dam [which is why I believe it predates significantly the westerly course]. In many respects it’s a very clever piece of engineering collecting water not only from Wyke Beck and Roundhay Beck but also Baileys Rein and other watercourses along the hillside. [edit NB in the attachment at the insert I have referred to Baileys Leat; it should have read Baileys Rein] 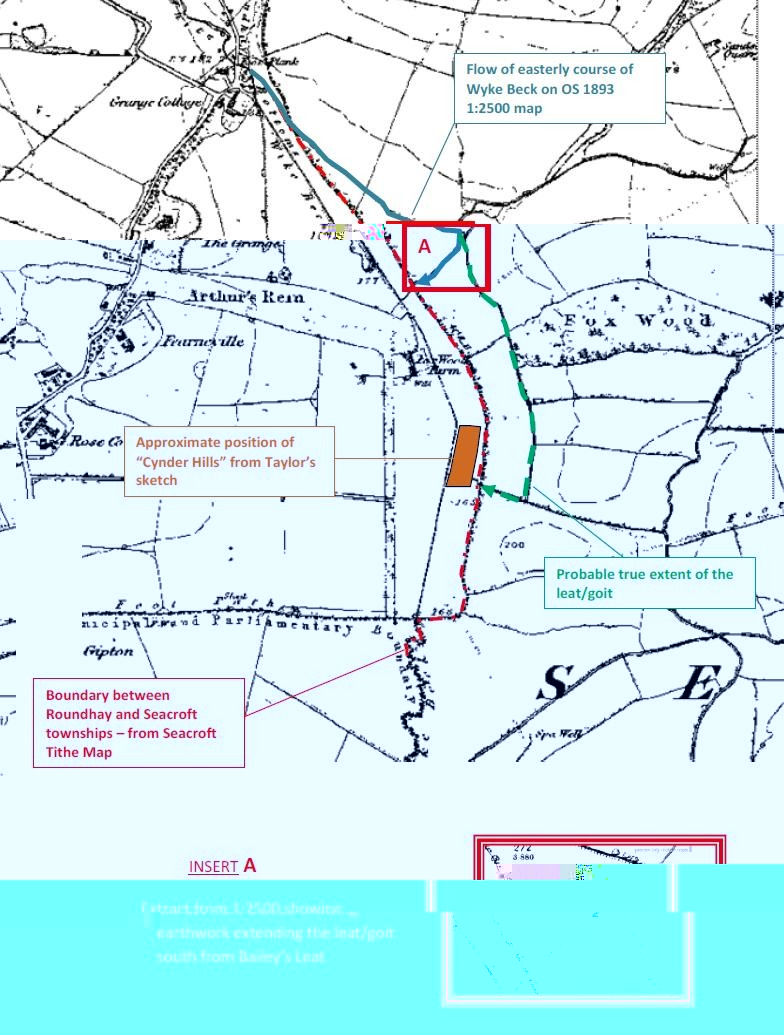 The second leat/goit is the westerly course and more obviously engineered course. I think that this is Mather’s leat/goit. There is little doubt that the weir at Eastfield Cottage is the one constructed by Mather and if one examines closely the 1893 1:2500 OS map the westerly course is clearly an engineered course running south before turning to contour the valley side. His leat/goit had the advantage of relying primarily on gaining a head of water by damming the combined Roundhay and Wkye Beck’s and directing the flow into a channel that would be easier to maintain that a contouring leat/goit while still capturing the likes of Arthurs Rein. [see attached above]One interesting feature is the pond that Parkie identified earlier is the pond to the immediate north of Fox Wood Farm ........ was this part of the same system (perhaps topped up with a leat from Arthurs Rein) used to supplement the flow during low water? Or was it part of a latter mill associated with Fox Wood Farm