As a teenager in Leeds in the 60s I lived through this mods 'n rockers period. Some of my friends were mods and I hung out with a couple of them who had Vespas with dozens of mirrors on stalks and multiple spotlights. Absolutely crazy! Apart from being dazzled from behind even then I was aware of the danger of someone being impaled on all those mirrors in the event of an accident. I used to go to the Carousel which has been mentioned as a mod venue. Everyone remembers the stereotypical mod wearing his olive green parka with the furry fringe but they also used to wear crombie overcoats. I seem to remember that even among the mods there was some rivalry between the Vespa and Lambretta riders.
It used to be said that the statue of the Black Prince had been placed in City Square , near the station, pointing South to tell all the southerners who've just got off the train to b****r off back down south!
Top

ArmleyLass47 wrote: I....Brought back memories with my white lipstick and shorthair longer on one side and a long fringe over one eye. laugh.Thought I was the bees knees. Was that the "asymmetric bob" hairstyle that made Vidal Sassoon famous in the 60's?
It used to be said that the statue of the Black Prince had been placed in City Square , near the station, pointing South to tell all the southerners who've just got off the train to b****r off back down south!
Top

Just missed out on the Mod era by a year or two. My older cousin was right into it, surprise surprise he is still into it. He's an active member of the Crusaders Scooter club Leeds, and he is in his early 60s. He runs 2 Lambretta's and wears a full Parka.Here is a link to the club, some photos might bring back memories for some.http://www.leedscrusaders.co.uk/photos.htm
Where there's muck there's money. Where there's money there's a fiddle.
Top 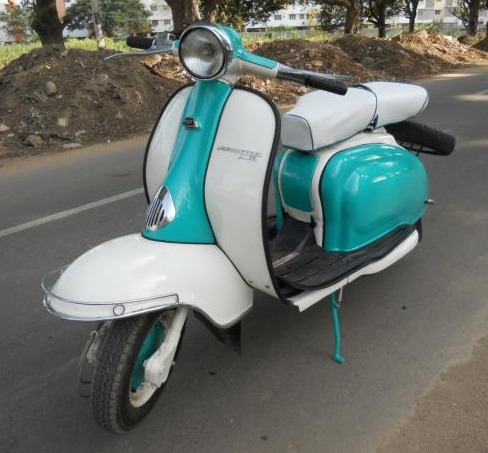 Si wrote: HelenG wrote: My Dad had a Lambretta scooter in the early '60s, tuquoise and cream. Turquoise and cream Lambretta, early 60s model. Thanks for the pic Si, very similar although the predominant colour was turquoise as I remember it in the dim and distant past. Shame he didn't keep it
Top

I remember seeing a chrome scooter in Leeds, blinding in the sunlight. Must have been a bespoke job.
Is it me or has Leeds gone mad
Top

ArmleyLass47 wrote: I was a mod in the 60's and went to the cafe bars and clubs mentioned. Loved the Three Coins although it wouldnt be allowed nowadays. It was a cellar with no escape accept thestairs which was a danger. I used to go to all nighters thereand the sweat used to drip off of the walls and ceilings. Therewas only one girls toilet and we used to drink orange juice.The mods that did the same scene were either on drugs or not.I preferred the NOT and am still alive to tell the story.I remember when a guy called Rod Stewart came to do alive gig with his friends Long John Baldrey and someonecalled Reginald Kenneth Dwight. We all know who he became laugh.Great days and could we dance - all night - dont know howwe did it? I also used to go to the Shed at Elland Road. My friend and Iwere some of the only girls who went in the middle of all theblokes and when they pushed forward when a goal was scoredwe generally landed on the floor and then picked up bythe guys around us. It was a laugh, but I now realise it wasdangerous. Didnt like Greasers as they were not into Motown. Brought back memories with my white lipstick and shorthair longer on one side and a long fringe over one eye. laugh.Thought I was the bees knees. Did the 3 Coins not sell alcohol or did people just choose not to drink and use other, er , stimulants instead??
Top

RockersMods ~ I do believe there is a Lambretta under the mirrors"Youngsters with motorbikes bought on credit and with no training, in a nuclear armed world at the brink. Their home was 'The Ace' and their motto was live fast, love hard, die young. Then came Father Bill and the 59 Club, now with an identity, they were called Rockers!".
Is this the end of the story ...or the beginning of a legend?
Top

This is what some of the old Leeds Bikers (Rockers) do todayhttp://www.thescarboroughnews.co.uk/news/local ... -1-4563475
Is this the end of the story ...or the beginning of a legend?
Top

Cool photos Buffalo (which one's you)Driving AWAY from a sunset on the mirrored scooter would be risky.The last Rocker on Mod attack I ever saw was sat eating my chips at oakwood clock circa 1979.A group of scooter Mods were parked outside Oakwood chippy (photo c/o philld) when some black leather Rockers (riders+pillion) came past, and slowed.We expected a shooting.The rear pillions were armed with bags of flour (or Anthrax?) and chucked it over scooters+ mods. We suspected that there was a history to this and had too much beer on board to be useful witnesses.
Top
Post Reply
58 posts