Off the subject a little and my condolences to Chris regarding the loss of his Grandfather. as regards to his collar number 353. It seems to strike a chord that the Police emergency, or similar many years ago was Leeds 35353 or am i way off the mark ? ( again )
Top

Condolences on your loss but it's good to hear that he lived to such a great age. Mr Hepton was my DCI when I was moved from Dewsbury Road Plain Clothes to Ireland Wood CID in 1972. He had a very dry sense of humour. In those days the divisional DCI's were in constant fear of the monthly crime figures which affected whether they remained in CID. (A cut in the establishment of DCI's from six to three made their jobs precarious.) The DCI read the crime book each morning on the CID "parade" as the briefing was called in those days. One morning, there had been some sort of a disturbance in a chip shop and there were several crimes recorded for assault and another for criminal damage when a brick had gone through the plate glass window. The next few crimes were the usual run of burglaries and then he broke off and gasped "In off." (For non-snooker players this is a foul shot.) It was another crime about the chip shop: the brick that had gone through the window had bounced off somebody's head, causing further damage inside the shop.

Sadly, Mr. Hepton was transferred back into uniform but happily, a couple of years after amalgamation, the chief constable of the new force, Ronald Gregory promoted him to superintendent in 1976 IIRC. In fact, I was one of a number of supervisory ranks who packed the gym at the then new Millgarth Street to be given a mass [email protected]@@@@@@@g for some reason I have forgotten. Anyway, he announced two promotions to superintendent, explaining they were the chief inspectors with the least and longest service in the rank. Obviously, Mr Hepton was the latter and people were pleased for him. In those days, promotion to superintendent brought with it a big pay rise so although he was promoted quite late in service, it will have boosted his pension during all those years of retirement.

Leeds 35353 was the number of the main switchboard of Leeds City Police.
Top

ChrisHind wrote:Hi Ian,
Thanks for that yes he was a great man who had a great life sorry I forgot to mention his collar number it was 353.
Chris

I remember Mick Bradney having the number 353. Sadly, he died in 1992, aged just 52yrs. He was an Inspector when he retired.

Thanks for that jma.
That shows that i'm not quite ready for the rubber knife and Fork just yet.
Top

My Grandfather was a Police Officer in the Leeds Polce and died in 1934. he lived with his Wife at 7, New Church Street and i would like to know just where this was.
It souunds a bit like Leeds 10 area but that would surprise me as he seemed to live East Leeds, including being the Landlord of the Great North Eastern Hotel ( which sounds rather grand but really was a large Pub off Church Rd. overlookiing the Bank. )
Top

Don't know if this helps, but there was a New Church Place running East off Mabgate towards St Mary's Church and school. Found on a 1960s A-Z.
Top

Its as Jim states off Mabgate, here's a map from 1900 and today in comparison 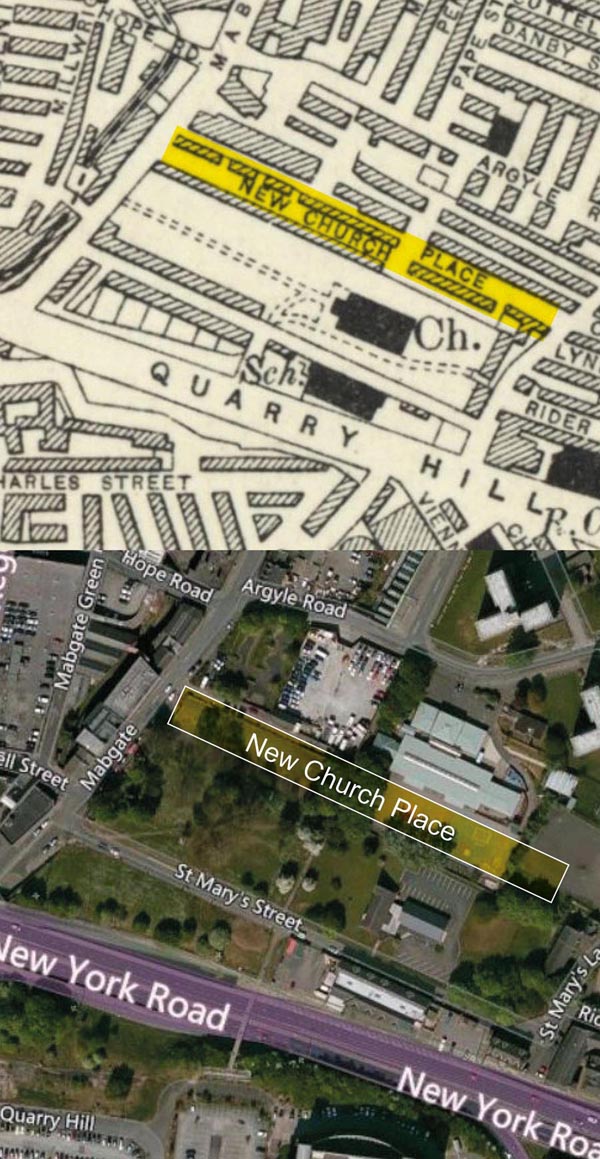 Thanks to all for that information.
Top
Post Reply
207 posts