Anyone remember Character Hairdressing , near St. George's Crypt?The guy that owned it was called Derek"Tamla"Barnett, and that was his real name, well the Barnett bit, anyway. An absolute nutter as I remember, and still organizes an annual reunion for Leeds mods. He later openened up a shop on Queens Arcade balcony in the early 70's.Also Ken's next to the Odeon was a lively place. Ken was a born entertainer and story teller and did a tremendous Basil Fawlty impersonation. A haircut was secondary to the visit. I took the risk of having Ken as my best man when I got wed, but the lad did a great job.And what about Frank's International near the Duncan? Did he have shops in Paris, Milan or New York?Hope I've left a few for other posters to go at.
Old Mods never die, they just semi retire.
Top

I think I've mentioned him on here before, but as it's a dedicated barber's thread, I'll mention Alf Learoyd of Armley again.Very old fashioned (even in the 60s) with cut-throats, tapers, red leather and chrome barber's chairs and hot towel machines. He was short, with greased hair (macaser oil?) and a pencil moustache, and I remember he was never seen without a Capstan full-strength between his lips. I'd get a haircut early in the morning (God knows what time he opened) and when I got to school, I'd stink of smoke and be covered in fag ash (aged 7!)
Top

This'll be a good thread, I've seen loads on Leodis. I'll post 'em as I find 'em again. Here's one of my favourites... ... View of Westfield Hairdressing Saloon at number 1 Westfield Road, adjacent to the Ninety-nine Steps seen to the left. This was the business of J.W. Hyatt from 1901-1913, he then moved to premises at no.7 Burley Road from 1913-1940. Various signs outside the shop state 'Umbrellas repaired and recovered', 'Childrens hair carefully cut' and 'Shaving, fresh water for every customer'. Jack Hyatt can be seen on the left next to the man in the bowler hat, called 'Ignatius', a well known man in the Burley Road area at the time. Jack Hyatt was a founder member of the Westfield cycling club and was a keen photographer. Here's another ... ... ... 18th April 1923. Showing two retail premises on Botany Bay Place at the junction of Canal Road(Armley). The premises on the right is Charles Coakley hairdresser and on the left is Moran Valentine Confectioners. On the front of both shops are retail advertising signs and posters. 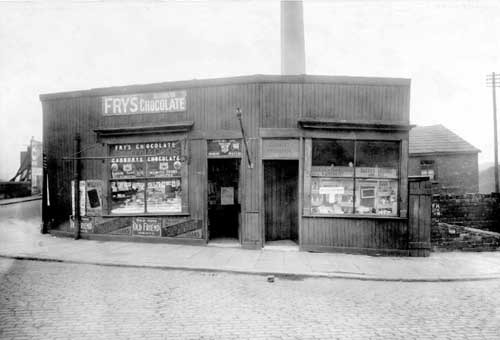 There was one at the top of Canal Road (Armley), just a tad down from the Golden Lion pub. It was called 'Jim's Edwardian Tonsorial Emporium' and this place was very olde worlde inside. Jim the barber was a very Edwardian looking man with a handle-bar moustache, and the decor was typical Edwardin stylee. anyone remember this place?
Sit thissen dahn an' tell us abaht it.
Top

Forgot to mention Leon's in the Merrion Centre on the balcony.The owner (presum Leon) was a big Greek looking guy with thick glasses and he used to spend all day looking over the balcony at the passers by. I guess he never had any customers 'cos every time I passed(and I worked in the MC), there he was, ciggy in mouth.
Old Mods never die, they just semi retire.
Top

Franks International was a legend "Need a new stlye ? We specialise" They used to have copies of Mayfair and Fiesta everywhere, and one of the girls put out a cigarette in the sink while she was washing my hair !
Top

Can anyone remember Tassys? He was down a yard in Briggate opposite Boots in the 60s, I remember going there about 68 and having my hair cut like Mary Quant I think at the time he was the only one where all the mods went and you had to book 2 weeks in advance to have him cut your hair.
Ex Leeds Lass
Top

Mad malcolms harehills lane................nuff said! lolyou used to sit in the aeroplane while malcolmhacked at yer ears,i can still hear him now......WILL YER KEEP STILL YER LITTLE BUGGER!
There are only 10 types of people in the world -those who understand binary, and those that don't.
Top

I'm a hairdresser and I'm 50 in a few days!!! does that qualify as an "old hairdresser"
Top
Post Reply
98 posts