i walk past the memorial infront of the parish church on the way to work everyday and just wondered what happened to him? anyone know? thanks anyway
Top

This is spooky cos i was driving down Stony Rock Lane yesterday and just as i was passing the Anglers i remembered id seen the killers running past there just after it had happened.I believe they had come up past the Woodpecker,up towards the Hope,over York Road and down through Burmantofts coming out at the Anglers club,then across to Lincoln Green i think.Its only a distant memory,seem to remember it being a sunny day as well.
Don't get me started!!My Flickr photos-http://www.flickr.com/photos/cnosni/Secret Leeds [email protected]
Top

I was on duty behind the counter at Headingley Bus Depot when it happened, and it shocked Leeds - such things were not routine daily in those days like they seem to be now.I may be mistaken, but wasn't the culprit that wicked Barry Prudom who later topped himself in a hostaged elderly couple's garden at Malton or Pickering as the Police marksmen closed in ??
There's nothing like keeping the past alive - it makes us relieved to reflect that any bad times have gone, and happy to relive all the joyful and fascinating experiences of our own and other folks' earlier days.
Top

Yes,it was Barry Prudom later shot dead by police (see other threads for more details on him).
Steve JonesI don't know everything, I just like to give that impression!
Top

It wasn't Prudom, he did his thing over at Malton.Richard Gricewith was the killer of PC Speed.Gricewith was picked up following a raid on a supermarket, his gun went off under his coat just around when he was arrested, but the coat covered it all up and he died later on.If I remember rightly, there had been a series of raids on supermarkets which had netted pretty large amount of cash and there was a special police unit set up to investigate them.I'm also pretty sure they didn't connect him to the murder of Speed until after Gricewiths death - poice went to where he lived , a small run down farm or scrapyard somewhere in North Yorkshire, Sutton on the Forest. I also think they ended up arresting a few others, turned out that Gricewith had been doing armed robberies for a long while.I have ridden past the place many a time when I used to cycle race - there is a 50 mile time trial route that goes through that area, and comes back to start and finish at Easingwold.This link shows him as David Gricewith, but I am sure it was Richard.http://www.yorkshirepost.co.uk/news/Kil ... .716050.jp
Top

Even though I was only a youngster back then, I still remember the BBC Crimewatch reconstruction of this terrible act, I seem to recall a police car chase, when the officer asked for permission to ram the escaping car.Every time I enter that area of Leeds, even now I still think of Mr Speed, and his family, its strange that some events stand out in your mind......
The Health and Safey Executive." Striving to take the fun and enjoyment of life away from us all "
Top

i stand corrected, sorry. funny how the mind plays tricks!
Steve JonesI don't know everything, I just like to give that impression!
Top

This is a photo that I took on March 28 2017 of the memorial to Police Sergeant John Speed, on Kirkgate opposite Leeds Minster. It seems unbelievable that it is already nearly 33 years since he was murdered. 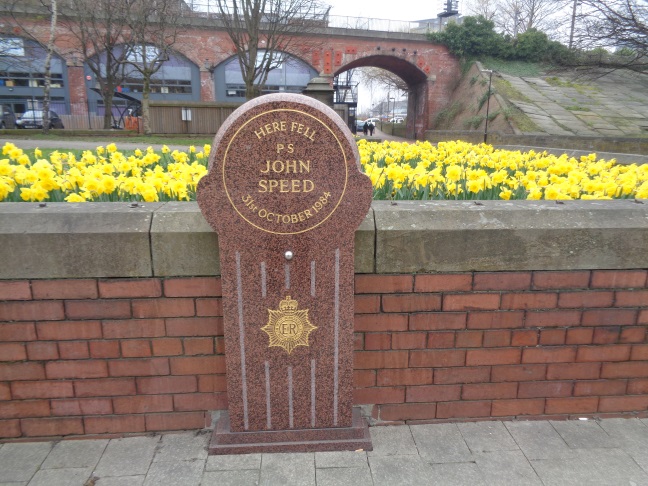 Like a lot of other Leeds officers, I knew John Speed. He was a PC at Dewsbury Road when I started there on a different shift but he soon moved to CID elsewhere in Leeds. I was moved onto his old shift to even out numbers but I'm pretty sure that was after he had been transferred. When I eventually made it into CID, I worked with him for a single day doing murder incident room enquiries. Like many other Leeds City Police officers at that time, I bought (started buying) my own house at Garforth in 1969 and a bit later, John bought a house just round the corner. I don't claim to have known him particularly well.

In 1984, I was working at Headquarters in Wakefield when our assistant chief constable who was a fairly recent arrival from Liverpool came into the office and broke the news that two officers had been shot in Leeds and that John Speed had died. The chief inspector who shared a desk with me had been his shift sergeant at Dewsbury Road and struggled to hold back his tears.

With a lot of other people, we attended John's funeral at Leeds Parish Church, just across the road from where he had been murdered. One of my jobs that year was editing the chief constable's annual report. We used a photograph of his cortège on the front cover.

Here's a leodis link to a similar picture of John Speed's memorial erected by the Police Memorial Trust.

(The Leodis comment about moving his memorial from Millgarth to Elland Road refers to memorials to all murdered police officers in West Yorkshire erected by Chief Constable Colin Sampson in their own police station.)

When John Speed was murdered, Barry Prudhom had already died. I was working at Dewsbury (the town, not Dewsbury Road) and I was part of a huge posse which travelled from West Yorkshire to Malton to assist our colleagues in North Yorkshire.
Top
Post Reply
17 posts