Some earler posts have said that Grandways on Dewbury Road was near the bottom of the said road. Though the fire station was opposite was the Crescent cinema ( now a knocking shop ) the Supermarket was next to the New inn pub and no where near the bottomof D/ road. before it was built it was a large house docors surgery and when i put my house up for sale the two Docs came round and bought my house for their housekeeper as the propertywas to be demolished and a Grandways to be built in it'splace.This be around the mid sixties..
Top

There are a few pictures of said store on Leodis, here is just one with the New Inn public house just out of shot on the right. 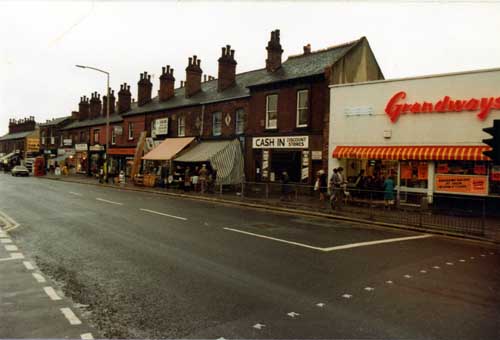 During the school summer holidays I used to work at a Supermarket on Roundhay Road. I am sure that it was called Grandways...

This is a list of Grandways Stores from around 1970 – 1984, but there may have been others, which opened and closed:

The Police involvement was mainly to do with shoplifters who were constantly arrested and charged or summonsed with theft, every day.

In the 1970’s, I remember a store detective, employed by Grandways, who seemed to catch more people stealing from their stores than the rest of the Grandways store detectives put together. Her name was Jeannie Dyson and she was brilliant at her job. She would watch the thieves, detain them and then phone for the Police who would take over the arrest, detain the suspect at the Police Station, interview and charge or summons them and Jeannie would be used as a witness.

I remember that the charge was always worded about the time, date, location, allegation, etc., and then ‘the property of William Jackson & Sons (Hull) Ltd – contrary to Sections 1 & 7 Theft Act 1968’ (previously, the law was under the Larceny Act 1916). This was the parent company of Grandways and dated back into the 1800’s. They also traded under the name of William Jackson & Sons Ltd., Jacksons Stores and also Jacksons.