searching the site and adding comments

Chris Youhill (Blakey) was an Inspector at Headingley Garage for many years, I never had many dealings with him as I was based at Middleton Garage until its closure in 1986 (Deregulation of Buses) and was then transferred to Torre Road and finally Kirkstall Road until 1997 and I then finished after 25 years.
I am sure that you will know that Chris originally worked for Samuel Legards until its demise, and was very sorry to see the end of an era. There were also many other Bus Inspectors and drivers or conductors on this site (eg. Amber) and they have all disappeared since the site was shut down whilst it took a break to be updated and resurrected.
That's progress I suppose as all the Social Media sites take over, and generally they are easier to use for contacting members and posting pictures where there are mainly no limits on the amount of pictures which can be posted at any one time.

Below is the Christmas Bus I worked in 1981, and now my hair is that colour 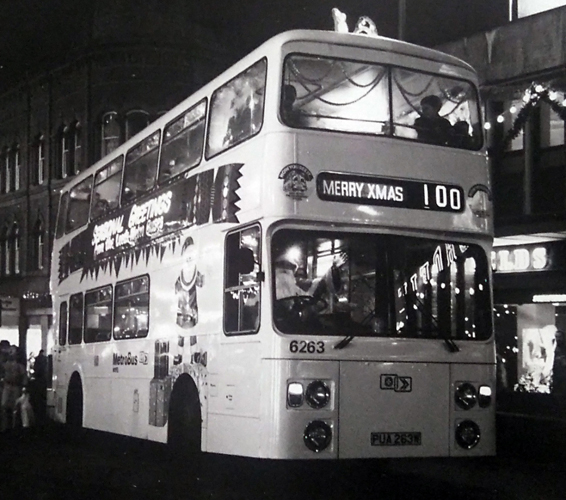 Do you know if Blakey is still with us he is one of the members i was thinking about regarding no posts, the last time i met him i picked him up to go to a S/L meeting a few years ago.
No matter were i end my days im an Hunslet lad with Hunslet ways.
Top

Without stalking too much "Blakey's" Facebook timeline was last updated almost 12 months ago. I think that doesn't include other contributions but as I say, not stalking too much
living a stones throw from the Leeds MDC border at Lofthousehttp://tykebhoy.wordpress.com/
Top

Hi tyke bhoy The thing is members are like friends, it just makes you wonder if they are ok i just wanted to know if anybody knew how he was.I did not want to pry into his business i suppose its none of mine but i would have liked to have known if he was ok.
No matter were i end my days im an Hunslet lad with Hunslet ways.
Top

FAO Simon -z- Hi Simon if you’re looking for information about streets and buildings in Leeds and various areas of Leeds have you tried Leodis? It’s run by Leeds libraries and has 1000s of photos mostly taken by engineers of streets and buildings and some have comments added by people who knew the street/area. A lot of photos are of streets/buildings that have been demolished and some are up to date.It’s a very interesting website that you may find useful!
Top
Post Reply
25 posts