by Cropper
Aunty dot lived at the top of Shoalbrook Avenue Leeds 7, in a large detached house. She wore mens suits a white shirt and tie and a black beret, and chain smoked. The house was used as a theatrical guest house. All the stars from the Grand Theatre stayed there. Every year in summer she held a tea party for all the local children. About 50 of us sat down in the front garden for tea and cakes. We had party games and a Punch and Judy show. A group photo was taken each year of us all. My copy has long since been lost. So I wonder if anyone out there has one. Anyone who lived in the Shoalbrookes, Reginald Terrace or St Martin's Lane in the 1940's may have a copy. 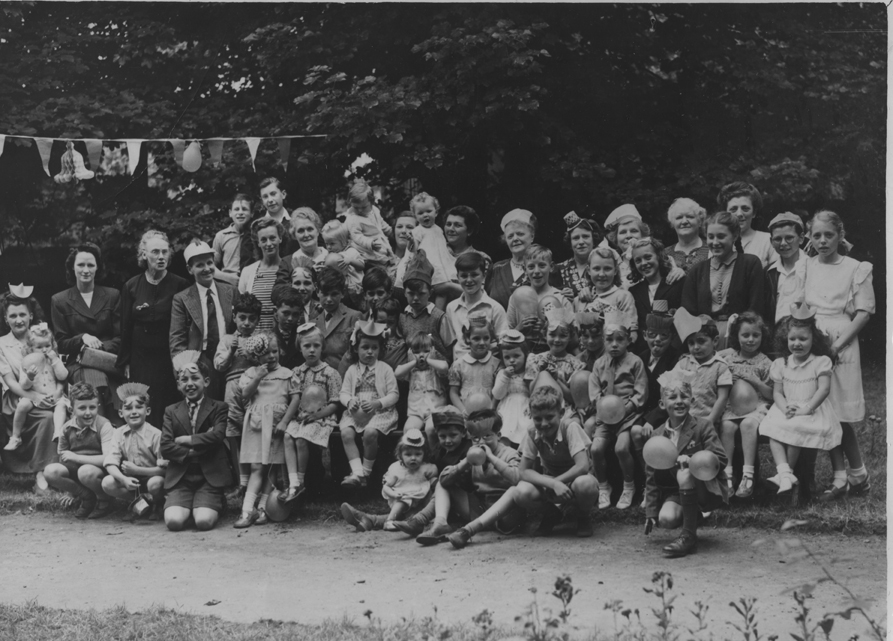 Recognise anyone in this photo?
Me squatting second left front row. My mum behind me with my little sister on her lap. Aunty Dot in peaked Capi and tie. My other sister on the end next to Christine Caffin.

by volvojack
In the 60s to the 80s my Brother was a Variety Agent who handled acts that were either "On the way up or on the way down" for instance he had Tony Christie, Freddie Starr and acts like them until the bigger agents from London took them over.
Alsso like Matt Monro and even P.J. Proby when they were past their best.
His market place was small Night clubs or Large Social clubs around Yorkshire. If they were working local they were always accomodated in a large house in the vicinity of where you describe by a Lady called Mrs. Dolan, i wondered if there was any connection. Sadly my Brother has passed away so can't confirm anything else.

Lovely picture from an age that will never be seen again.

by Cropper
Yes this photo is in the garden of 73 Shoalbrook Avenue. She was known as Auntie Dot to us lot who lived next door. I remember Ginger Rodgers and Moira Sheerer staying there. I think Mrs Dolan was the house keeper at the time and took over when Aunty Dot died.
All times are UTC+01:00
Page 1 of 1