Your favourite days out round Leeds
Post Reply
191 posts

Caron wrote: tilly. Pity you're not nearer to me as I'd let mine go to a good home. Too heavy and fragile to post up to Leeds though. My 78's aren't RnR though. I've an original Ink Spots and Platters (I think) lol.     Hi Caron Thanks for the offer the Platters now that takes me back to a time i will never forget.I remember when Rock Around The Clock came out we had never seen anything like it we were dancing in the aisles i was only fourteen or fifteen at the time, the bad old days i must have missed them.
No matter were i end my days im an Hunslet lad with Hunslet ways.
Top

Any one remember H B Suggs on Boar lane opposite trinity church? They sold sports good and records
I worked there as a Saturday job in 1964-5, never got paid in cash but in the old records that were out of the "Hit Parade"
Still have some,,,and some that have not been played!!
Top

oldleedsman wrote:Wasn't Virgin first on Queen Victoria Street, when it was a proper street? Same side as Bodleam used to be. Upstairs in Virgin they had a large seated area by the window with comfy cushions and headphones so you could listen to lps.Vallances had an unusual selection downstairs and had listening booths from the 60s.I also used to go to Project Records in Harehills where they sold second hand records. There was a 2nd hand place in the Grand Arcade halfway up on the left - anyone remember its name? Boots used to have a good bargain rack.


My memory of Virgin Records Leeds is that it was on the corner of Kirkgate / Fish Street (see attached pic for recent image) and that it was Scene and Heard that was on King Edward Street. Unless Virgin was located somewhere else circa 1976, which is my earliest memory of the shop.

I came across this picture a while ago. I don't recall Belton's but older SL-ers might. Does it ring any bells? 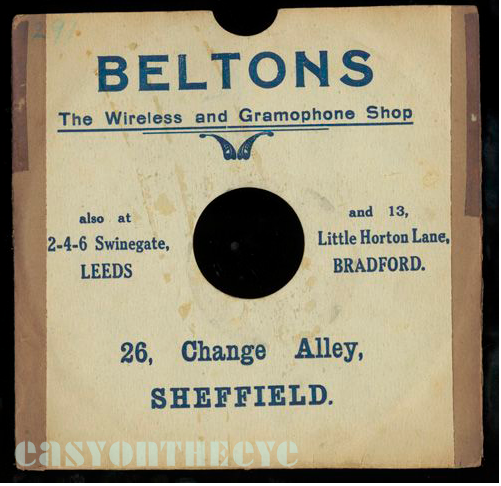 
Also, I seem to remember the Virgin shop, about 1974, being on King Edward Street - same side as Cantor's furniture shop.
Top

Just found this and have enjoyed all the 18 pages, Brilliant, Quite a lot of the posts are after my record buying time but still interesting reading through.
When my Pal and I joined the R.A.F. in 1954 we had girlfriends who worked at Hartleys record Store and they used to post the Top 10 records of the week to us every week. these were 78s, very heavy but somehow never arrived broken. as my wage was 29/- ( £1.50p.) a week flogging this music to the lads came in very handy.
Top

Looking at that picture of Belton record shop at 2, Swinegate it is probably pre the second word war 1939 as I spent much of my time as a youngster in Leeds centre and worked at approx. number 10, William Stembridges (Tailoring) from about1951.
Top

Many years ago there was a record store just above the Scala Cinema in Albion Place (?) and if you asked to listen to an Album they let you take it into the Booth to play and listen. sadly for them this led to people who had recently purchased an L.P. and scratched it asking for the same L.P and surreptitiously swopping inside the Booth and exiting rather quickly.
Honestly.. I never did it personally.
Top

volvojack wrote:Many years ago there was a record store just above the Scala Cinema in Albion Place.

volvojack wrote:Many years ago there was a record store just above the Scala Cinema in Albion Place.

That would be Hartleys, on the corner of Albion Place and Lands Lane.

I am surprised at that Jim, the girlfriends who worked for that company worked if I recall correctly in either Queen Victoria St or maybe near the Market as we used to meet them outside Sillers pram shop, corner of Vicar Lane and KIng Edward St.
( Never had occasion to go inside that shop in those innocent days)
Top
Post Reply
191 posts