The Duchess of York

It died off in the late 90's when a lot of younger people got into dance music, and also younger bands coming through got jumped up ideas of their own importance and wouldn't be prepared to spend formative years cramped into transit vans travelling around the country for months on ends.Promoters also changed the way they did things, I remember John Keenan once saying that they used to give him bands as they started out and once more before they became more famous, so often on the second pass through they would pack the place out and help subsidise the quieter nights. Instead these bands went to the cockpit or Poly once they could fetch in a few hundred.There were some good bands there, but it wasn't the best in terms of layout, on a crowded night you could be stuck around the corner. As a player I'd also prefer somewhere like the Packhorse or Royal Park, because you'd only have to charge people a quid to get in to cover costs, so more would come down than would to a £3/£4 at the Duchess.It was 'dead' some time before it left the building, the last few years the roster was packed with tribute bands and crap battle of the bands type events, nothing really to see.I have a couple of the old calendar style flyers still somewhere, if I ever get my scanner going again I'll have to upload them.I still remember the sign attached after it had closed 'Oakgate Developments - Breathing Life into the City'. Bit of a lie that, wasn't it?
Top

I agree that by the time it shut it was past its sell-by date. For me, its 'golden years' were around 88-92 (or were they just MY golden years ). And it wasn't a great venue acoustically - the sound tended to die once it got back to the lower ceiling-ed bit by the bar.
"This is the North. We do what we like."
Top

sulkycat wrote: lee, i might have to take zebs home in a suitcase with me

He'd probably fit in one too, bless him. Y'know, it's really strange being in a band with a guitarist half my age...still, I'm sure the laydeez in the audience prefer watching him to gnarled old buggers like me! Quote: and a most excellent list of music influences Why, thank you kindly! If you're not doing anything on Sunday 21st October, we're playing an afternoon gig at the Duck & Drake supporting an American guitarist called Adam Bomb. It's free in and we're on at about 4pm... Quote: i quite like what used to be the mixing tin (cant remember what its called now), reminds me a little of the old days coming through to leeds to go to adam and eves, & being chased to the train station by irate skinheads! The Mixing Tin is called Trash now. It's a nice little place, but doesn't quite have the authentically fetid ambience and wonderfully scuzzy clientele that Adam & Eves/Scrumpies had... Aye, I remember dodging the roving skinhead gangs, luckily I didn't have to go as far as the train station, just over the road to the Vicar Lane/Markets bus stops.
Top

thanks for that mr rattybag, am on half term then so no aching head to take into work on the monday! will most likely be the aging saddo on my ownio!
Top

Yeah, I have seen some bands in my time at the Duchess. Some good, some crap and some where even the offer of free could not get me to stay.I was one of the lucky sods who saw Nirvana there.I don't know about videos of it, but I have an audio recording of the gig, or most of it anyway.
Top

jf wrote: As a player I'd also prefer somewhere like the Packhorse or Royal Park, because you'd only have to charge people a quid to get in to cover costs, so more would come down than would to a £3/£4 at the Duchess. I disagree totally with that; the advantage the Duchess had was its location. It was much easier to get people to come to the City Centre than trek all the way up to the Packhorse or the Royal Park. Not to say they're not good places to play, but it's more of an expedition to get to them.I played my first gig at the Royal Park, when the gig room was upstairs rather than in the cellar. Ah, good days.
Top

It’s good to know the Duchess lives on here at least, Hugo what have you done. Reading these posts don’t half bring back memories of many gigs, bottles of brown followed by a day or so of tinnitus. Was one of the sweatiest places to see gigs and when full was a struggle to get past the bottle neck and into the main stage area..Just seen videos of Nirvana in Leeds on you tube, must be the DOY as the stage divers were just walking onto the stage right, no bouncers, joy.The Nirvana gig was the stuff of legend by the time they let me in to the place. I remember Radiohead were always supporting people for about two years such as The Frank and Walters and if memory serves Sultans of Ping FC, where’s me jumper? They finally headlined and Creep really took off soon after.I’m sure that when DOY shut the gigs were meant to move to Scrumpies? I thought that the same people owned Scrumpies and were meant to put on bigger and better gigs at the new venue. That reminds me of the broken toilet in Scrumpies, what a place.I’m sure that someone at Leeds City Council hates the live music scene as places like DOY and the T&C really should still exist in centre of Leeds, am I wrong??
Top

Yeah some guy on Skyscraper reckons that Leeds has the best music scene not only in Yorkshire but the whole country!!!!.Sorry but even though i am a biased Loiner i can definiteley state that the music scene in Leeds is pants,and before we go to a national comparison we only have to look at Sheffield to see what a good music scene is.Chuff me they are now getting a Carling academy along with the Leadmill etc and what have we have got? the Roscoe and the Cockpit.Not good enough.Live music is real music,not some tosser with headphones in a trendy bar playing a song on vinyl ,that they have not even written or played on, to an audience of easliy pleased vaccuous morons drinking Vodka and Red Bulls.Thank chuff for the Kaisers,a real live band that are refreshingly new in their old fashioned approach to music. Not only are they excellent musicians but they are also top show men.By the way Scrumpies was pants for gigs,i should know as i spent most of my teenage years there in the 80s.
Don't get me started!!My Flickr photos-http://www.flickr.com/photos/cnosni/Secret Leeds [email protected]
Top

Duchess couldn't hold a candle to the Fforde Grene on Roundhay Road - That was the launching pad for SO many bands. If you were a success with that HEAVY crowd there, you'd be all over the New Musical Express, in the 70's. 5 mins of fame guaranteed!If you couldn't please the crowd, you'd be bottled offstage and your transit would have its tyres slashed in the carpark!
Top

I've managed to track down a couple of Duchess flyers stored with my old band stuff. Brings back many memories of checking the big poster in the window to see who was playing. I was in the long forgotten pop/rock combo Floozy - yeah I told you nobody would remember us! 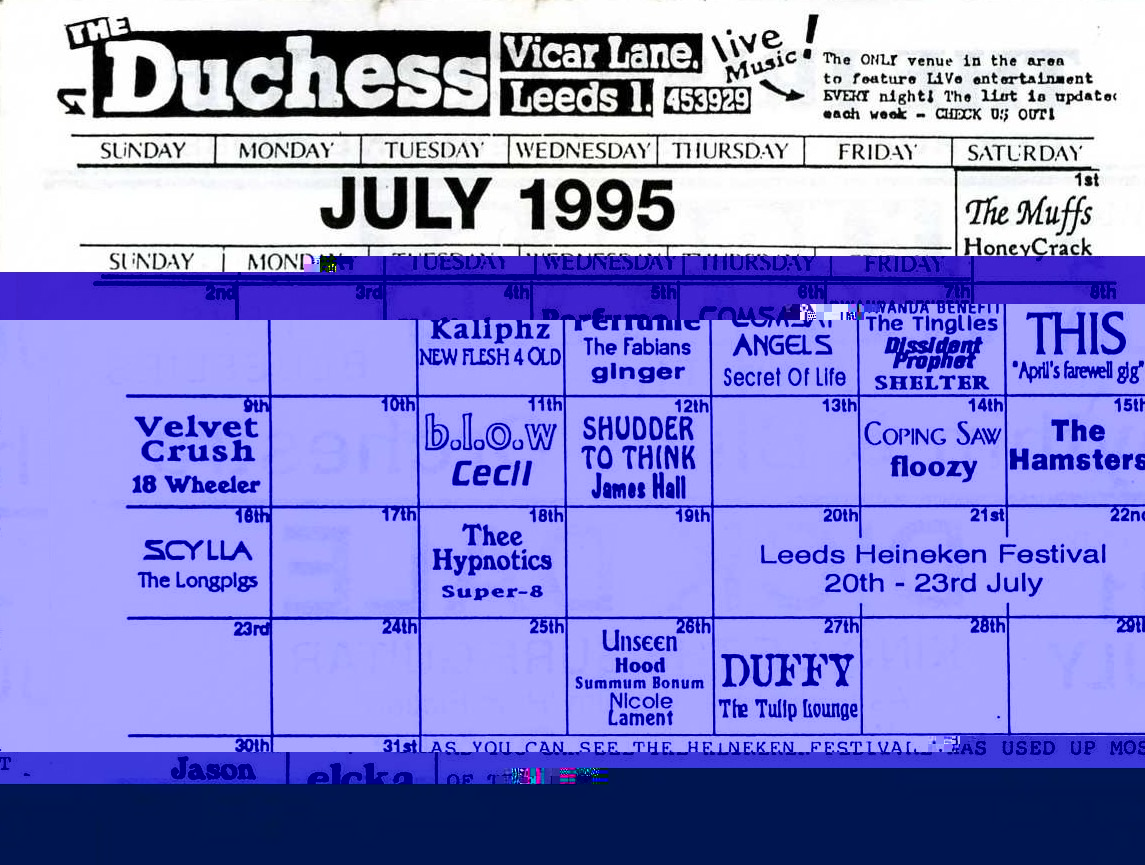