Though I am occasionally recently in the Bridgewater Place area I have gone no further than its Victoria Road frontage and Water Lane side so I decided to go a bit further which I did on November 14 2017. Going on Victoria Road shortly after passing Bridgewater Place I was quite surprised to see an old looking pub that I was not aware of, namely the Grove Inn. A side wall of the pub is seen from Victoria Road but the pub's main entry/exit is on Back Row with a lesser entry/exit on the Stone Row side road off Back Row.

I don't know how long the pub has been there as it is not labelled on an 1921 1:2,500 map I've seen but it could be that it is not labelled due to the map scale. I've found an image in the Leodis website that has Grove Inn on a photo taken on 12 September 1938. It is good but surprising that an old pub still survives in such a massively developed area. It is rather though dwarfed by such as the very near Bridgewater Place. I wonder if anyone has any old recollections of the Grove Inn, Holbeck? 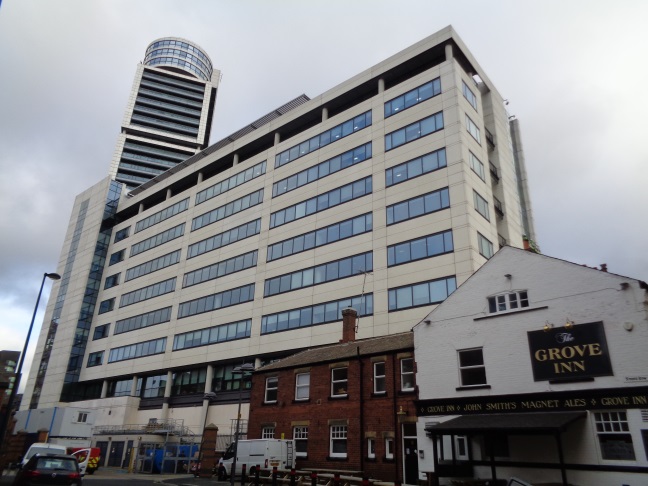 It is in the 1872 directory as a beerhouse which aren't marked on maps. Only Public Houses are marked.

EDIT : On reading this it was there in 1844 http://tinyurl.com/ycwbb5bl
Top

Years ago when the Licensing laws meant pubs closing at 3pm. there were odd times when we would spend a couples of hours behind locked doors in the Grove. My cousin Mac had a Scaffolding business and at Christmas time he would arrange for free food and drink for about 20 or so of his workers (hooligans) and the Grove was the perfect place to hold it.
It has been a Music venue for many years, mainly Country and Western / Folk but there has been all kinds of live music played there. It is a strange little Pub as it has rooms leading off of the main bar. It is many, many years since i have been in there.

Looking at Leodians photographs it is hard for me to believe, as this pub was unique in respect of that it was near the City Centre and yet stood almost on it's own.
Top

Thanks uncle mick and Jack for your help

It's interesting to find out that there has been a drinking place at that location since at least 1844.
A rainbow is a ribbon that Nature puts on when she washes her hair.
Top