Here's a map I've spent over a year putting together.I'm always pleased to hear about places that need adding or removing. There are already quite a few that I've added and removed since this version though. E.g. removed, Hoagy's, added Roxy's, Scene, Inkwell etc. Let me know if you have any other suggestions. Even though I designed this and I'm still not bored of looking at it!You can scroll around the full design here:http://www.albanydesign.co.uk/shop.htm# ... rderaround 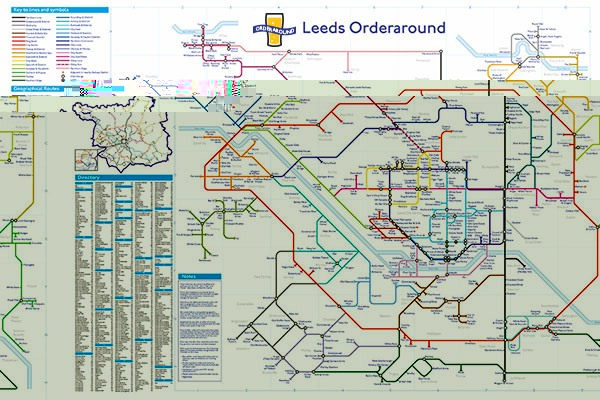 I've seen it in Jackdaw picture shop at Headingley lights, looked good.Watch out though, the moderators frown on 'advertorial'
Top

Hmnn, you won't have seen this one actually. You'll have seen an inferior one that's nowhere near as detailed, extensive or up to date. Mine looks far better even if I do say so myself. I'm from Leeds and the other one out there wasn't done by someone from Leeds.I posted more with a view to getting hints on places to add or remove without having to trawl through all the posts, but I'll probably do that anyway. Besides, it seemed reasonable that people here would be interested in it.
Top

stevelovell wrote: Let me know if you have any other suggestions. Even though I designed this and I'm still not bored of looking at it! Wow, that must have taken a while to put together. Well done!Some suggestions for North Leeds.I couldn't see the Eagle (Sam Smiths pub on North Street) anywhere.The Hub has been replaced by 'The Pit', and is the other side of 'Zed', rather than next to the Mustard Pot.There is a new bar further up on Harrogate Road, after the Queens Arms, called 'G-Wu'. It's part of a restaurant, but I believe it operates separately as a bar (rather than just a holding area for people waiting to be seated in the restaurant).As for the City CentreHoagy's has gone.There is a new pub called 'Tapped' on Boar Lane, and one called 'The Atlas' on the corner of King Street and St Paul's Street. I Couldn't see either of those on your map.I believe 'Indie Joze' was a coffee shop, not a bar, and is in any case long gone.
Top

Good to see that The University of Leeds is proudly tweeting about its former Design student's innovative guide to exploring Leeds.
Top

I've got some books for sale, lol.
Top