Hi Tarkus. Grandad's name was Walter Glendenning and his business partner at the time was Ted Pease.I'll try and e-mail you that map.
Top

I well remember the Smyths (yes we did pronounce it Smythes) Arms on Gelderd Road from my earliest drinking days in 1974. It was very down at heel then but still had Tetley Mild and bitter on handpumps with autovacs. There was a large concert room at the back where folk nights were held and a pool table (new idea !) in the tap room. I preferred the Cattle Market further along at the junction of Smithfield Street. Another fine Tetley house which at that time had new tenants but still had the old handpumps and autovacs. The pub was very ornate with mosaic floors and Burmantofts tiles everywehere. It is criminal that these places were demolished. I believe the Garden Gate at Hunslet still survives untouched, but the city was full of such places in the early seventies. I moved darn sarf (sob!!) in 1978 but both pubs were still open then. The old cattle market itself (see thread) as occupied by Schweppes Ltd then which later became winerite.
I'd rather have a full bottle in front of me than a full frontal lobotomy
Top

Hi Wandered if anyone can help? My Grandparents used to have The Smythes Arms ooo going back 20 odd years ago im now coming up 24yrs old and i was just a baby when they had it...just wandered if anyone knew of any pics of it front on wanting to get one and frame it for my grandparents
Top

Having dug out my battered edition of the fine book "Wortley de Leeds" in which I recalled there was mention of The Smyths Arms, I can add a little information to those interested in this old long gone establishment.It appears the pub was named after the then Lord of The Manor of Wortley, one John Smyth. The pub was just inside the old boundary of Wortley. The Lord of The Manor resided at the manor house which was located towards the top of Greenhill Lane, Wortley not far from and across the road from the gates of Western Flatts Park. In the early 1980s I can recall visiting the pub purely to complete my stamps as part of the "Tetley Pub Hunt"! as it wasn't a pub we regularly went to and there were lovely stained glass windows which are specifically mentioned in Wortley de Leeds as follows: "A fine representation of the Arms of the Manor of Wortley can be seen on the windows of Smyth's Arms public house in Gelderd Road, New Wortley, with the motto: "Nec timeo Nec sperno," which means, " I neither fear a foe, nor do I treat him with contempt".Further reference to the pub appears elsewhere in the book when it mentions a signed "Private Road belonging to John Smith. Esquire". It looks like this road followed a route directly from Wortley Station to The Smyth's Arms practically following what is now Whitehall Road.He is said to have "Had his Manor House at Wortley, and he would come down Greenhill Lane, on and down Dixon Lane, on his "Private Road", call at Manor Farm, near The Dragon and probably have a little business at The Smyth's Arms".Hope this may be of interest. Sad that those wonderful historic stained glass pub windows are seemingly lost forever!
Top

Tarkus wrote: An interesting thread, which has answered a couple of questions for me. I grew up in Holbeck/Beeston, and reckoned that I knew the Cattle Market stretch of Gelderd Road road pretty well (I went to school on Brown Lane). However, since recently taking up a job in the area, it's become obvious that my knowledge is pretty poor. After work, I usually walk into town for the train home, and have taken every conceivable route involving Whitehall, Gelderd & Elland Roads. Most of it is still familiar, despite obvious changes, but the bit that I just can't work out is the original configuration of the Gelderd Rd/Whitehall Rd intersection. So, I have a question:Was it ever possible to cross Whitehall Rd by driving straight along Gelderd Rd, and vice versa? I can imagine that this would have been a very busy area in the days before the Ingram Distributor, so this junction must have been a real bottleneck. There are photographs on Leodis which show a sort of 'central reservation' which appears to rule out a simple crossroads junction, and suggests that a rudimentary gyratory system of one-ways was in operation. An old AA route map of mine shows Spence Lane and Smithfield Street to be involved in this somehow. Can anyone remember the traffic flow patterns around this intersection?Hoping someone can help ...When we lived on Domestic Street, my Dad would sometimes take us in the car to the Crown Cinema on Tong Rd. I remember that the route started with Domestic St & Spence Lane, and finished with a right turn into Copley Hill before reaching Wellington St/Tong Rd. I can't remember the bit in the middle though! If we'd turned left from Spence Lane into Whitehall Rd (at the Corner House), how would we have progressed to a right turn into Copley Hill? I think you must have come up Whitehall Rd from the Leeds direction,turned right to go under the railway bridge which is now blocked off.This led onto Tong Rd where you would have turned left. I remember the horrendous traffic problems in this area in the early 70's.But can't remember the road layout back then. I had just started driving for LCT on the 78 Pudsey- Carr Manor route.It would take forever to get from Ringways to Leeds.
ex-Armley lad
Top

My Dad had an Off Licence on Geldard Road in the 1960s and I remember the Cattle Market and the Smyths Arms neither of which I went in - too young! But there was a little pub, a tiny, pretty ramshackle place, that was on the road from Geldard Road to Domestic Street that I did go in once as an 18 year old and I remember it had allegedly the best pint of Tetley's in the area - well I was impressed. I don't think the pub was the Smyths Arms but unfortunately, I can't remember the name of the road or the pub. Any ideas?
Top

When you drove down Gelderd Rd towards Leeds you had to turn left at the front of the Cattle Market , Gelderd Rd coming from Leeds was one way in this little section . Traffic for Gelderd Rd carried straight on towards Gildersome traffic for Whitehall Rd turned right past the front of the Cattle Market . This was a one way street problem was traffic turning right for Whitehall Rd had to cross to the left lane traffic turning left heading to Leeds had to cross in to the right hand line . Whitehall Rd then was a one way street towards Copley Hill , Whitehall Rd carried on up to the Dragon Bridge between the Cattle Market and Copley Hill Goods Yard . I used to go down to the Co-op slaughter house with tractor & trailer to get the contents of the slaughtered cows stomach plus some bits of blood etc which finished up on the midden . It was a bit of a trick with slow tractor and trailer to cross over the other traffic down Whitehall Rd then right and right again to cross over the traffic on the one way section of Gelderd Rd from Leeds and turn left to the slaughter house which I believer was on a street of Terrace houses , with a Co-op butcher at the front . A few years ago I was parked on the aforementioned one way Whitehall Rd which is now a dead end street killing time before next collection 2-00 in the afternoon in DHL van DHL uniform on , a lady (Female?) walked past have you got a light please , no don't smoke sorry , walked down the road turned round came back are you looking for some business ?? I couldn't believe it then I saw her further down the road getting into a car so she wasn't idle for long .
Top

Chiron wrote: My Dad had an Off Licence on Geldard Road in the 1960s and I remember the Cattle Market and the Smyths Arms neither of which I went in - too young! But there was a little pub, a tiny, pretty ramshackle place, that was on the road from Geldard Road to Domestic Street that I did go in once as an 18 year old and I remember it had allegedly the best pint of Tetley's in the area - well I was impressed. I don't think the pub was the Smyths Arms but unfortunately, I can't remember the name of the road or the pub. Any ideas?     From your description I'd guess 'The Skew Bridge' 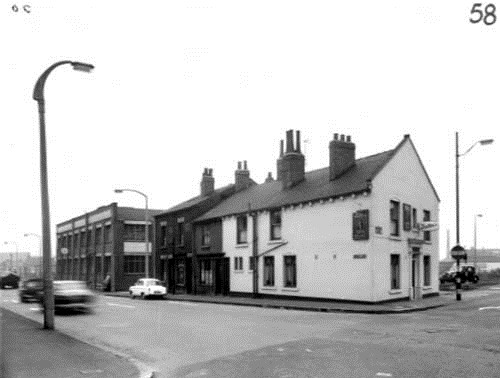 drapesy wrote: Chiron wrote: My Dad had an Off Licence on Geldard Road in the 1960s and I remember the Cattle Market and the Smyths Arms neither of which I went in - too young! But there was a little pub, a tiny, pretty ramshackle place, that was on the road from Geldard Road to Domestic Street that I did go in once as an 18 year old and I remember it had allegedly the best pint of Tetley's in the area - well I was impressed. I don't think the pub was the Smyths Arms but unfortunately, I can't remember the name of the road or the pub. Any ideas?     From your description I'd guess 'The Skew Bridge' Thanks, the name doesn't ring a bell but then I was probably more impressed by the beer than the name of the pub! One of my mates at the time used to pop in for a pint and I think he told us about the beer which must have been impressive for me to remember it all these years later.
Top

Biscuit Tin wrote:Someone has said that the pub up the road from Smythes Arms could have been called the Cattle Market. There used to be an actual Cattle Market on the other side of the road that led up from Gelderd Road to Whitehall Road? Also there was supposedly a bit of rivalry between the two pubs?Hope this makes sense, its been a very long day!!!

I wonder if anyone remembers an army camp, or an army facility further out along Geldard Road, maybe near to where Scweppes place was, or even prior to Scweppes taking over the plot? I only remember it, because a primary school friend's parents, in the army, were located there (I think).
Top
Post Reply
44 posts